Swathes of the New Territories closed up shop on Monday, fearing a reprise of Sunday night's triad attacks on antiextradition protesters.

Paramedics attend to an injured man from Sunday's protest.

Tear gas, rubber bullets and bloody brawls have become all too common scenes on the streets of Hong Kong over the past month-and-a-half, kicked up by the government’s attempt to pass an extradition bill. But the social unrest took a new turn this week, with the operations of malls and businesses disrupted on Monday over fear of triad violence, turning parts of the New Territories into near ghost towns.

The closures occurred after rumors circulated on Monday that gangs clad in white were planning to roam the New Territories and attack anyone seen wearing black, the color of the ongoing antiextradition protests. The district is located close to the border with Mainland China and figures as a convenient shopping area for its tourists.

At least six malls — Yoho Mall, Tuen Mun’s V City, Tuen Mun City Plaza, Waldorf Shopping Arcade, Tsuen Fung Centre and Tsuen Cheong Centre either closed entirely for the day or had severely shortened business hours on Monday, according to local media reports. Malls in Hong Kong often operate until 10 or 11 p.m., but by the afternoon many businesses in the district had shut.

In addition, large corporations including the Estée Lauder Cos. Inc. and HSBC sent e-mails out telling staff who lived in Yuen Long they were to mandatorily leave work early and return home on Monday afternoon as a safety precaution.

The measures were taken following a chilling attack in Yuen Long the night before by a mob, which Hong Kong police said were suspected 14K and Wo Shing Wo gang members.

The attack was mainly targeted at antiextradition protesters returning from a march in the city’s downtown, but the mob, dressed in white, chased down both protesters and other train passengers alike, beating them with metal rods. At least 45 people, including a pregnant woman, were injured, according to the city’s Hospital Authority.

A rally took place on Hong Kong island earlier on Sunday, drawing 400,000 people to march from Causeway Bay through to Sheung Wan. Crowds were eventually dispersed by police with tear gas and rubber bullets around midnight. It marks the eighth straight week of marches in the city. 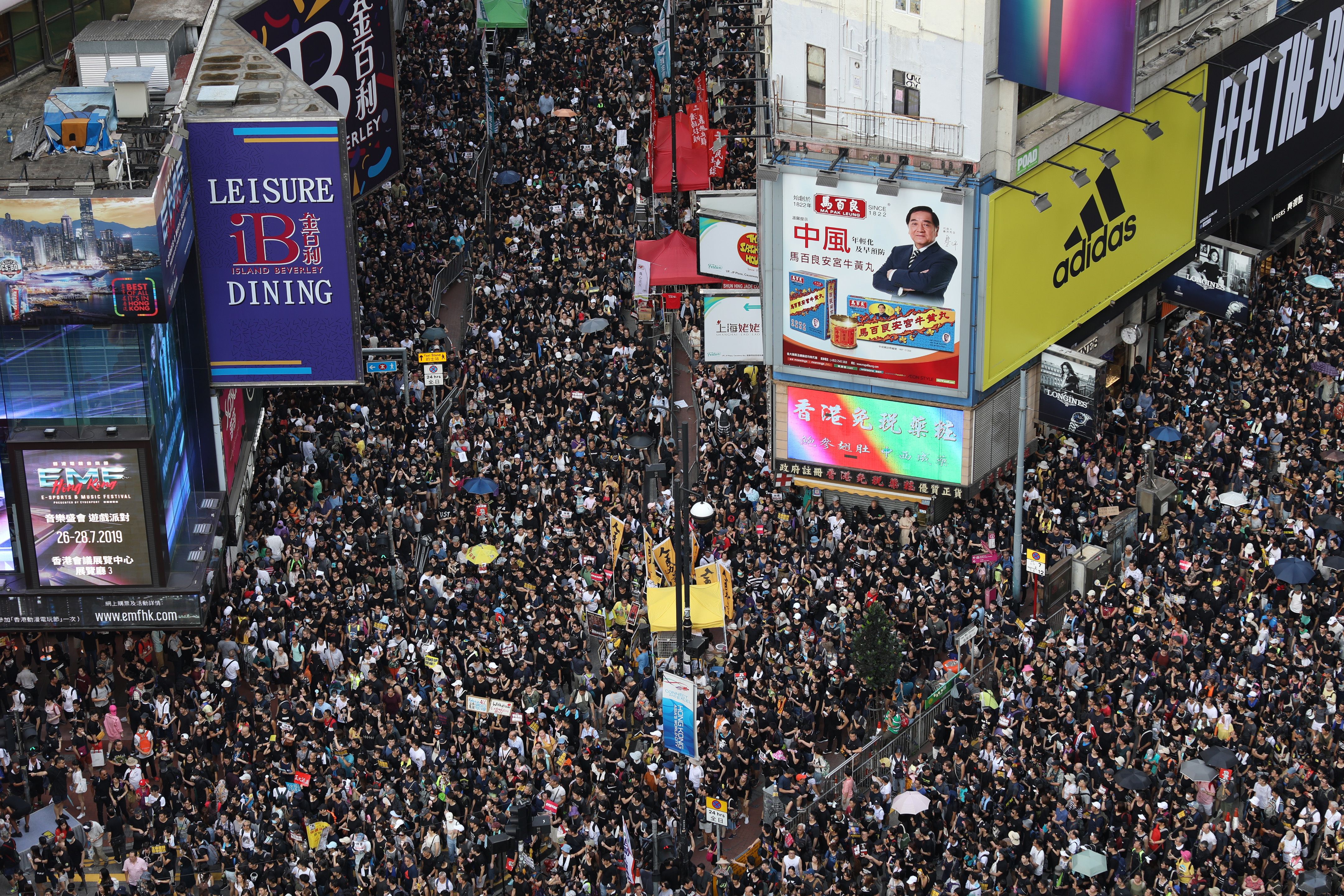 An aerial view of Sunday’s route, which began in Causeway Bay.  JEROME FAVRE/EPA-EFE/Shutterstock

The most recent escalation of violence led the Hong Kong Chamber of Commerce to issue a statement on Monday night joining protesters in calling for the full withdrawal of the extradition bill.

The statement noted that “protests are becoming increasingly confrontational” and “the situation is also raising concerns in Hong Kong and internationally about our commitment to the basic law and the rule of law.”

It further condemned Sunday night’s attack in Yuen Long, stating that the “extremely worrying development of people taking the law into their own hands have shocked and disgusted the people in Hong Kong.” 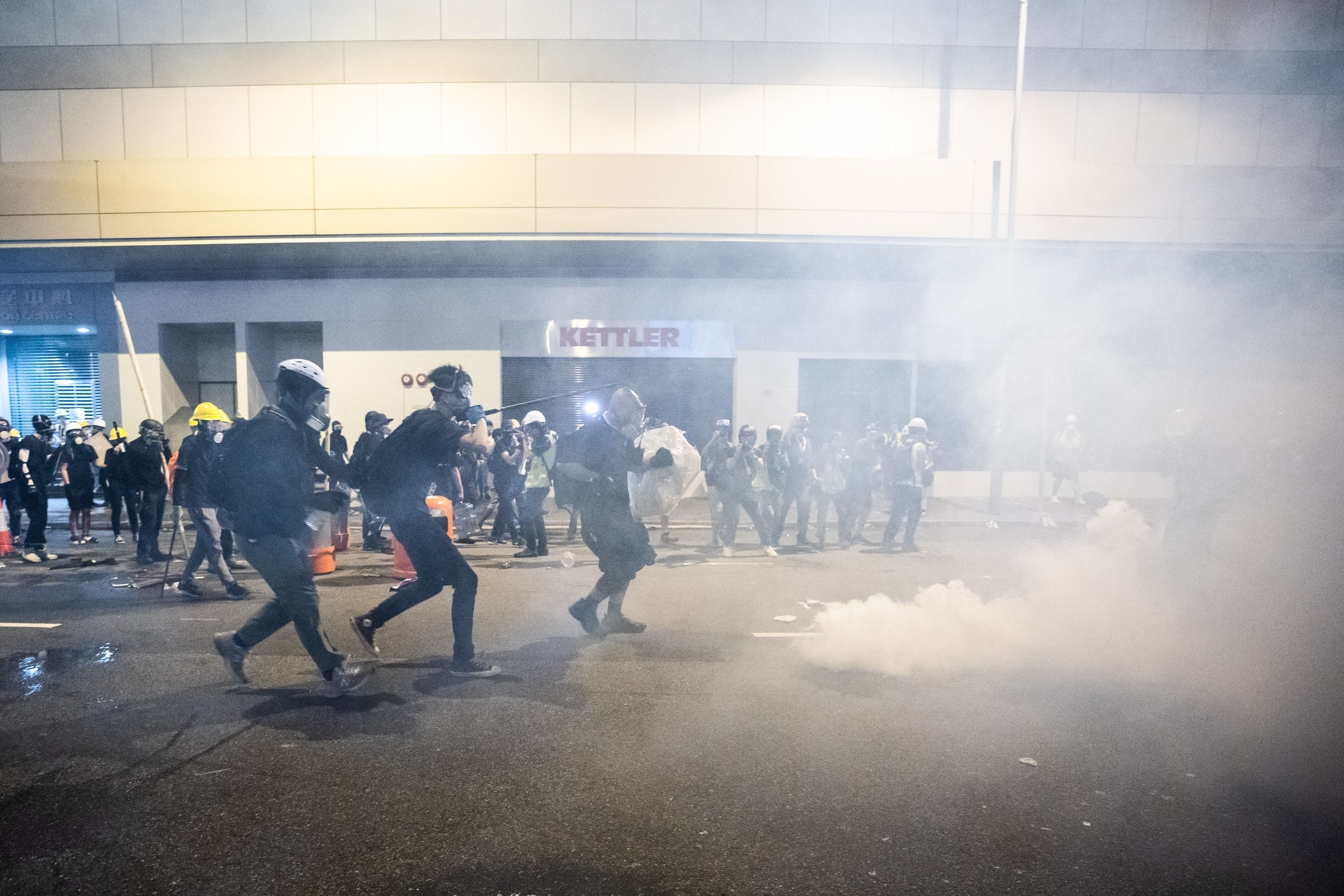 Protesters rush to pick up tear gas canisters and throw them back to the police.  Geovien So/SOPA Images/Shutterstock