Negotiating a free-trade agreement is vital to lift Turkey’s exports to the U.S., which have fallen to about $450 million from $2 billion a decade ago. 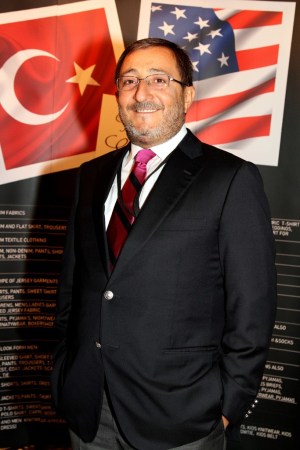 NEW YORK — Negotiating a free-trade agreement with the U.S. is vital to lift Turkey’s exports here, which have fallen to about $450 million from $2 billion a decade ago.

Confident an agreement will come about in the next two years, Hikmet Tanriverdi, chairman of the Istanbul Textile and Apparel Exporter Associations, or ITKIB, led a trade mission to New York last week as part of the plan to boost Turkey’s textile and apparel industry overall and revive business with American retailers and brands. The goal, he said, is to improve sales of Turkish brands abroad and increase sourcing activity for factories in the country.

Last month, U.S. Trade Representative Michael Froman met with Turkish Minister of Economy Zafer Caglayan to launch work under the new U.S.-Turkey High Level Committee, for which the two officials will serve as cochairs. The HLC was unveiled by President Obama in May during the visit of Turkish Prime Minister Recep Tayyip Erdogan as a means to explore how Turkey might be affected by the U.S.-European Union Transatlantic Trade and Investment Partnership negotiations and to assess ways to liberalize U.S.-Turkey trade and investment.

During their meeting, Froman and Caglayan discussed the organization of the HLC and the possible issues both countries could examine in the near term, with a view toward enhancing their trade and investment relationship.

“Bilateral economic relations between Turkey and the United States have to be improved, and we both have this aim,” Erdogan said at a news conference in May with Obama. “Ten years ago, our trade stood at $8 billion; at the moment, trade stands at $20 billion. But this amount is still not sufficient. We have to increase the amount of trade between our two countries.”

Obama said it was important to enhance the trade relationship between the two countries, especially in light of the U.S.-EU trade pact being negotiated.

“If we make an agreement, after two years we’ll be on the way back to $2 billion in exports to the U.S.,” while also serving as an entryway to countries such as Russia and nations in Western Asia, said Tanriverdi, interviewed at Gotham Hall here, where the mission set up for two days. “The textile industry, especially, is eagerly awaiting a free-trade agreement between the two countries. Our industry already has know-how and experience, and once the agreement is done, there is a huge opportunity for companies in the two countries to establish joint ventures and become partners and be very successful, and the trade can increase rapidly.”

U.S. foreign direct investment in Turkey was more than $5 billion in 2011, and Turkish FDI in the U.S. was nearly $1 billion. Figures for 2012 were not available.

Tanriverdi said it has been difficult for Turkish firms to compete because of the U.S. developing free-trade agreements with many countries over the last decade or so; Turkish goods incurring steep tariffs of 17 to 30 percent when entering the U.S., and the increase in sourcing in places such as China, Bangladesh and Vietnam. He noted that Turkey has an export infrastructure in place — the country exported $23.6 billion in textile and apparel last year, representing 15.5 percent of exports earnings, according to ITKIB.

Meanwhile, Turkish companies have been paying higher wages to their workers and establishing higher manufacturing standards as the industry and economy have matured, he noted.

“So there is a big gap between third world countries and Turkey,” he said. “Turkey has also developed its own design sector in the last 10 years and is not just a manufacturing country.”

He noted that in 2007, Turkey established its own fashion school, the Istanbul Moda Academy, to feed the industry with students trained in the field.

Seda Lafçi, director of the academy, explained that the school has established a fashion incubator that supports designers to build a brand. It is located in the heart of the fashion district in Istanbul and supports them in all aspects of running a business, including production facilities and showrooms, and creating a marketing and business plan.

Tanriverdi said the aim of ITKIB is to grow Turkey’s own brands and for it not to be seen as only a factory destination.

“Let’s build up our fashion industry and our own designs, and they can sell it to U.S. retailers for their private labels,” he said.

Julia Hughes, president of the U.S. Association of Importers of Textiles and Apparel, who spoke at the event on Thursday, said, “The trade mission highlighted some of the terrific manufacturers in Turkey. We think that there are many new sourcing opportunities that will support their comeback to the U.S. market.”

Hughes noted that Turkey ranks as only the 27th-largest supplier of apparel to the U.S., but said, “The combination of design and quality manufacturing, along with excellent records on compliance and environmental sustainability, definitely mean that there is a great opportunity for Turkey.”

In addition to the trade mission, Turkish designers already participate in fashion weeks in New York, London and Paris, and the aim is to increase that number and coordinate it in a more cohesive manner. The industry will also be showcased at Istanbul Fashion Week, which kicks off Oct. 7.

Turkey is best known for its knitwear, socks and jeans, as well as home textiles, and many companies from these sectors participate in trade shows in the U.S. and Europe. Plans are to enhance the presence at the events.

Tanriverdi noted that Turkey’s strengths are its access to raw materials such as cotton and its vertical structure that includes manufacturing facilities, fabric and knitting mills, and trimming and dyeing companies. It is not as strong in nondenim wovens and has no synthetic yarn or fiber capabilities.

Turkish ready-to-wear companies now operate some 3,000 stores internationally, compared with just 300 five years ago. By 2023, the goal is to have 20,000. Well-known brands include Mavi Jeans, which is sold at 4,000 stores in 50 countries, including 285 of its own signature stores, and has sales of about $300 million. Colin’s jeans are sold in 670 stores in 32 countries, primarily in Turkey, Russia, Ukraine, Belarus, Kazakhstan and Saudi Arabia. Sportswear firm LTB has stores in Turkey, Germany and Eastern Europe. Men’s wear company Sarar has more than a dozen stores and outlets in the U.S. and Canada, and about 12 other countries around the world.