It was Day One for the U.S. Fashion Industry Association, a creation brought on by a new era for international trade. 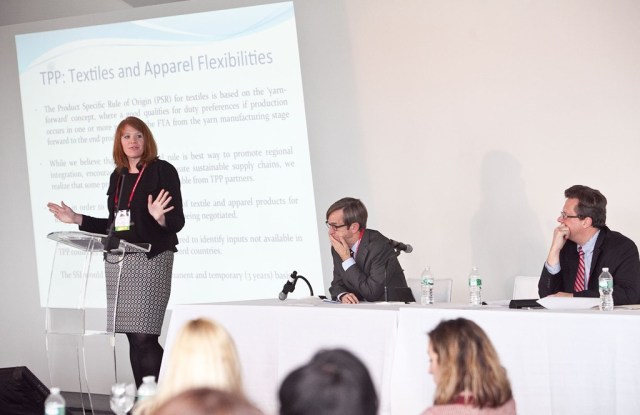 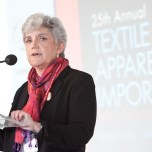 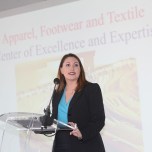 NEW YORK — It was Day One for the U.S. Fashion Industry Association, a creation brought on by a new era for international trade.

The event was the 25th annual trade and transportation conference of the group that had been the U.S. Association of Importers of Textiles & Apparel. It coincided with the organization unveiling a new name, logo and updated mission of expanding its scope beyond goods entering U.S. borders to encompass a more international focus, while also embracing the Made in the USA movement.

Speakers at the conference, held Nov. 6 at the Tribeca Rooftop here, and organized as usual with the American Import Shippers Association, addressed the dynamic changes occurring in global sourcing, from new free-trade agreements being negotiated to new mega container ships that are changing the course of hauling freight and a new Customs program meant to expedite those shipments.

The evolution of ocean carriers and shipping continues with one key theme — “size matters,” said Ken Uriu, marketing manager for trade development at the Port of Long Beach, which combines with the twin Port of Los Angeles for the largest point of entry for textiles and apparel.

“The ships that are involved in Trans-Pacific trade are only getting larger and larger,” Uriu said, noting that last month a 14,000 TEU, or 20-foot equivalent unit, ship came into port.

He noted that such a ship would still be too big to come through the Panama Canal when its expansion is completed in 2015 and is able to handle 13,000 TEU ships compared with 5,000 TEU carriers now. The canal’s $15 billion expansion will lead to more East Coast capacity, greater fuel efficiency, and is bringing about a deepening of Atlantic and Gulf of Mexico harbors to handle the larger vessels.

The Port of Long Beach is investing $4.5 billion in infrastructure to handle the ships. Uriu said its harbor expansion will be able to process three million TEUs annually, while reducing the amount of pollution by half. The twin ports are also improving their on-dock and near-dock rail facilities.

Robin Lanier, executive director of the Waterfront Coalition, said the port will have to deal with a new labor contract that expires on June 30 between the International Longshore and Warehouse Union and the Pacific Maritime Organization. With key issues of health care and jurisdiction of what jobs fall under ILWU control, Lanier predicted the negotiations will be difficult and could include a period of work stoppages and slowdowns that could create uncertainty for importers.

Meanwhile, U.S. Customs and Border Protection’s Center of Excellence and Expertise program is making strides in easing the flow of goods into the country. Dora Murphy, director of the CEE for Apparel, said the fourth-month-old center, based in San Francisco, has already started to substantially change the way goods are being processed. The textile and apparel CEE is the 10th such industry-specific virtual organization strategically placed around the country, intended to provide “one-stop processing” for any importer.

A key change in the way Customs handles imports now is an account-based method instead of a piece-meal approach, she noted. Another is to establish “trusted partners” status for established importers for expedited processing. While the centers are located in specific cities, their processing is virtual and they have offices throughout the country, she added.

Sandra M. Fallgatter, customs & trade compliance director at J.C. Penney Co. Inc., said, “The CEE has been good for us in the four months it has been in operation. By having the CEE focus on industry-specific issues, CBP is able to provide tailored support for companies, quickly resolve inspection issues and focus on high-risk shipments, as well as improve communication and resolution of Customs holds.”

The potential for an increased flow of goods through two major free-trade agreements — the Trans-Pacific Partnership and the Transatlantic Trade and Investment Partnership — were analyzed by experts as problematic but still likely to occur.

Jonathan Fee, a partner at Alston & Bird, noted that the 13-country TPP “represents a pivoting or repositioning of U.S. trade toward Asia” and involves such complex and controversial areas as labor and environmental issues; state-owned enterprises such as exist in Vietnam, Malaysia and Singapore; tariff rates and market access in trade in goods and services, and government procurement.

“We are hurtling toward a yarn-forward standard for apparel,” Fee said of the provision that will qualify textile and apparel trade between the TPP countries only if the content of the yarn or fiber is made in the member countries.

Kim Glas, deputy assistant secretary for textiles, consumer goods and materials at the U.S. Commerce Department, noted that since the last TPP negotiating session in Brunei in August, the U.S. has had a variety of intercessionals with member countries.

“The President has charged us and the TPP ministers have agreed to work as hard as we can to complete the TPP agreement this year,” said Glas, noting the next and potentially final meeting is scheduled for December in Singapore.

After the conference, House Republicans and Democrats sent letters to President Obama questioning his request for trade promotion authority, which limits Congress to an up-or-down vote on trade pacts, potentially putting a wrench in getting TPP over the finish line this year. Julia Hughes, president of the USFIA, said, “Certainly any agreement could be concluded, but it won’t be the same high standard, 21st-century type of agreement if all sides at the table know that Congress could amend the agreement at any point.”

On the issue of “short supply,” where products deemed to not be available in a country are allowed to be provided by third-party nations and still be eligible for duty-free status, Glas said a list of 217 short-supply products has been created that would be on a permanent list, while another group would be put on a temporary three-year list. Fee said he was “disturbed” that TPP will not allow for future designations or decisions on short supply, “but my views will not prevail.”

“The reason we don’t have flexibility is that we don’t know how to construct something that would be fair and useful to all parties,” Glas said. “We did not want to build a short supply list that nobody would use. It’s about trying to strike the right balance for all the countries.”

She said rules of origin and market access are vital to the U.S., which is the world’s fourth-largest exporter of textiles, with $13.5 billion worth of goods shipped in 2012, and is the largest importer of apparel and textiles.

“The U.S. is looking at the TPP negotiations as a region,” Glas said. “We believe the yarn-forward construct will help create new supply chains in the TPP and…ensure that supply chains that are in existence will remain.”

As for the proposed U.S.-European Union free-trade pact, for which discussions have just begun amid a fair amount of acrimony, Robert MacLean, head of the EU international trade and export controls practice for Squire Sanders’ Brussels office, said, “We see it as a stimulus for both economies…that should be an ambitious, comprehensive balanced agreement.”

MacLean said it should include improved market access, create regulatory clarity and have high standards on consumer protection and the environment.

David Spooner, USFIA Washington council, who negotiated a score of trade pacts in the Bush administration, said from his experience, “Setting firm deadlines is key for the negotiators to be able to close the deal.”