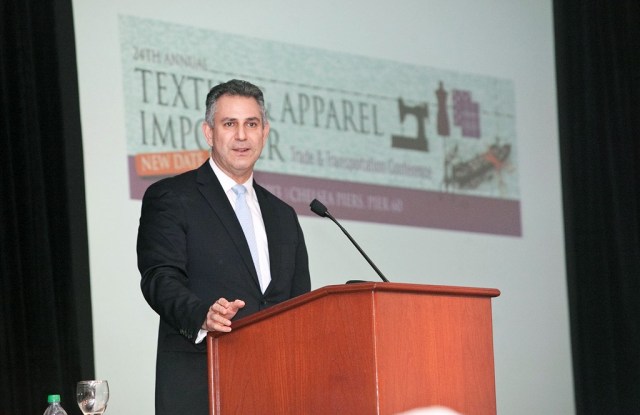 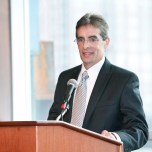 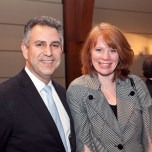 NEW YORK — The message from officials was clear: The federal government has got the fashion industry’s back.

Executives attending the Textile & Apparel Importer Trade & Transportation Conference at the Chelsea Piers also heard about the volatility of cargo shipping — oversupply of ships, roller-coaster freight rates, labor woes at major ports — the down side of existing free-trade agreements and the complexities of negotiating new pacts such as the Trans-Pacific Partnership.

Francisco Sanchez, undersecretary of international trade at the Commerce Department, in a keynote speech and an interview on the sidelines of the conference, said the industry is a priority sector for him.

Appointed in 2010, Sanchez said he’s spent a lot of time learning about the industry — the conference hosted by the U.S. Association of Importers of Textiles & Apparel and the American Import Shippers Association marking his 12th such event.

“I’ve listened and I’ve learned, and I’m firmly committed to expanding sourcing opportunities for Made in USA products, increasing markets for U.S. exports and reducing barriers to trade,” he said. “Not only is there a renewed interest in manufacturing, but there is a renewed interest in the textile and apparel industry.”

Sanchez noted that under President Obama’s National Export Initiative, announced in 2010 with a goal of doubling U.S. exports by 2015, the sector is playing a key role. He said U.S. exports hit a high of $2.1 trillion in 2011, with $22.4 billion from textiles and apparel, a 35 percent rise from when Obama took office in 2009, and for 2012 are on track to surpass the previous year.

“As part of the NEI, when we think about trying to achieve the President’s goal of doubling exports, we view textiles and apparel as an important sector to help us get there — the awareness and attention is at the highest level in many years,” he said. “Specifically, one of the things we’ve done is encouraging supply chain growth in the Western Hemisphere. Textiles and apparel, along with cotton production, supports over 600,000 American jobs.”

Sanchez noted that 66 percent of exports were shipped to Western Hemisphere countries in 2011. Exports to Central American Free Trade Agreement countries increased 25 percent in 2011 from 2010. In the first 10 months of 2012, $2.8 billion in textiles and apparel shipped to the region.

He said there are three main actions the industry can take to help Made in America products and exports grow. “The first is to be engaged with us, and they’re doing that, but I would say keep it up,” he said. The second is to “continue to invest in research and development,” upgrading plants and equipment and product innovation. The third is for “the sourcing community to continue to look at the Western Hemisphere as they make their choices of where things are going to be sourced.”

Building on Commerce’s export.gov Web site, an enhanced “Made in USA” site will be launched in the next couple of months that will include a searchable registry of American producers to connect them to potential customers abroad.

As for TPP, Sanchez said the administration is committed to completing negotiations by the end of the year. The U.S. already ships $13.8 billion in textiles to TPP countries, while Vietnam exports $13.2 billion in apparel.

Addressing one of the consistent complaints of importers, that customs regulations and processes are overly burdensome, Al Gina, assistant commissioner of U.S. Customs & Border Protection, said help is on the way. One of the key aspects of this improvement will be the planned opening in April of the Apparel, Footwear and Textiles Center for Excellence and Expertise in San Francisco. The 11th industry-specific CEE to open since 2011, Gina said it will eliminate a regional and often repetitive customs approach for documentation and servicing the industry, which he said represents $131 billion in import value and $14 billion in duties collected annually.

With a goal this year of “trade transformation” at CBP, he said there is a “sense of urgency” for changing the way the agency addresses trade. Gina said, “We really need to focus on our enabling part of the equation between regulations — we don’t want to regulate anybody out of business — and CBP’s contribution to ensuring that the community at large is flourishing, that people want to come and conduct business in the U.S., that people want to establish manufacturing in the U.S.”

Meanwhile, it’s been choppy seas for the ocean freight operators that ship the imports and exports.

Gene Seroka, president for the Americas at American President Lines, said, “Container trade continues to move along sluggishly. [There’s been] five straight months of double-digit declination with respect to Asia-Europe trade. Transatlantic trade has also seen declines. Some bright spots have been Latin America and trade within Asia has been going up.”

Seroka said the shipping industry has been unprofitable for many major carriers, with new-build orders generally down, although new, larger vessels are being built.

“But there is a dilemma — 60 percent of imports are coming from China, but exports are moving to Southeast Asia, the Asian Subcontinent and the Middle East,” he said. “How to get those containers back to the point of origin has been a topic of consideration for some time.”

Seroka noted that the shipping industry and port operators are dealing with the issue of larger ships now able to come through the reengineered Panama Canal. He said APL has instituted a $500 million Efficiency Leadership Program to achieve goals such as reducing its carbon footprint and becoming more fuel efficient.