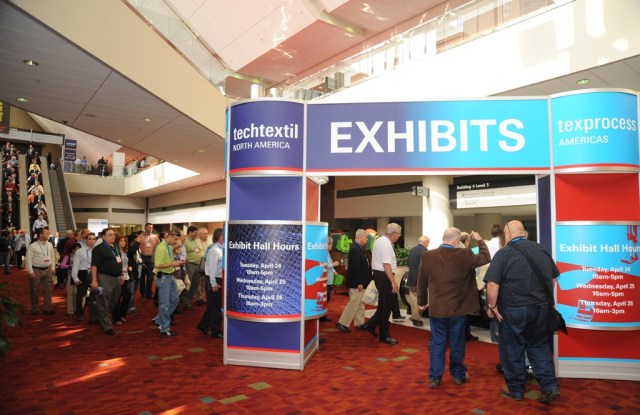 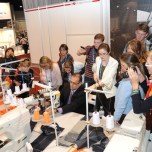 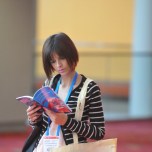 ATLANTA — The timing is now for the U.S. garment industry to take advantage of opportunities in trade shifts and changes.

Executives at the Texprocess symposium, part of the Techtextil North America and Texprocess Americas combined shows, said the most important reasons for the shift are increasing labor costs in China, which is helping to chip away at the country’s market share, and the trend toward fast fashion.

David Roberts, chief operating officer of exhibitor Tuscarora Yarns, said, “There’s clearly a lot of interest in sourcing closer to home these days. People are looking for resources to build their supply chain in the region so they can move a portion of it here for replenishment and close to market and away from other parts of the world.”

Summing up the feel of the show, held here for three days ended April 26 at the Georgia World Congress Center here, Sarah Friedman, executive director of SEAMS, “Everybody is energized. We’re seeing companies coming through who want to [source] in the U.S.”

The twin shows featured 479 exhibitors selling machinery, supply chain solutions, fabrics and other products, and by the bustling atmosphere, companies are gearing up for new sourcing opportunities.

Streader noted the opportunities for U.S. apparel exports to the rest of the world, particularly the European Union, especially as China’s market share decreases. China had a 52 percent share of EU imports by volume in 2011, but Streader predicted that will drop seven to eight points over the next three years. Only about one percent presently comes from the Americas region.

Of that one percent, the U.S. is first, followed by Peru because it produces a higher quality product, such as alpaca, said Mary O’Rourke, president of O’Rourke Partners. Existing U.S. brands with a business in the EU represent the greatest near-term opportunity for suppliers, she noted.

“They want freshness faster,” he said. “They want change, newness, evolution, and they love American brands.”

O’Rourke also advised that the EU has more stringent performance requirements, such as testing and accountability, than in the U.S., and EU brand owners have a more direct involvement with their factory partners. She also noted a potential advantage for the Americas: the lead times to Europe are somewhat shorter than from Asia.

Sustainability, as well as social and regulatory compliance, is another strength for the Americas region over Asia, said O’Rourke.

“This is the most environmentally friendly industry, and the Asian mills can’t hold a candle to them,” she said. “It’s one of the reasons brand owners are reevaluating this hemisphere. They don’t want to do business with companies that aren’t environmentally safe.”

However, she added, “China is seeing more accountability for sustainability and there will be more in the future. That will raise prices. China wants to move forward as its economy develops, and is reducing power and water consumption and dealing with water emissions.”

Chinese firms are also looking at running their mills more efficiently because of rising labor and shipping costs and increasing regulations, she said.

The biggest challenge in Central America is the fabric, said Mike Todaro, managing director of the American Apparel Producers Network. This is especially true for better woven fabrics, O’Rourke added.

“We have denim capacity and cotton stretch but not for better markets in this hemisphere. Piece goods availability is a big issue.…But we’re starting to see more textile investment in Latin America.”

While most women’s apparel is made in Asia, some is made in Colombia and Peru, which are “becoming increasingly important as better brands explore possibilities in that region,” O’Rourke said.

New trade agreements and favorable trade legislation, including the Generalized System of Preferences, are helping, too. The U.S. implemented its free-trade agreement with South Korea in March, one with Colombia is targeted to go into effect on May 15, and one with Panama is expected in October.

Among the exhibitors, a few of the technical fabrics featured as new products had women’s wear potential, including EcoPure, a synthetic leather for apparel and accessories that uses water instead of harmful solvents, and HeiQ’s Adaptive, which offers thermoregulating and moisture management.

Machinery and sourcing solutions companies also offered new products. TC2 promoted its new KX-16 3-D body scanner, which it says is better and less expensive than its predecessor. Human Solutions Group presented its new Vidya 3-D simulation and the Virtual Mirror, which shows how a garment fits on a person.

Gerber Technology showed a slew of new products on iPad-based monitors set up in the four corners of its booth. The products included two new cutters, the ZipJet part identification system, the Gerberplotter XLp and the ContourVision automated scan-to-cut system.