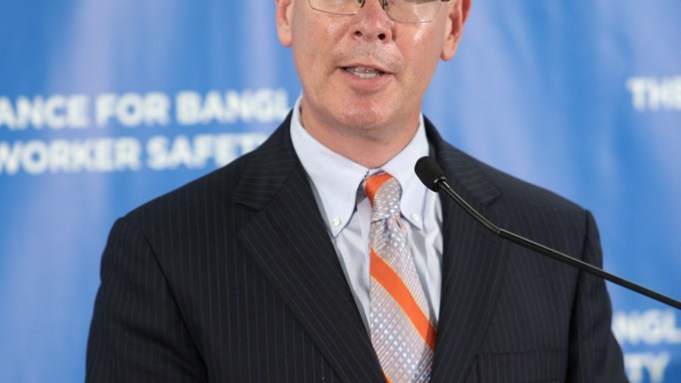 WASHINGTON — A group of 17 North American retailers and brands, including Wal-Mart Stores Inc., Gap Inc., VF Corp. and Target Corp., unveiled a binding five-year worker, fire and factory safety pact here on Wednesday that will provide a minimum of $42 million in funds to improve factory safety conditions in Bangladesh and train workers and factory owners in the wake of garment factory tragedies that have claimed the lives of more than 1,200 workers.

The companies taking part in the new Alliance for Bangladesh Worker Safety said their initiative will cover 500 factories in Bangladesh and aims to complement an existing legally binding building and fire safety accord signed by more than 70 mainly European brands and retailers.

The new plan, called “The Bangladesh Worker Safety Initiative,” will also provide more than $100 million in loans and access to capital to assist factory owners in making safety improvements. It calls for inspections of 100 percent of the alliance members’ factories in Bangladesh within the first year, the development of common safety standards within three months, public sharing of all inspections and democratically elected worker participation committees at every factory.

In addition, the alliance will release a semiannual progress report and attempt to forge a stronger partnership with the Bangladeshi government.

A coalition of labor groups including The Worker Rights Consortium, International Labor Rights Forum and the Clean Clothes Campaign immediately blasted the alliance’s new initiative, calling it a “corporate-run factory auditing scheme, another in the long series of ineffective corporate auditing programs that these companies have touted for years.” United Students Against Sweatshops also staged a protest outside of the Bipartisan Policy Center, which helped facilitate discussions among the broad range of brands, retailers, industry groups and other stakeholders.

Criticism has been mounting against the North American retailers and brands for declining to sign an accord led by IndustriALL Global Union and signed by more than 70 primarily European brands and retailers, opting instead to develop their own plan.

“We are deeply disappointed that Wal-Mart, Gap, Target, Macy’s, The Children’s Place and the other major American retailers have rejected that call [to sign the IndustriAll-led accord] and, instead, have announced a competing program that borrows the rhetoric of the Accord but not its critical elements,” said Reps. George Miller (D., Calif.) and Sander Levin (D., Mich.), who have been the most engaged on the safety issues. “The Accord, among other things, obligates its members to make the necessary funds available to fix unsafe factories. The Wal-Mart-Gap-led plan, called the Alliance, does not.”

“Notwithstanding that three-fifths of the garment factories are vulnerable to collapse, according to Bangladeshi engineers, the single effort undertaken by the Alliance to help with remediation is a strictly optional program to make “affordable capital” available to factories. Indeed, the primary purpose of the Alliance appears to be to limit the retailers’ liability — and therefore their responsibility — in ways that the Accord would not,” Levin and Miller said.

But the North American executives defended their plan on Wednesday at a press conference at the BPC here.

“This five-year, binding agreement is designed to significantly elevate fire and building safety in the Bangladesh garment factories used by alliance members through comprehensive and measurable action,” said Daniel Duty, vice president of global affairs at Target. “As we do in our respective businesses, we collaborated to make this results-oriented action plan built upon principles of commitment, collaboration and accountability.”

“The foundation of this initiative is our commitment to the Bangladeshi workers — the safety of the workers at our factories is paramount,” Nelson said. “Over the past 49 days, we have diligently worked together to create a plan that will dramatically improve safety conditions in the factories that we work with. Our implementation plan is aggressive. To ensure our initiative is a success, we not only commit manpower necessary, but also the finances needed to funds this initiative.”

Within the next four weeks, the alliance will work to establish buyer and safety protocols, a standard training program and develop common safety standard recommendations, Nelson said. The group also plans to implement an anonymous worker hotline, using mobile technology to be administered by a third party, he added.

Company executives stressed the similarities between the two Bangladesh safety plans and pledged to work on a parallel track with the other accord, though there are key differences between the two.

Bobbi Silten, senior vice president of global responsibility at Gap, said the alliance’s plan and the accord have a “shared purpose, and that purpose is to improve worker safety in garment factories in Bangladesh.”

“The alliance’s fundamental belief is that in order to truly improve safety in Bangladesh, we need shared responsibility and more than one actor involved in the solution,” Stilton said.

Jay Jorgensen, senior vice president and global chief compliance officer at Wal-Mart, said, “There are now two strong plans that have been created to improve working conditions in Bangladesh — the Bangladesh Worker Safety Initiative that we announced today and the plan created by stakeholders in the EU. With these two plans created, the next step is to work together, to collaborate with the government, to collaborate with retailers around the world, with factory owners, NGOs and…more importantly, with workers themselves to increase safety and to improve the quality of life for women and men who make the products we sell.”

Jorgensen noted that the main difference and primary reason North American retailers declined to sign the other accord was concern over legal liability. However, four North American companies signed the European accord, including PVH Corp., Abercrombie & Fitch Co., Sean John and Loblaw Cos.

“The [IndustriALL] accord has some provisions, in the way the U.S. and Canadian legal system works, that would subject us to potentially unlimited legal liability and litigation,” Jorgensen said.

The Worker Rights Consortium and International Labor Rights Forum, which back the IndustriALL-led accord, argued after the alliance’s press conference that the group’s plan is “unenforceable by workers.”

“The way in which a worker may enforce the obligations is to report any breach to the companies, and then the companies will take necessary action. This puts all the power in the hands of the corporations, unlike in the [IndustriALL] accord, where worker representative organizations may take enforcement action,” the two groups said, adding that companies can walk away from the alliance, but not from the accord, which they said is a legally enforceable contract that utilizes binding arbitration where warranted to resolve disputes.

Nelson of VF said the worker participation committees, which will be formed by elected workers in the factory, will give “workers the voice [where] they can be heard.”