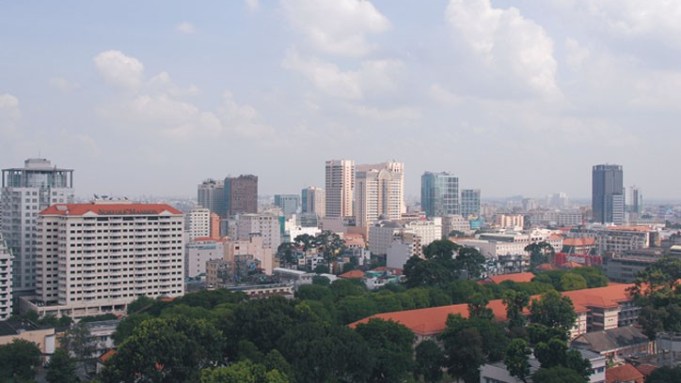 HO CHI MINH CITY, Vietnam — While much of the developed world wrangles with recession, Vietnam’s economy is moving along at a healthy pace.

From the cranes and construction sites dotting the skyline of this southern city to the rapid rise of its manufacturing industry, Vietnam has become one of Asia’s most dynamic countries. But the country isn’t immune to the global economic slowdown.

Garment and textile industry trade organization Vinatex has revised its export estimates for 2008 down to about $9.1 billion from $9.5 billion. While that figure still reflects nearly 17 percent growth from 2007, it does show a slowdown from the 20.5 percent growth clocked in the first six months of the year — and the outlook for 2009 is even more dour.

Late last month, the State Bank of Vietnam devalued its currency, the dong, by 3 percent, its second devaluation of 2008, to spur exports and boost an economy facing its slowest annual growth in nine years. The government recently instituted a $1 billion economic stimulus package in response to the global financial crisis.

“In the long term, Vietnam’s textile and garment industry has great potential as it has demonstrated in recent years,” said Thi Huong Giang Trieu, deputy general director of ZEN Plaza, a store in Ho Chi Minh City that promotes the work of young designers. “However, in 2009, it will not be able to avoid some difficulties. It’s estimated that the export turnover in 2009 will decrease by more than 20 percent. If this happens, many workers will be out of jobs and there will be decreasing investment in the development of [Vietnamese] fashion products.”

Still, Vietnam might be one of the better-placed countries to ride out a global recession thanks to its young, educated and motivated workforce, low labor costs and high levels of foreign investment. The median age of Vietnam’s population of 86.12 million people is 26.9 years and gross domestic product growth has averaged 6.8 percent a year from 1997 to 2004, overlapping with the onset of the Asian economic crisis, according to the CIA World Factbook. Vietnam’s export-driven economy rose 6.2 percent last year, slowing from 8.5 percent in 2007.

“Vietnamese workers can be trained very easily and learn how to operate new technology in a very short time,” said Le Quoc An, chairman of several industry groups, including Vinatex and the Vietnam Textile & Apparel Association. “Labor costs in China are currently slightly higher than in Vietnam, whose labor costs are marginally higher than in Indonesia. Overall, I believe that Vietnam’s labor force is very competitive.”

Still, he noted there are limits to how fully Vietnam can compete with a much larger and mightier China, even though statistics on imports to the U.S. show Vietnam gaining market share over its behemoth neighbor.

Apparel and textile imports from China to the U.S. for the 10-month period ended Oct. 31 fell 2.5 percent to 17.7 billion square meter equivalents, while Vietnam’s imports of the same products to the U.S. increased 21.6 percent to 1.5 billion SME. Women’s knit shirts and blouses, women’s pants and cotton underwear were the fastest-growing categories in the period.

“While labor costs and the quality of human resources in Vietnam and China are about the same, the fabric and accessory supply to China’s garment industry is massive and much stronger than in Vietnam,” An said. “Their own manufacturers can supply about 90 percent of the fabric and accessories and they only have to import fashion accessories. We have to import 70 percent of woven fabric…so Vietnam’s textile industry is still relatively weak.”

The raw materials issue also affects the footwear industry here. Duc Thuan Nguyen, chairman of the Vietnam Leather & Footwear Association, explained his company, TBS Shoes, has to import about 60 percent of its materials.

“It is often very difficult,” Nguyen said. “We have to face delays in deliveries and transportation costs are going up because of the increase in fuel prices. However, there is an overall improvement. Five years ago we were producing only 20 percent of our materials, but now it is up to 40 percent. Some 35 percent to 40 percent of the needed imported materials come from China.”

The Vietnamese government has taken steps to support the growth of the domestic industry. It allows duty free import of materials, as long as they are reexported as finished products within 90 to 120 days after entering the country.

Nothing better illustrates the changes sweeping through Vietnam’s manufacturing industry than the story of TBS Shoes, the largest footwear company in the country not backed by foreign investment.

The footwear industry is one of the fastest growing in Vietnam. In 2007, the country produced over 500 million pairs of shoes, mostly sneakers, worth $4.5 billion. Formerly a state-owned footwear company, TBS Shoes it is now a joint stock business — privately owned by about 500 retired army officers — successfully producing shoes for the foreign market and foreign companies in the U.S. and U.K., such as Reebok and DC. Although the biggest shoe factory in Vietnam belongs to Nike, most Vietnamese factories, including TBS Shoes, are built and equipped using local funds and local investment.

“There is not one state-owned shoe company left in Vietnam,” said Nguyen. “All companies are privately owned and all are export-oriented, and that’s evidence of our success. However, it’s also our major problem — Vietnam doesn’t have its own brand. The 500 million shoes made here are sent abroad. Shoes sold in Vietnamese stores are either imported, mainly from China, or are illegally copied [fakes].”

Scarcity of local brands is one of the main problems facing the footwear and garment industries in Vietnam. The country lacks a confident group of educated and experienced designers, the requisite backbone for any potential local industry. Decades of wars and hardship interrupted the long tradition of Vietnamese design and it has only started to change recently.

One example of this is Minhhanh, a brand that combines traditional Vietnamese design motifs and international fashion trends and has stores across the country. ZEN Plaza is the only major store in Vietnam that intensively promotes the work of local designers — presently 20 of them have stalls on two lower floors. ZEN, backed by Japan’s Yazuya Co., is also a workshop, “laboratory” and “thermometer” for Vietnamese up-and-coming designers like Truong Anh Vu and Dieu Anh.

“The main reason why Vietnamese textile companies cannot supply garments to the domestic market is because we don’t have enough designers. It is forbidden for local textile companies to copy designs of the garments they produce for export,” said Trieu of ZEN Plaza. “In Vietnam, we only have 20 top designers. Most of them never graduated from professional schools. They simply have talent, they win prizes and then they join big textile companies, which provide training or support their education. The demand for designers is great, but the supply is tiny.”

Shiro Fukukawa, general director of ZEN Plaza, is trying to place Ho Chi Minh City back on the international map of the apparel industry and design. The store sponsors two fashion shows a year. Fukukawa said he dreams of opening the city’s first fashion school.

“After 1945, [Ho Chi Minh City] was the biggest and the most developed city in Asia. Now its time is returning,” Fukukawa said. “A retail business like ours is very new, we are one of only four department stores in the entire city. But I want us to be much more than just a retail store.”

Despite its many remaining problems, Vietnam is leaving many Southeast Asian nations behind. The business climate, in the past one of the toughest in the region, is improving and attracting an increasing number of foreign investors. The combination of responsible central planning and a liberalized economy is beginning to pay dividends. The economic boom has been followed by a dramatic growth in the quality of life.

“We are still experiencing a bit of a culture shock,” said Celia, a senior manager at a large international development company operating in Vietnam, who preferred to be identified only by her first name. “In our line of business, we have to deal with the authorities and officials. We do see corruption at work. We often feel frustrated because things can’t always be done quickly.”

She cited problems like the country’s rampant inflation. While official figures speak of 19 percent inflation, anecdotal evidence suggests it could be even higher. Despite these challenges, foreign business people are quick to cite the great progress Vietnam has registered over the last few years. Hundreds of companies from all over the world now do business in the country. Regulations are being eased and investors are now allowed to buy condominiums in the major cities. Visa regulations are being relaxed and the red tape appears to be getting thinner.

“In order to compete with China, we have to do better,” An said.

Vietnam clearly has plenty of growing room and the general consensus is the country can and will do much better in the near future. Local officials and business people, foreign expatriates and investors all seem to share one single belief: that after its arduous past, Vietnam is finally taking off economically, loaded with zeal and enthusiasm, as well as tens of millions of young and hard-working people.