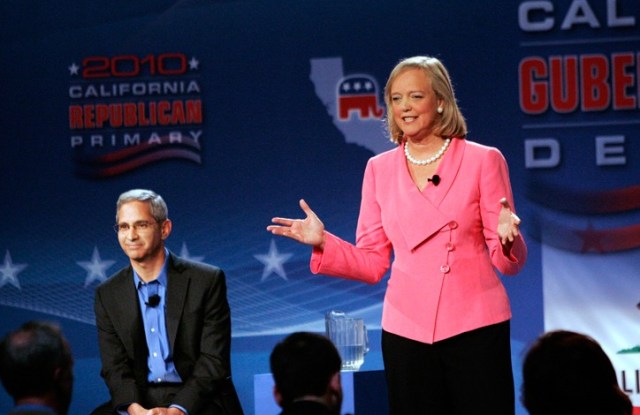 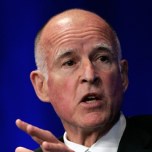 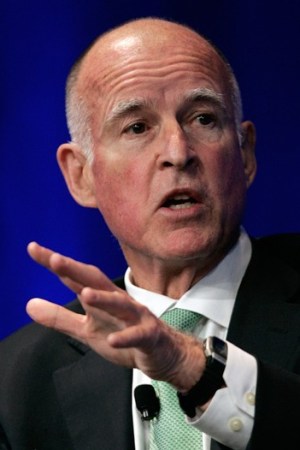 Political newcomer Meg Whitman is trying to parlay her record at eBay into California’s Republican gubernatorial nomination, insisting she can bring savvy chief executive officer-style leadership to a state rocked by economic hardship.

But in the days before Tuesday’s GOP primary, her opponent, Steve Poizner, has made illegal immigration his touchstone. Each candidate is jockeying to convince voters they are best equipped to protect the state’s border, a fiercely debated issue as Arizona prepares to enact a law next month allowing police to check the immigration status of people they suspect of being in the country illegally.

Whitman, a 53-year-old billionaire who helped build eBay’s online marketplace into a business that generated almost $8 billion in sales when she retired in 2008, is in a tightening contest with Poizner, the state insurance commissioner, who sold his Silicon Valley technology company to Qualcomm for $1 billion in 2000.

Whitman began her career at Procter & Gamble and moved on to executive positions at Walt Disney Co., Stride Rite, FTD.com and Hasbro Inc. before joining start-up eBay as president and ceo in 1997. Whitman is promoting herself as the state’s “chief sales officer” and her stated goal is to create two million jobs — including 375,000 in the retail sector — by 2015.

“She points to eBay that she’s an effective businessperson.…That’s her record, that’s what she has to sell and it’s not a record of someone in political office,” said Sherry Bebitch Jeffe, senior fellow at the University of Southern California School of Politics, Planning and Development.

Whitman has proposed eliminating the tax that factories pay for buying manufacturing equipment, as well as the state levy on capital gains. She also wants to impose a state budget spending limit — California has an estimated $19 billion deficit this year and budget gaps are likely for years — based on the state’s gross domestic product so that spending won’t increase unless the state’s economy is growing with it.

Poizner, 53, wants a 10 percent cut in personal income taxes, corporate taxes and the state sales tax. He also is calling for a 10 percent reduction in state spending and a 50 percent cut in the capital gains tax rate. He has run ads criticizing Whitman on a range of issues, from her opposition to the Arizona law to her membership on the Goldman Sachs board in 2001-02.

Whitman’s lead, which was once 50 percentage points according to polls, has narrowed to as few as nine points in some surveys.

Vying to succeed Republican Arnold Schwarzenegger, who rode a wave of voter discontent into office, both candidates have already spent record amounts in the primary race. Whitman is reported to have shelled out at least $80 million, including $68 million of her $1.3 billion personal fortune and Poizner is said to have spent about $25 million.

California, a national economic bellwether, has endured devastating fallout from the recession, including a 12.6 percent unemployment rate in April compared with a national rate of 9.7 percent in May, state government that has flirted with bankruptcy and the implosion of the housing market. Major California-based chains such as Mervyns and Gottschalks have closed, along with manufacturers and specialty stores.

Overall tax revenue decreased 15 percent in 2009 from a year ago amid declines in the general sales tax and taxes for individual and corporate incomes, according to the Tax Foundation, a nonpartisan monitoring group in Washington.

The UCLA Anderson Forecast said the outlook this year is for little or no growth in California, with the economy picking up speed slightly by the beginning of 2011. Although the state’s economy will grow, it won’t generate enough jobs to push the unemployment rate below 10 percent until 2012, the report said.

“There’s really no room in the budget to stimulate job growth,” said Jon Haveman, founding principal of Beacon Economics, a San Rafael, Calif.-based economics analysis and forecasting firm. “It’s the role of the federal government to create stimulus. The state government has to balance the budget and the budget is a disaster.”

Economists said California’s recovery will get a boost because of growing demand from outside the state for manufactured and agricultural goods, higher U.S. consumption, increased public works construction and bigger investments in business equipment and software.

The Kyser Center for Economic Research at the Los Angeles County Economic Development Corp. said California exported $12.4 billion worth of merchandise in March, a rise of more than 25 percent from a year ago. It was the fifth consecutive month with a year-over-year increase. The top California export markets were Mexico, China, Canada, Japan and South Korea.

The Kyser Center also detected positive trends at Southern California’s ports. The total number of containers handled in April at the ports of Los Angeles and Long Beach rose more than 14 percent to 1.1 million 20-foot containers. This was the fifth consecutive month of year-over-year increases.

Haveman estimated the state’s exports will increase 5 to 6 percent in the next year.

California is still struggling to recover from the housing and mortgage crisis. According to MDA DataQuick, a realty tracking firm in San Diego, the median price paid for a home was $255,000 in March. The year-over-year increase was the fifth in a row, after 27 months of year-over-year declines. The median price peaked at $484,000 in 2007 and hit a postboom low of $221,000 in April 2009, the firm reported.

The latest Los Angeles Times-USC survey showed Whitman ahead of Poizner 53 percent to 29 percent, and 55 percent of the voters said Whitman would be better at creating jobs and fixing the economy compared with Poizner’s 16 percent. Fifty-three percent said she would be better suited to rein in government spending versus 16 percent for Poizner and 48 percent favored her to limit tax increases to 20 for her opponent.

Another survey, released May 19 by the Public Policy Institute of California, an independent nonprofit research firm, had Whitman ahead of Poizner by 9 percentage points, compared with a 50-point lead two months earlier.

According to the policy institute and Los Angeles Times-USC surveys, Whitman trailed Brown by 5 and 6 points, respectively.

On the hot-button immigration issue, both candidates support using the California national guard to patrol the border with Mexico.

Whitman favors increasing the number of visas awarded each year to highly skilled foreign workers and opposes amnesty for illegal immigrants. She supports raids on businesses suspected of employing undocumented workers with a three-strikes-and-you’re-out penalty to revoke business licenses for companies caught violating immigration laws three times. She opposes allowing undocumented immigrants to be admitted to state-funded universities and colleges.

Poizner supports the Arizona law, wants to cut taxpayer-funded benefits to illegal immigrants, end in-state tuition for them at state public colleges and universities and revoke the business licenses of companies that knowingly hire illegal immigrants.

Should the Republican candidate defeat Brown in November, they will face the challenge of working with Democrats who control the state legislature and have a different agenda.

“That would make it difficult for any Republican governor,” said USC’s Bebitch Jeffe, who added that Brown wouldn’t necessarily “have a total honeymoon, either.”