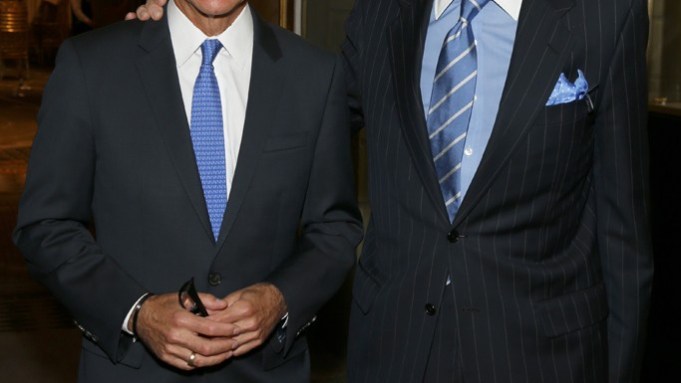 “I have made it my mission to find drugs for the prevention and cure of Alzheimer’s disease within the next 10 years,” declared Leonard A. Lauder, executive chair of the Alzheimer’s Drug Discovery Foundation, or ADDF, and chairman emeritus of the Estée Lauder Cos. Inc., at the organization’s fourth-annual fall luncheon and symposium, held on Tuesday at The Pierre hotel. “This is a disease we have to cure,” he said to the roomful of guests, “and we will, thanks to your help.”

The ADDF, Lauder points out, is “a pure play — every dollar goes to drug discovery and research.”

Bonnie Pfeifer Evans and Alice Shure, trustees of the Charles Evans Award, presented the award to Liz and Randal Sander, both of whom had parents with the disease. The award honors individuals whose contributions significantly advance the field of Alzheimer’s drug discovery and awareness.

After accepting the award, the Sanders — already large donors — revealed that they would donate an additional $1 million, as a challenge grant, to the ADDF.

“There is nothing Liz and I can do to cure the disease in our own mothers — but we want to keep other mothers in the future from getting this disease,” said Randal Sander.

During the lunch, Paula Zahn interviewed Jeffrey L. Cummings, M.D., Sc.D., whose many titles include being director of the Cleveland Clinic Lou Ruvo Center for Brain Health and Howard Fillit, M.D., executive director and chief science officer of the ADDF, about the challenges and risks associated with discovering effective drugs, and the hope of bringing the best of them to market as quickly as possible. While most of the discussion was quite serious, the audience grew animated when Cummings reminded them that certain medicines developed for one purpose unexpectedly had benefits in other areas — “like Viagra,” he said.