The actress has just signed on as the face of Very Irresistible Givenchy, replacing Liv Tyler in the role.

By Julie Naughton on May 1, 2013
View Slideshow 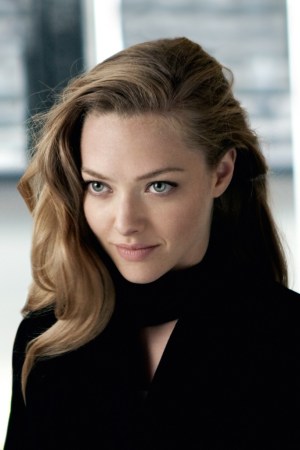 Amanda Seyfried is on the road. Quite literally. Interstate 40, to be exact.

The actress has just left Gallup, N.M., in her rearview mirror as she heads to Santa Fe to film her newest project, a comedy with Seth MacFarlane dubbed “A Million Ways to Die in the West,” which MacFarlane also wrote and is directing. Seyfried’s best friend Alex and her beloved Australian shepherd Finn (the reason they’re driving; the dog can’t fly) are along for the ride as the actress conducts a phone interview with WWD. “It’s eight hours in a car,” she said with a laugh. “It seems like a perfect time to do an interview. To do every interview I’ll ever have.”

The roughly 900-mile journey from Los Angeles doesn’t faze her, although the abundance of firearms along the way might. “They sell guns everywhere in this part of the country,” she said. “The guy at the gas station was raving about his Magnum, whatever that is.”

But, as Seyfried says, “I like to be in the driver’s seat.”

And that she is. Seyfried has just signed on as the face of Very Irresistible Givenchy, replacing Liv Tyler in the role. She is also the face of Clé de Peau Beauté. Seyfried is a longtime fan of the fashion house, wearing a purple spaghetti-strapped dress to the 2012 Tony Awards and attending the house’s fall ready-to-wear show in March. Her response when they offered her the deal? “F–k yeah,” she said bluntly. “It’s an honest collaboration. I’m proud to be a part of [the brands I’m involved with] because what they do is really cool, especially Givenchy — they’re so artistic. And I feel like I have a foot in the fashion industry now.”

She has just finished shooting the ad campaign — which includes both print and TV. TV was shot by Cédric Klapisch, and print by Glen Luchford; the campaign was styled by Riccardo Tisci. Print will begin running in October fashion, beauty and lifestyle magazines in the U.S.; the TV will bow at launch. Thierry Maman, global president of Parfums Givenchy, noted that the actress’ “style and elegance” and high profile made her a natural pick for the youthful Very Irresistible Givenchy. Nicholas Munafo, U.S. president for LVMH Fragrance Brands, concurs. “Amanda is a chic, sexy woman who is a perfect fit for Givenchy.”

But don’t look for an Amanda Seyfried celebrity fragrance anytime soon. “They’re hard work, and the more you do, they take away from your work as an actor. I’m doing these two campaigns because I care about them and the people involved. They’re great things to be attached to.”

The Santa Fe project will take about six weeks to film, and Seyfried is relishing a rare chance to polish her comedy chops. “I haven’t been in a comedy since ‘Mean Girls’,” she said. And while IMDB may claim that she’s got four more in the works, the actress cautions against believing everything on the Internet. “Half those things I’m not even attached to,” she said. “When I’m done with this one, I’ll start filming another one in August in God knows where — probably Georgia, but possibly Fort Lauderdale. It’s funny how things just percolate and then either go away or are made. With independent movies, it’s about a 50-50 chance, and the independent films are the ones I find most interesting right now.”

While Seyfried has no desire to write or direct, she would love to produce movies; she already has one producing credit, on “Lovelace.” “It’s great to get your ideas heard and to have creative input, to be part of the process,” she said. “At some point, I’d love to produce things that I don’t necessarily have to be acting in.”