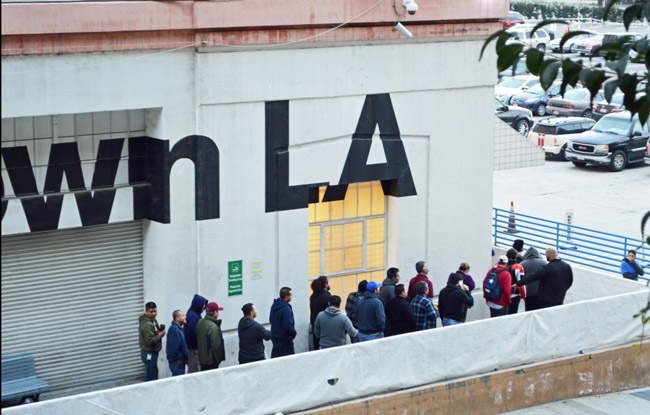 American Apparel layoffs came in waves Monday, with about 2,400 cuts made to the company’s workforce.

The status of about another 1,000 jobs are still being determined, a spokeswoman said, as the company works through a deal struck with a buyer on its Garden Grove knit and dye house and other positions that could stay on as the business transitions to new ownership. It’s a dramatic end to a more than two-year saga that first dominated headlines with the firing of its controversial founder and former chief executive officer Dov Charney, which was followed by two bankruptcies under two other ceo’s and a fire sale of parts of the business that received court approval last week.

Former employees hugged and took pictures with each other and of the factory as they streamed out across the parking lot to the company’s entrance facing Alameda Street, where Charney himself was on hand as he told them about his new T-shirt firm in Los Angeles.

“Come help me,” he told the workers who crowded around him.

Charney, when asked by WWD how many people he thinks he could realistically hire, said the number was in the dozens, but not the hundreds that are in the midst of being let go.

One former employee, who came to pick up her check Monday, said no severance package was being offered and some workers were told to come back at 4 p.m. because their checks weren’t ready.

Employees could be seen Monday lining up outside the company’s Factory Boutique, a recently closed store on the ground floor of the Los Angeles headquarters, to pick up their final checks and obtain other paperwork.

A 20-year veteran of the company who had worked in the factory said he lined up at 5 a.m. outside the Factory Store.

“They told us no more jobs. That’s it,” said the worker, who requested anonymity. “Everybody’s very, very upset. It’s a difficult situation.”

The firm notified the state in November that nearly 3,500 jobs could be cut, but the decision ultimately hinged on a buyer for the business, which filed for its second bankruptcy about a week after the notification to the state.

Clarity on the situation came last week when Gildan Activewear Inc.’s $88 million purchase of American Apparel’s intellectual property and some of the equipment, along with about $15 million in wholesale inventory purchase orders, received the green light from a judge. Smaller deals, including two landlords bidding to buy back their leases from the company on two retail properties, were also approved along with the then-pending deal to Broncs Inc. for its Garden Grove facility. The new owner of the Garden Grove plant is expected to help save about 300 jobs there.

The American Apparel stores are expected to shutter in the next 90 to 120 days, one executive said.

“The company issued a WARN Act notice several months ago, letting employees know that depending on the buyer of the business, a sale could result in eventual shrinkage of some business areas,” a company spokeswoman said Monday. “American Apparel has been in constant written and verbal communication with employees, letting them know how the sale process has been going all along, and what to expect. Because American Apparel cares deeply about its employees and their futures, the company has been offering high-quality career mentoring and a resource center, and a job fair to all employees at no cost to them, on-site for the past several weeks. They are still able to take advantage of these resources today.”