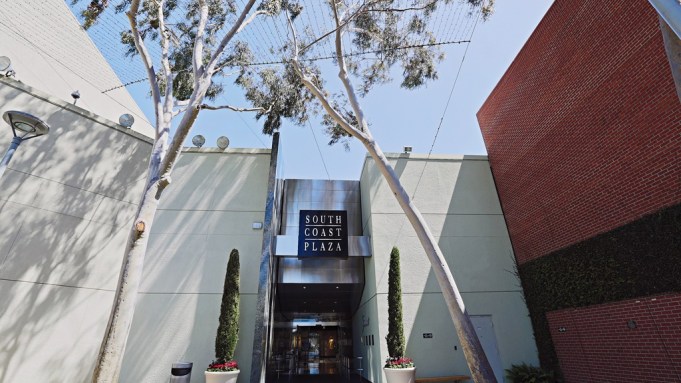 To say that Anton Segerstrom’s life is intertwined with South Coast Plaza is an understatement. At the age of 9 in 1966, he was one of three people — his brother Toren and cousin Ted were the other two — who cut the ribbon for the original May Co. store, which marked the Segerstroms’ retail debut. A year later, his ribbon-cutting skills were put to the test again to initiate South Coast Plaza and its first 70 stores.

“As a youngster, it was sort of hard to comprehend what it was all about. Recall that Orange County was an agrarian community back then and it wasn’t developed. There weren’t a lot of things you could do. It was bucolic. Going to a movie in a theater was a big event. There was very little else going on,” recounted Segerstrom, a current partner in South Coast Plaza owner C.J. Segerstrom & Sons. “That was kind of the beginning of my involvement in the business.

Segerstrom’s association with South Coast Plaza would take many different forms — for example, he’s dabbled in financial forecasting, construction, marketing and leasing — over the years. As a teenager in the Seventies, Segerstrom stocked the Courrèges store to earn money during his summers out of school.

“It was a little esoteric for me,” he admitted, but he realized “it was a very forward store for the time and a beautiful, beautiful store.”

A reserved, outdoorsy type who is as comfortable on a mountain as in a Chanel store, the public aspect of being part of South Coast Plaza’s management and a prominent voice in support of the Segerstrom family’s efforts isn’t entirely natural to him, but he’s warmed to the role.

“I think my father always wanted me to be involved,” said Segerstrom, 55. “It was a nice option to have available. I had to explore what I wanted to do with my career. I’m very fortunate to have this opportunity. It is a wonderful organization to be involved with.”

The South Coast Plaza organization has Henry Segerstrom’s fingerprints all over it, and his lessons aren’t lost on his youngest son.

“My father has always had an eye for quality above all. One of his sayings is that you sell on quality and not on price,” said Segerstrom. “Everything that we do, from our store construction to our landscaping, we always try to do the best we can and the price is secondary. That has really rewarded us well. It has been a winning formula.”

In the late Eighties, when most shopping center owners courted big-box retailers, Segerstrom pointed out his father didn’t waver from his commitment to luxury.

“The philosophy is, the more exclusive and unique the retailer, the greater distance people will come to visit it. Consequently, we draw from a 100-mile radius. Most centers will draw from a seven or 10-mile radius,” said Segerstrom. “About 35 percent of our business is from tourists. The reason they come to South Coast Plaza is not only because of the environment we have created, but also the unique stores.”

Luxury has continued to be a mainstay of South Coast Plaza. Even as the Great Recession was roiling the retail landscape in 2008, Balenciaga, Christian Louboutin, Harry Winston, Oscar de la Renta, De Beers, Canali and Rolex came to the shopping center. Newcomers last year included Vacheron Constantin, M Missoni, Barbara Bui, Red Valentino, Jaeger-LeCoultre and IWC Schaffhausen. This year, Lanvin has opened a store, and Berluti and Bernini are next up on the retail docket.

To create an atmosphere in line with its luxury retailers, cultivating exceptional service has been critical at South Coast Plaza. Segerstrom noted it was one of the early shopping centers to have valet parking and a concierge.

Today, there are five concierges, and VIP shoppers can patronize an Access Suite for enhanced amenities.

Segerstrom said, “It is common that people will drive past Los Angeles to get to South Coast Plaza. We have very convenient parking. We have incredible security. We have a selection that’s really unparalleled. When you talk about urban destinations, they can be more difficult for a shopper. They have to move their car around and might have to pay for parking. Customers from Los Angeles like all the amenities we have here, all the ease of convenience, the selection of stores.”

Space is tight at South Coast Plaza with the vacancy rate near zero. However, the shopping center has introduced 20 to 25 new stores annually for the past five to 10 years. Segerstrom acknowledged that the recession contributed to square footage being made available for incoming retailers, but the recession isn’t the primary reason for the store shifts. Newness is a business priority at South Coast Plaza.

“We have a very proactive management style,” he said. “We monitor the sales performance at all our stores. If trends are changing, we try to react and, in some instances, recapture space and re-tenant it with tenants we feel are more appropriate for the market.”

South Coast Plaza’s strategies are working. In 2012, the shopping center recorded $1.5 billion in sales from its 250 stores and restaurants occupying a total of 2.8 million square feet of retail and dining.

Henry Segerstrom said the Macy’s, Nordstrom and Bloomingdale’s units at South Coast Plaza have all registered sales increases of more than 30 percent year-over-year in February.

Overall, Anton Segerstrom said, “Our most recent sales reports are strong double-digits. Some of our luxury retailers are doing unbelievable well.”

He detailed that ready-to-wear, jewelry and accessories are among the top-performing categories.

Anton and Henry Segerstrom have been careful not to position South Coast Plaza to compete against e-commerce. Borders, which closed its store at the shopping center after filing for bankruptcy in 2011, provided a case study for the Segerstroms on the dangers of rivaling the Amazon dot-coms of the world.

Looking forward, $2 billion in annual sales is the shopping center’s goal. Segerstrom said he’s eyeing retail concepts from Europe that aren’t U.S. staples to bring to South Coast Plaza. The center won’t pursue major expansions to put those retailers in its confines, but will rejigger space as it has in the recent past to find more room for existing stores and locate new ones.

Segerstrom said he’s identifying designers “we can work with and we are reaching out to many who are not here now. We are in a position where we have an opportunity to have the option to work with some very exciting retailers and designers, so we are trying to finalize those arrangements.

“I don’t see in the future the center getting larger. I don’t think bigger is better. Better is better.”

To maintain its quality standards and distinct point of difference, Segerstrom was adamant South Coast Plaza must resist the urge to lease stores that blanket malls across the country and around the world.

“One of the biggest threats to our business is sameness, just being a mall. We are allergic to that. We are not a mall. We will never be a mall. We want to be a planned retail center that is unique,” he said. “You will see things here that you don’t see at any other center in the country. The validation of that is that the customers and people we meet that do the most traveling are the ones that are most impressed with South Coast Plaza because they have context.”