Giorgio Armani's newest scent Idole d’Armani is due out this fall.

By Gillian Koenig and Pete Born on May 22, 2009
View Slideshow 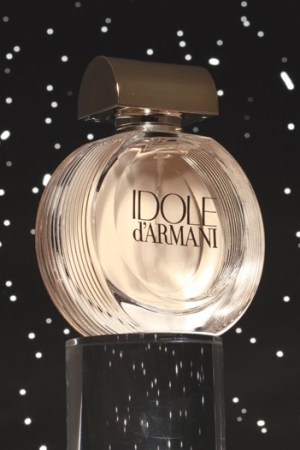 Every man has his muse and for Giorgio Armani there have been many. With his latest fragrance, Idole d’Armani, the designer wanted to celebrate the women who have influenced his life, both professionally and personally.

“He wanted to do a real tribute to femininity, a big thank you to all the women who have inspired him over the years,” said Jean-Pierre Charriton, president of Giorgio Armani Parfums Worldwide.

Designed to echo the sensuality and fierce independence of these leading ladies, Idole d’Armani, under the Giorgio Armani umbrella, adds a whole new dimension to Armani’s family of fragrances.

“It brings a lot more personality,” said Stephane de la Faverie, general manager of Giorgio Armani Beauty in the U.S. “It’s something new and different from the rest of the portfolio.”

During a recent visit to New York to open his Fifth Avenue flagship, Mr. Armani sat down for a few minutes to discuss his decades-long involvement with the sometimes-fickle fragrance business and his expectations for his newest scent. “With this fragrance, I hope I’m going to find a clientele that will be more faithful and will stay with the fragrance, a scent that will become a classic.”

Due out in the fall, the signature scent is meant to crack the women’s market for the designer and his beauty licensee L’Oréal. While Armani has become a beauty powerhouse in the men’s category, with two of its fragrances holding top-five positions last year, its female segment has yet to catch up. The most recent launch last year of Onde, a trilogy of oriental fragrances, was geared toward a more selective circuit of distribution, while the more broadly distributed Armani Code for women, which was launched in 2006, placed the brand in the number-six spot globally in 2007 and remained in the top 10 for 2008.

With Idole d’Armani, L’Oréal is shooting for a top-five global ranking.

“The Code for women launch was quite successful and there is already some sort of territory built with that,” said Charriton. “Our goal with Idole is to make the women’s bigger than the men’s — to be a leading global player in the women’s fragrance business.”

When asked what he thinks it will take to make his women’s business as successful as his men’s, Armani laughed. “It’s much more difficult,” he said. “Women are very unfaithful — psychologically speaking. Maybe it’s because I’m a man and I know what men like. [They] like fragrances that [make them] feel like a man. Now there is too much promiscuity between a female and a male fragrance.”

Idole d’Armani will launch globally in about 20,000 doors in 150 different markets this September. Industry sources estimate the launch could generate upward of 100 million euros, or $137.7 million at current exchange, in first-year sales. As part of that effort, Giorgio Armani Parfums will also embark on a massive print and television campaign for the fragrance. Shot in Paris this week by Solve Sundsbo, the scented-strip print strategy will bow in all major fashion and beauty books in October, while the TV spot, directed by Anne De Maupeou and Frederic Temin, is slated to run in September. L’Oréal executives refused to discuss budgets, but industry sources estimate, based on the sales target, that Giorgio Armani Parfums might spend northward of $40 million on media.

“One of our big focuses with this is the U.S.,” said Charriton. “We’re working very closely with our team there for a fragrance that speaks to the market.”

Armani noted: “American women like a certain kind of fragrance, stronger and very personal,” he observed. “I sometimes say it’s a little bit like an elevator fragrance. When a woman gets onto an elevator, you can smell this fragrance. It’s a bit too much.”

Idole d’Armani, a spicy floral fragrance developed with Bruno Jovanovic of International Flavors & Fragrances, opens with Sicilian clementine, juicy pear, ginger and Indian davana. Its heart is of absolute saffron, Egyptian jasmine, and loukoum rose, and the drydown is of patchouli and vetiver.

“This inner beauty is linked to the floral notes but it also celebrates the strength of a woman, which comes from this spiciness,” said de la Faverie.

Designed by Armani, the circular glass bottle reflects the designer’s fascination with the Art Deco period. Delicate rivets along the side are meant to capture light and radiance — signifying a woman’s inner strength — while the circular shape is designed to represent femininity.

As for future plans for the Armani fragrance franchise, Charriton said a series of launches will follow Idole, with another women’s scent under the Giorgio Armani umbrella expected to surface in the next year.

Armani, who has established businesses in men’s and women’s fragrances, color cosmetics and skin care, expressed his frustrations at times with developing a women’s scent.

“She’s much less faithful and more sensible to new things coming out,” he said, describing how the market has changed over the last two decades. “Of course, I don’t want to say that a woman can’t experiment, but there has to be a basis, like for men. I’ve been lucky to be selling men’s fragrances for 20 to 25 years. Often, my customer looks for other solutions, but then he comes [back] to his first love. This is great. If it happens, it’s great.”

Speaking about his expanding beauty empire, Armani said his ambition is not so much to build a freestanding house of beauty, but he clearly wants the business to be important. “My idea is that of speaking to a public that in the same way they love my clothes, they also love my fragrances. Everything is very connected,” he stated.

So the question arises as to where he would like to go next. “Definitely sun care,” he quickly answers, “but with products that are very true. If they are supposed to protect your skin, they truly have to protect your skin. The skin care is something that I like, the one that I make, because it doesn’t overburden your skin. It works very well. Men don’t want to be taken advantage of; they don’t want to be taken for a ride. A man wants to use a product that works for the purpose he wants it for.”

L’Oréal launched a men’s treatment range to accompany the original women’s skin care about a year ago in Europe, where it continues to be marketed. Sources at L’Oréal say plans are being discussed to bring three of the men’s products to the U.S. in July.

Armani said he would like develop “sun care and other products” for men.

Asked if he would like the Armani name to be as important in beauty as it is in fashion, the designer smiled slyly and replied, “that would be nice.”