The chairman of LVMH Moët Hennessy Louis Vuitton hit the nation’s capital Thursday like a politician on the campaign trail. 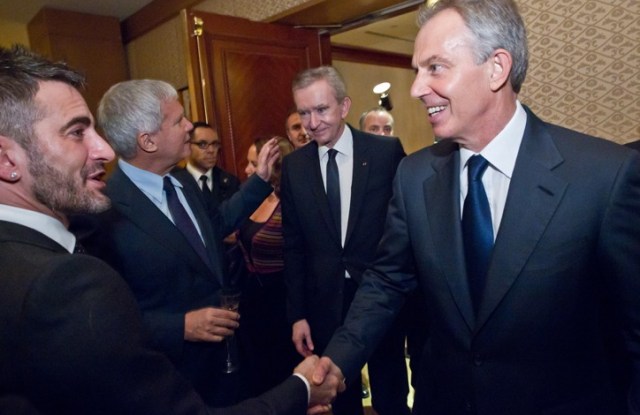 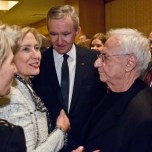 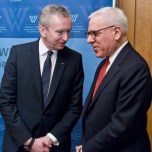 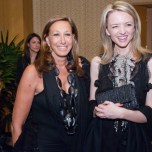 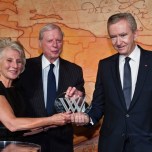 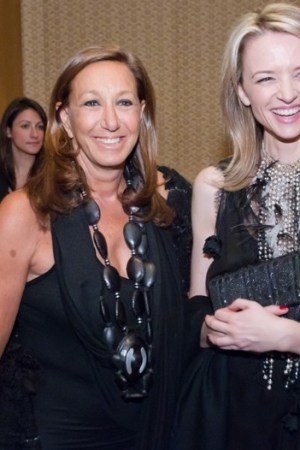 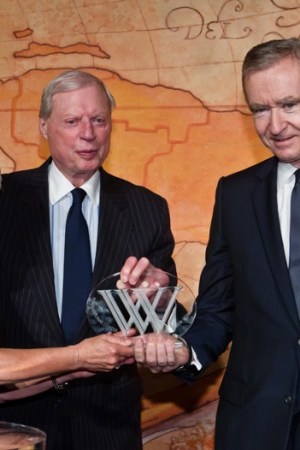 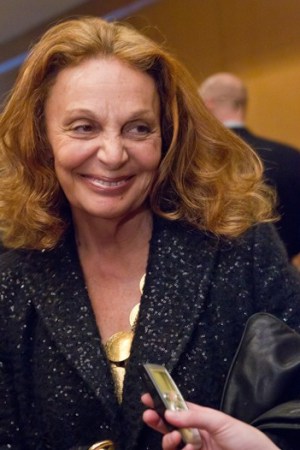 WASHINGTON — Bernard Arnault hit the nation’s capital Thursday like a politician on the campaign trail.

The chairman of LVMH Moët Hennessy Louis Vuitton first met President Obama at the White House — where they discussed everything from globalization to employment — and then that night received the Corporate Citizenship award from the Woodrow Wilson International Center for Scholars. The night was filled with the Arnault Admirers Club, a diverse group of power elites who circulated around Arnault like electrons around a nucleus. The event drew the likes of Secretary of State Hillary Clinton; former British Prime Minister Tony Blair; J.C. Penney chief executive officer Myron E. “Mike” Ullman 3rd; Mark Weber, ceo of LVMH Inc. and chairman and ceo of Donna Karan International; Kevin Burke, president and ceo of American Apparel & Footwear Association, and Diane von Furstenberg and husband Barry Diller, as well as Donna Karan, Marc Jacobs and a slew of other LVMH-ites.

Also on hand was architect Frank Gehry, who has collaborated with LVMH on designs for the Louis Vuitton Foundation for Creation. Slated to bow in Paris in 2012, it will showcase LVMH’s art collection and provide a forum for young artists.

Obama took time away from battling with Congress over the stalemate of the federal budget that has been consuming Washington. With the President’s ear, Arnault said he discussed LVMH’s commitment to job creation in the U.S. and the importance of globalization.

“I think he is really committed to creating jobs in America, and I explained to him that we have created jobs in California with one of our ateliers, and also in Napa Valley, where we are producing wine in America,” Arnault told WWD.

Fair and sustainable trade was also a theme in Arnault’s acceptance speech later that night at the Four Seasons hotel in Georgetown. He received the institute’s Corporate Citizenship award for his leadership in a broad array of social responsibility and philanthropic initiatives. Fellow Frenchman Jacques Attali, founder and president of PlaNet Finance, received the center’s award for public service for the group’s initiatives in restoring historic monuments, supporting major art exhibits and an extensive corporate social responsibility and sustainability program.

Arnault, who assumed control of LVMH in 1989 and subsequently built a multibillion-dollar luxury empire with more than 60 brands, revealed the business acumen that has driven the company to new heights and also made it a socially responsible player on the world stage.

“To receive this award tonight in your presence is not only an honor but also a very happy, powerful and poignant occasion for me,” he said. “Tonight, you do not just honor me. What you honor with this special award is a commitment of more than 80,000 people with a unique ambition to delight the world, to beautify our universe and to inspire the spirit of our times.

“While I have always been profoundly French, I have a deep and abiding admiration for these characteristics, which are among those that have made America great,” Arnault continued. “Included in these today is the idea that corporations are also citizens with social responsibilities, a concept that I think of as distinctly American. I’m proud to say that we have adopted this principle at LVMH and we apply it not just at home in France, but around the world.”

He also stressed LVMH’s dedication to a “moral code that is nonnegotiable, even if this sometimes means taking very difficult and public decisions because they are simply the right thing to do, whatever the impact on our business,” an apparent reference to the company’s firing of disgraced Dior designer John Galliano.

The “right rules to avoid unfair competition” were also a key point for Arnault, who pointed to the global fight against counterfeiting, an endeavor LVMH has spent millions of dollars on in protecting its brands. And he called for guidelines “that make it possible for companies to operate on the Internet with fair ground rules and for consumers to feel confident that what they are buying is genuine, whether it is a pharmaceutical or luxury product.”

While LVMH may not manufacture trains, cars or rockets, or produce energy, what it does do is important, Arnault said.

“You can tell time, dress beautifully or wear makeup produced by one of our brands anywhere in the world, regardless of your nationality, your beliefs or your culture,” he said. “By bringing to emerging countries the very same products that we sell everywhere else in the world, I’d like to believe that, in our own modest way, LVMH contributes to bringing people of the world closer to each other.”

Arnault won praise from an array of heavyweights on Thursday night. Blair jokingly explained how difficult it was for a “Brit” to praise two “true Frenchmen.”

Calling both honorees “radicals,” Blair said they “took traditional concepts of business and academic life and changed them.”

“LVMH, under Bernard’s leadership, broke new ground in terms of fashion and brands and marketing, and tonight I’m not even going to concentrate on any of those things,” said Blair. “What I want to concentrate on is how he changed our ideas of corporate responsibility.”

He praised LVMH for being one of the first companies to create an entire department dedicated to improving the environment, citing the company’s establishment in 2001 of an “environment charter,” committed to sustainability and reducing its footprint on the global environment.

Marc Jacobs said in a video tribute to Arnault that also featured U2 lead singer Bono and other luminaries, “We all work hard to win his approval.”

In an interview before the dinner, Jacobs said Arnault “is a great supporter of all art forms — from good wine to beautiful interiors to great art to great fashion. I just think he’s a great businessman and a great appreciator of the art of living.”