Services will be held Friday for Arnold Aronson, principal director of retail strategies of Kurt Salmon and a former chairman and chief executive officer of Saks Fifth Avenue, who died Tuesday morning at his Manhattan home. He was 85.

The service will take place at Central Synagogue at 652 Lexington Avenue in New York at 10:30 a.m. The cause of death couldn’t be learned at press time.

Aronson had been managing director, retail strategies for Kurt Salmon since 1997, and was named to his current role in 2016. His expertise covered merchandising, marketing, supply chain, omnichannel, organizational design, store operations as well as financial and investment management. Kurt Salmon is part of Accenture Strategy.

Born in the Dorchester neighborhood of Boston, Aronson graduated from Harvard College with a Bachelor of Arts degree and received a Master of Business Administration from Columbia University. He segued from a distinguished retail career to a successful management consulting role, where his client list spanned all channels of retail and wholesale distribution.

Colleagues described his wise counsel and guidance throughout their careers and said that he knew how to spot and nurture talent. He also stayed current and understood omnichannel and how the consumer and technology were disrupting the retail landscape.

Aronson began his career at Bloomingdale’s as a buyer and became divisional merchandise manager. He then moved to Los Angeles as executive vice president and general merchandise manager of May Co.  He later became ceo of Bullock’s in Southern California, a division of the then-Federated Department Stores.

In 1979, Aronson returned to New York and became ceo of Saks Fifth Avenue, playing a key role in the company’s profit turnaround and national expansion. He subsequently was named ceo of the Batus Retail Group, the parent company of Saks, Marshall Field’s, Kohl’s, Gimbel’s and other retail entities. He is credited with integrating the Marshall Field’s acquisition and developing a full range of corporate support services for the-then over $4 billion retail conglomerate.

In 1987, Aronson formed an investment firm specializing in leveraged buyouts of retail businesses and in 1989 purchased an equity position in Woodward & Lothrop/John Wanamaker, then becoming its chairman and ceo. In 1994, Aronson was named senior partner in charge of the management consulting practice at Levy, Kerson, Aronson & Associates and in 1997, then merged with Kurt Salmon.

Aronson also served on the Ralph Lauren board from 2001.

Ralph Lauren said Tuesday, “I am deeply saddened by the news of Arnold Aronson’s passing. He was not only a valuable member of our board, but over the course of nearly two decades, Arnold became a dear friend and trusted adviser. He was an early believer in me and in the vision of our brand, and for that I will forever be grateful. He brought a depth of knowledge and perspective that was always delivered in the most thoughtful way. I will miss his guidance, his friendship and especially his kindness.”

Throughout his career, Aronson developed a reputation for spotting talent. While running Saks, he recruited Arthur Martinez from RCA’s record division to become the store’s chief financial officer and later became ceo of Sears Merchandise Group. Aronson tapped Philip Miller, then president of Neiman Marcus, as ceo of Marshall Field’s, then part of Batus, and Miller ultimately became ceo of Saks. Aronson also recruited Allen I. Questrom from Abraham & Straus to work with him at Bullock’s as the home store general merchandise manager. He later became ceo of Federated Department Stores, Neiman Marcus, Barneys New York and J.C. Penney.

Burt Tansky, former ceo of the Neiman Marcus Group and a former president of Saks, said, “I was very fond of Arnold and I’ve known him since 1979.”

He added, “He was a very good executive. He was a very good merchant and a good manager. He was good with people and he cared about people. I always found him someone you could rely on and work with, and always enjoyed being with him. Over the years, we’ve stayed in touch.”

Michael Gould, former ceo of Bloomingdale’s, said, “I think he had an enormous passion for the industry and had a commitment and burning desire to nurture young people  to come into this industry and prosper like he did. I used to tell him he was a frustrated professor. He had a real interest in learning things and not just about retail. He had an inquisitive mind and stayed active.”

Miller developed a close friendship with Aronson, whom he considered a mentor. “He was a very intelligent, thoughtful, very considerate, a supreme gentleman. He was very wise. He understood the retail business and business in general very well. He was very successful in his career and guided a lot of people through their careers, as he did me,” said Miller.

Ron Ruskin, former president of Batus, said, “I had the good fortune of working with Arnold for many years.  He was a man of the highest integrity.  Although I was privileged to be his colleague, most important, he was a treasured friend.”

Ron Frasch, who has his own consulting firm, Ron Frasch Associates, and was the former president and chief merchandising officer of Saks, said that he and Aronson had been friends since the late 1970s when he worked for Aronson. “He gave me my first really big break in my career. He didn’t make it easy, he made it tough for me,” said Frasch.

Frasch recalled that he was managing the Boston Saks and wanted to get out of store management and become a merchant.  “I was a cocky kid and said I was as good a merchant as anyone you have in New York and I want a chance at it,” said Frasch. Aronson said OK, and he said he’d pay him the same salary, but he’d have to figure out how to get down to New York and handle all his own expenses. “I dragged my family down here, and I’d never been a buyer. He gave me a shot as an associate divisional merchandise manager. He gave me my first opportunity and I’ll never forget it,” said Frasch.

“He was so smart and so thoughtful, and so balanced. He knew how to support people and make sure they perform. He wasn’t easy. He was more than fair, and believed in giving people opportunities. He was a great leader and a wonderful human being. In his consulting role, he provided great counsel and guidance,” said Frasch.

For years Aronson had a second home in Santa Fe, and he and his wife would go out there and enjoy life, said Frasch.

“He was a great counsel, a sounding board and mentor to me from the time I took over Saks. We spent lots of time talking about strategy and people. He knew the organization,” said Sadove. “He really was instrumental in maintaining the Kurt Salmon relationship with Saks. It was partly a mentor role, and he was always thinking of new things Kurt Salmon could do to add value to Saks. He was the consummate salesperson,” he said.

“He knew the business, he knew the industry and he stayed current. He was a great board member at Ralph Lauren. He was one of the earliest people who understood and could conceive of where omnichannel was going. He really was at the forefront of some of the thinking in terms of how the consumer and how technology was changing into this new disrupted retail world,” said Sadove.

Roger Farah, chairman of Tiffany & Co., said, “I know Arnold as a boss, as a mentor and as a friend for over 40 years. He came to Saks Fifth Avenue as the ceo when my wife and I were both buyers there. He was just a special, unique man and leader. He really cared about people, he was very interested in the person, what was important in your life, and was endlessly supportive of me in my career and my various steps along the journey.

“We ended up becoming very good friends with both Arnold and his wife, Sheila, and remained friends until the end. He cared about people, he cared about philanthropy and he cared about business in the proper perspective, and I’ll miss him terribly,” said Farah.

Aronson was a member of the board of trustees and its executive committee of The New School University and was a member of the board of governors and former chairman of its Parsons School of Design. He and his wife, Sheila, were the benefactors of the Arnold and Sheila Aronson Galleries at Parsons and generously supported the university in numerous ways. He established a fellowship with his wife at Parsons called the Arnold and Sheila Aronson Fellowships and Archive for Environmental Sustainability. Aronson was also a driving force behind the Parsons Benefit for many years and helped to forge the school’s strong relationships with the fashion retail industry. 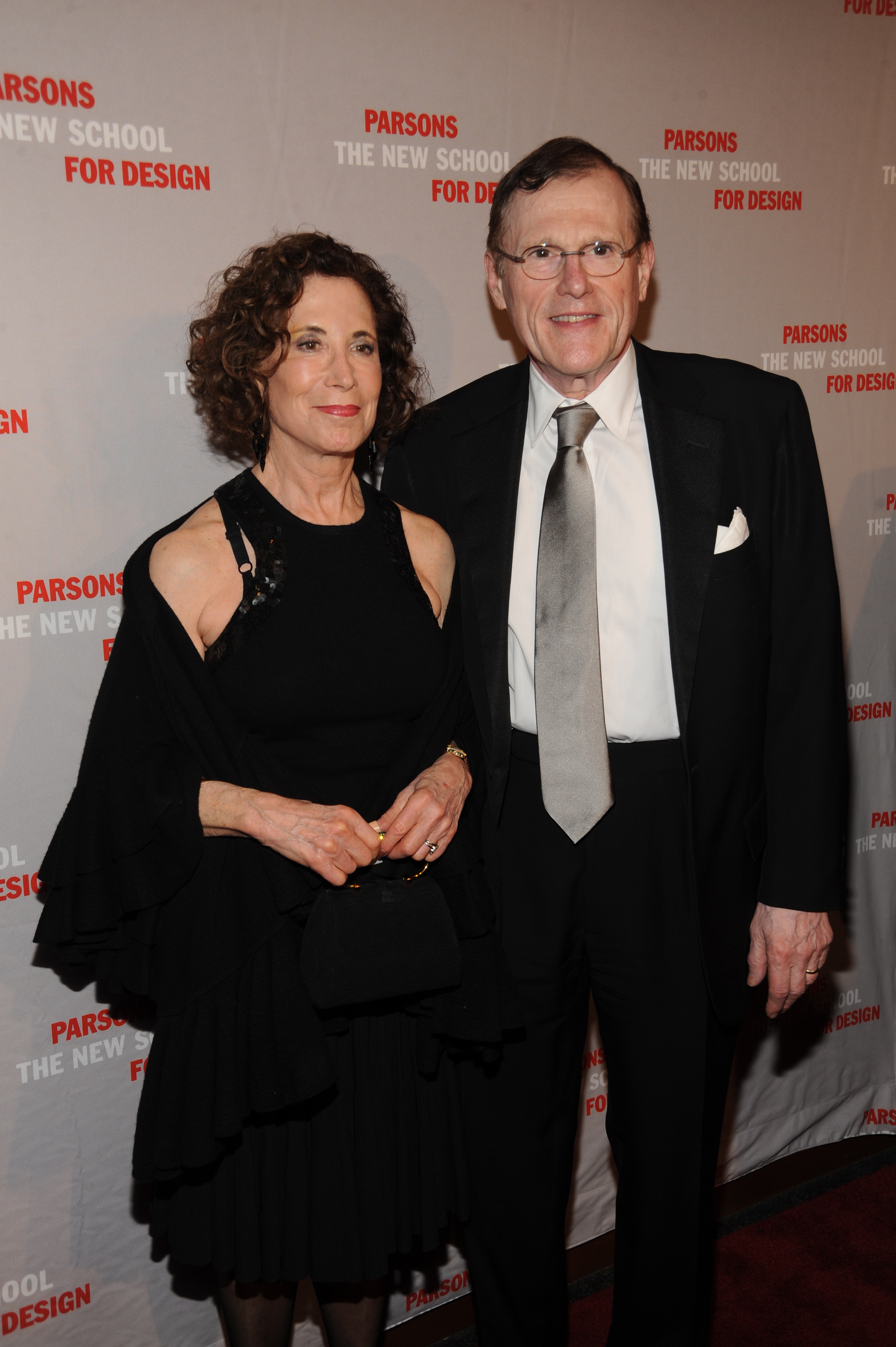 Joe Gromek, chairman of the board of The New School, said, “Arnold was a one of a kind, world-class retailer and an accomplished strategic advisor and among the most active, supportive, generous and enthusiastic members of the Parsons and New School community. He was a trustee for 39 years and chaired the Parsons board of governors for 13 years.”

In addition to his wife, Sheila, Aronson is survived by their two sons, David and Steven.