The cofounder of Liz Claiborne Inc. and wildlife conservationist was 87.

By Lisa Lockwood and Evan Clark and Rosemary Feitelberg on February 4, 2014
View Slideshow 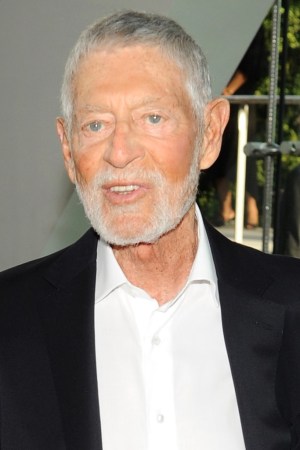 Ortenberg, 87, died of complications of pneumonia and kidney failure, according to his son, Neil.

News of Ortenberg’s illness surfaced last week when his companion, Cathy Horyn, stepped down from her role as chief fashion critic of The New York Times to care for him.

Ortenberg started the sportswear company Liz Claiborne Inc. in 1976 with his late wife, Liz Claiborne. Within 13 years, when they retired, the publicly traded firm was generating $1.41 billion in sales and $164.6 million in net profits and had arguably become one of the biggest success stories in the fashion industry. Ortenberg then turned his attention to wildlife conservation.

Born in Newark in 1926, Ortenberg served in the Navy during World War II, and graduated from the University of Wisconsin. He spent the early part of his career as a partner in a textile firm and a textile/apparel consultant.

According to his son, Ortenberg was an antiwar civil rights activist and had a huge influence on him. “He took me to peace marches and he took me to hear Martin Luther King. We’d listen to Jimi Hendrix and The Who,” said Neil Ortenberg, a filmmaker and writer. “He really was quite an amazing, idealistic person. The interesting thing to me was he went from that persona to Liz Claiborne Inc., where he became a brilliant businessman and took the company public.”

Ortenberg and Claiborne met in 1954, when he hired her to design Joan Miller dresses (a division of Rhea Manufacturing). Although they were both married to others at the time, they began an affair. They moved on to assorted textile and apparel firms, and in 1957, they married. In 1975, they decided to go into business together, and raised $250,000 from family and friends. The duo turned Ortenberg’s consulting space at 80 West 40th Street into a design room and showroom, obtained credit and took out a classified ad in WWD for a production executive who was experienced in quality goods, which landed them another partner, Leonard Boxer. The company was incorporated in February 1976. Jerome Chazen joined as a partner in 1977.

Reflecting on the early days, Ortenberg, who initially served as secretary-treasurer, told WWD in 2006, “We had wonderful systems. We had a group of young people who were ferociously brilliant and energized. We would go to Hong Kong, and people would get out of the way. Having never gone to business school, I considered business school graduates dolts and traditionalists.”

In that interview, Ortenberg said the four partners had a great arrangement. “Jerry [Chazen] was totally in sales, I was in operations and finance, Liz was design and Leonard [Boxer] was production,” said Ortenberg. “Art always had the vision,” said Claiborne in 2006. “I thought we’d be a nice little company.”

But the influx of women heading into the workplace and Claiborne’s finely tuned eye for sportswear were a potent combination. The company was able to offer value and prices that hadn’t been previously available in the U.S. by shifting production overseas. The majority of Claiborne’s clothing was produced overseas; the company had factories in Hong Kong, Korea, the Philippines, Taiwan, Israel, the Caribbean, and Central America.

Although his background didn’t foreshadow that someday he’d hit it that big, Ortenberg said, “I saw it as a three-dimensional chess game, with the chutzpah that if you really worked at it and you had a strong capital base, you could defeat scale. But nobody has done that.”

During his tenure, Ortenberg was an outspoken proponent of free trade and used to consider working conditions when choosing factories. “We used to say there were worse factories in Brooklyn than in the Orient,” said Claiborne in 2006.

“He was the logical, rational yin to Liz’s creative yang,” said Paul Charron, who was a friend of Ortenberg’s and joined Claiborne in 1994, rising eventually to chairman and chief executive officer.

“He was a visionary in translating Liz’s creative approach, her creative skills into a commercial vein,” Charron said. “One part of the success of the company was the quality of the design. Another part of the success was the quality of the make and Art was very involved in guiding and shaping the use of Eastern sourcing in order to get well-made products at a very good price.”

Jay Margolis, chairman and ceo of Caché Inc., worked with Ortenberg and Claiborne for 10 years and would have dinner with them three nights a week. “There was no smarter, better, more thoughtful and more value-oriented person in the business than Art Ortenberg. He knew everyone’s name and was so thoughtful about every aspect of the business. He understood everybody’s role and responsibilities. He would surround Liz with the right people to make sure she had everything she needed to be Liz,” he said.

Margolis noted that Ortenberg — who came to work every day in khaki pants, light blue shirt and navy blue blazer — came out of the piece goods business and knew everything about textiles. He was also a grand master in chess.

“Liz always got credit because Art gave her credit. He played the role of Mr. Liz Claiborne, but he was the genius behind Liz Claiborne,” said Margolis, who became vice chairman of the company. He added that every factory person thought of Ortenberg and Claiborne “as family.”

“No one created a better culture [at a company] than Art Ortenberg. It was the best in the history of the [apparel] business,” he said.

Chazen, who became Claiborne’s chairman upon Liz Claiborne’s retirement, met Ortenberg at the University of Wisconsin where they roomed together in the second semester of their freshman year in 1944. “We were both interested in a lot of the same things — reading, literature and other stuff. I was convinced Art was going to be a college professor. He just kind of had that attitude and aptitude. But he chose the world of business, which was kind of interesting,” said Chazen.

“Our relationship became more solid after he married Liz. Liz and I were very close,” said Chazen. He said that for years department stores had only sold apparel in designated departments. “We offered coordinated separates. We showed them together so a woman would understand how to dress herself. We broke a lot of rules,” he said.

Dana Buchman, who went to work for Ortenberg and Claiborne in 1982 and stayed for 30 years, said Tuesday, “People may not remember this now, but they really changed the face of sportswear at a time when women were done with dressing like men for work. It was great quality sportswear that was tasteful, timeless and tailored with a sense of fun and color.

“She [Claiborne] was a designer but he was the merchant that made space for her and her design team. They believed in the product and loved what they did. They were kind of idealists in a way. There was nothing cynical about their business. They were personally dedicated to what they did,” Buchman said.

During her Liz Claiborne days, Buchman said Ortenberg also made a point of having designers sit in on sales meetings so they would know exactly what was selling. “That was the point — none of us were in fine art,” she said.

Laurence C. Leeds Jr., chairman of Buckingham Capital Management, said, “He was a very smart guy and they [Ortenberg and Claiborne] were a dynamic and stimulating couple. They were very intellectually attractive, vibrant and not easily humored. He was devoted to excellence in every aspect of his business and personal life.”

In 1987, Liz Claiborne Inc. was recognized by Fortune Magazine as the third “Most Admired Corporation” and in 1988 as America’s fifth “Most Admired Corporation.” In April 1989, Fortune Magazine recognized Claiborne and Ortenberg as chief executives of the highest ranking American corporation for return on investment for the years 1978 to 1988, an annual average of 40.3 percent. In 1990, they were inducted into the National Business Hall of Fame. In 1991, they were inducted into the National Sales Hall of Fame. Ortenberg also served as a Trustee of the Library of Congress.

When they walked away from active management in June 1989, Claiborne and Ortenberg were multimillionaires and ready to build a new career in philanthropy, having established the Ortenberg Foundation in 1984, which became the Liz Claiborne and Art Ortenberg Foundation in 1987. Since 1990, the foundation has provided more than $70 million in grants to numerous nature conservation, wildlife and educational projects around the globe, according to James Murtaugh, program director of the foundation. He said Ortenberg’s intention “is for it to continue on in perpetuity.” He noted that Ortenberg was actively engaged with the foundation on a daily basis up until about two weeks ago. “It was a complete passion of his,” he said. The foundation will be headed by ecologist David Western, a board member since 1987.

The foundation has funded dozens of conservation management and educational programs in places from Montana to the Congo, Kenya, Madagascar and Belize, as well as provided grants to protect such wildlife as the elephants in Africa, tigers in India, penguins in Patagonia, antelopes in Tibet and jaguars in South and Central America.

“He was an extraordinarily effective conservationist,” said Bill Conway, senior conservationist at the Wildlife Conservation Society. “His background wasn’t as a scientist, but he had an innate approach to wildlife conservation that depended on facts, not emotions. It was amazing what they have achieved in the Far East, South America and North America, especially Montana,” said Conway.

Once they retired from Claiborne, Ortenberg and Claiborne spent three-and-a-half months a year in Montana. During the summer, they would go back and forth between Manhattan and Saltaire, Fire Island, and in the winter, they traveled between the city and St. Barth’s.

Ortenberg never had any doubts that once he and Claiborne retired, they’d be out of the picture.

The couple was quick to acknowledge that as much as they loved and benefited from the company they started, and enjoyed reminiscing about the early days, its future was entirely out of their hands.

“The whole business of thinking you can perpetuate something is fool’s currency,” said Ortenberg in 2006. “The minute you slam the doors behind you, all hell breaks loose.”

Liz Claiborne Inc., which in 2006 posted annual volume of $4.99 billion and a portfolio of 40 brands, sold its namesake Liz Claiborne brand to J.C. Penney Co. Inc. in 2011 and shed many of its other brands. Claiborne changed its name to Fifth & Pacific Cos. Inc. in 2012, and after selling off Juicy Couture and Lucky Brands, will become Kate Spade & Co. on Feb. 25.

In addition to his son Neil, Ortenberg is survived by a daughter, Nancy Ortenberg, and stepson, Alex Schultz.

A memorial service is being planned for next month.