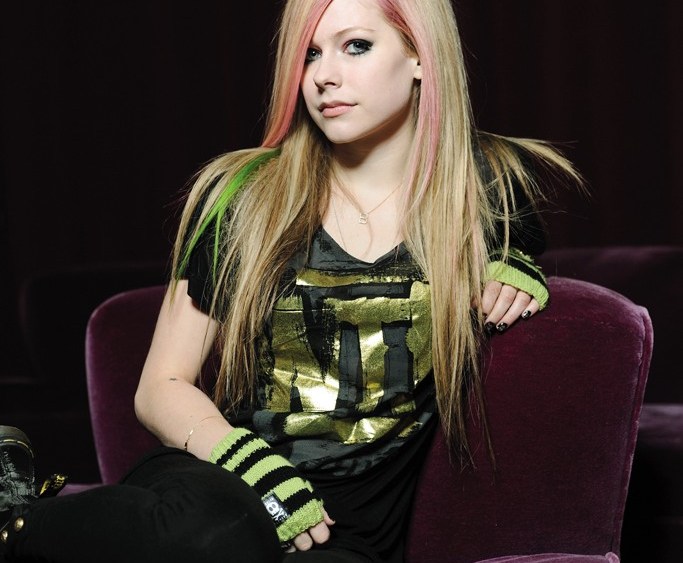 While Avril Lavigne is perhaps best known as a singer and songwriter, she is quickly building brands in both the fashion and beauty worlds. The latest: a deal with Coty division Sally Hansen, which had the 27-year-old create a nail collection for its Salon Effects brand.

Launching globally in April, the limited edition collection includes 12 designs of nail polish strips — including tiny skulls and leopard prints, Lavigne’s favorites — which are inspired by Lavigne’s style and music. Each $9.99 kit includes 16 nail-polish strips, a cuticle stick, a mini-file and buffer and instructions for at-home application.

“This is pretty much the coolest thing, because I also do clothing — I love clothing, nails and fragrance, hair, makeup, all that stuff,” said Lavigne during an exclusive phone interview with WWD Wednesday afternoon. “I was really excited about the Salon Effects Real Nail Polish Strips — especially since they’re superquick. You clean your nails, peel the strips and apply them, file and go. I’m superfast at it, so it takes me like five minutes to do my nails. And it’s supercool because the designs that I came up with are my personal style and vibe — they’re rock ’n’ roll and fun and bright and colorful. You have sparkles and little stars — they are cute. For me, I’ll be flying on a plane and be like, ‘Sh–, I need to do my nails.’ I can do these on a plane; I’ve done them in the car.

“I’m a really visual person; I like creating, and I love to have fun with colors,” she continued. “I think this offers self-expression, and it’s a really smart, versatile way to show your style. I think my fans will really like it, because it’s easy and simple and fun.”

“Avril is a pop music icon, but she has also become a fashion inspiration, known worldwide for her edgy, yet feminine style,” said Steve Mormoris, senior vice president of global marketing for Coty Beauty. “We believe this new collection will appeal to Avril fans and trendsetters alike.” Added Annette Devita, vice president of marketing for Sally Hansen: “She appeals to a younger generation of girls, which makes her a perfect fit for Salon Effects.”

While Devita declined to comment on the collection’s projected sales, industry sources estimated that the limited edition collection would do about $7 million at retail in its time on counter. In the U.S., it will be available in about 25,000 mass market doors. Print advertising will launch in May fashion, beauty and lifestyle magazines, and the lineup will also be promoted via social media, including Lavigne’s Facebook fan page, which has 28.5 million fans, and her Twitter feed, which boasts nearly 3.7 million followers. “I love to use social media to talk about the things I’m doing and connect with the fans,” Lavigne said. “I want to let them all know about this, and tell them to check it out.”

Lavigne isn’t new to the beauty game: She has also created three women’s fragrances with Procter & Gamble Prestige Products: Black Star, Forbidden Rose and Wild Rose. All are sold globally; in the U.S., they are available at Kohl’s.

In fact, Lavigne said she enjoys the beauty category so much that she could see entering additional categories — although she noted no deals are imminent. “I think it would be cool to do hair color,” said Lavigne, who enjoys adding bright-hued streaks to her blonde hair.

Lavigne’s Abbey Dawn fashion line, founded in 2008, is also growing — both in the U.S. and globally, where it is sold at AbbeyDawn.com. “Spring 2012 is a full lifestyle collection — we have footwear, eyewear, swimwear, bags and men’s clothing [as well as women’s clothing],” said Lavigne. “Having the nails is great because it kind of completes it all.”

She acknowledged that there’s a lot on her plate, but said she believes that each project ties into her larger message of encouraging others to express themselves. “Obviously I’m here because of my music, and obviously I’m designing clothing, but fashion is a really big part of what I do,” she said. “So to be doing nails, visually, it totally goes in with everything — my personal style. It all is related.”

The entertainer also now runs the Avril Lavigne Foundation, which does work with sick and disabled children. This past year, Lavigne worked with Easter Seals to create the Avril Lavigne Rockstar Club at Easter Seals, a program to inspire, create and support recreation programs for kids with disabilities. Lavigne noted that her foundation’s mission is summed up in the acronym ROCKS — respect, opportunity, choices, knowledge and strength. “I’ve had the chance to do a lot of charity work over the years, and I wanted to take [my involvement] to the next level with my own foundation,” she noted. “Getting involved with kids that are sick and disabled was close to my heart. I look forward to doing more to help people out.”

As far as her primary career — music — goes, Lavigne is wrapping up her Black Star tour supporting her “Goodbye Lullaby” album with an Asian leg in early February. She then will turn her full attention to her new studio album. Lavigne kept mum about the song topics, but noted that she’s “pretty far into” the recording process. “It’s turning out to be a fun record,” she said.

She turned animated, however, when she discussed working again with Antonio “L.A.” Reid, who signed Lavigne to her first record contract, at Arista. She has just moved labels to Epic Records, which Reid now heads up.

“L.A. Reid is the man,” she said with emphasis. “My experience was he signed me, he believed in me, he got me. He always gave me my freedom to be who I was, to make the type of record I wanted to. On my first album, I was so young — I was 16 when I was making it. Everyone figured that people would write songs for me, and I was like, ‘No, I want to write my own music.’ It was so different from anything that was out there. L.A. was like, ‘She’s onto something. Just let her do her thing.’ So it was great. Later on down the road we got separated when he moved to another record company, and other people came in and took over. It was difficult for me, especially on my last record, working with all these random people that really didn’t even understand me at the record company. And now I get to be back with him, and it’s exciting again. I’m totally reinspired. When you’re writing and creating, you can’t have these businesspeople come in and try to be all business. [L.A.] finds a balance between business and creative, and he’s really good at not making it weird or interfering in the creative process.”

All in all, said Lavigne, she’s excited to face the future. “There are a lot of major changes going on in my career. There’s a lot of fresh energy around me,” she said.