BCBGeneration Looks to the Next Generation

When Max Azria decided he wanted to change the design direction of his young contemporary brand BCBGeneration, he didn’t have to look far for a creative head. 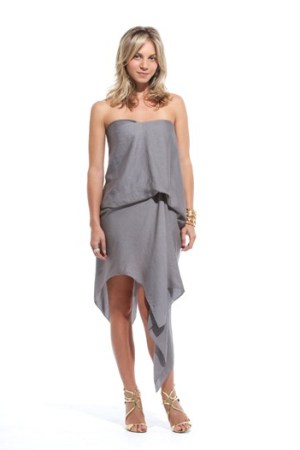 When Max Azria decided he wanted to change the design direction of his young contemporary brand BCBGeneration, he didn’t have to look too far for a creative head.

About seven months ago, Azria asked his oldest daughter, Joyce, to come on board. She had worked as design director with her father on a BCBG Max Azria swimwear line when she was only 16, and now at 28, he felt she could handle the responsibility of the entire young contemporary brand.

“She truly understands the identity of BCBGeneration and the contemporary marketplace,” he said. “I know she will guide the brand in the right direction.”

For Joyce Azria, joining the firm wasn’t the easiest decision. After all, she had closed her three-year-old contemporary brand, Joyann, in 2007 in favor of staying home with her newborn son. At the time, Joyann was being sold in about 500 stores worldwide including Bergdorf Goodman, Henri Bendel and Bloomingdale’s.

“My dad asked me to come on board for one month,” Joyce said while she was visiting the brand’s New York offices several weeks ago from Los Angeles, where she is based. “Of course I think he said that knowing I would decide to stay on.”

Today, Joyce is the brand’s creative director, but she also oversees marketing and development for the label’s product mix. Her first collection is shipping to stores now, but for spring, the line will have even more of her influence.

“Coming in, I felt that the line was getting a little bit too casual, so I wanted to dress it up a bit and add an edge,” she said walking through the collection, pointing out some of the label’s key items — printed silk tops, fitted black pants, T-shirts with fringe details, motorcycle jackets, chunky cardigans and a huge assortment of party dresses. It’s the most fashion-forward items, she said, which have been the best booking items. The collection wholesales from $14 to $70, while the BCBG Max Azria brand wholesales from $48 to $250. BCBGeneration, which first launched for fall 2008, is sold in department stores such as Macy’s and Bloomingdale’s, as well as select specialty stores nationwide including Nordstrom.

“I like to think of Generation as the little sister to BCBG and it’s priced very well, so it’s not a huge investment for the customer to purchase a trendier item,” she said.

Going forward, the Azrias have big plans for BCBGeneration. Strong believers in having their own retail locations for the company’s other brands — there are currently 550 BCBG Max Azria stores, a few Max Azria stores and a growing number of Hervé Léger by Max Azria stores planned globally — executives plan to open seven freestanding BCBGeneration stores beginning in spring 2010 in Los Angeles, New York, Las Vegas, Chicago and Seattle, as well as in to be determined cities in Florida and Texas.

“As we continue to add new categories, our clients will be able to enjoy our magnetic lifestyle approach,” Joyce said of the newly planned store openings. “Creating an environment where our client feels emotionally connected, playful, joyous and filled with beauty is unique in a freestanding store environment. I have so much fun creating our product and want our client to feel the same energy while she shops it.”

The Azrias declined to divulge volume expectations for the BCBGeneration brand.