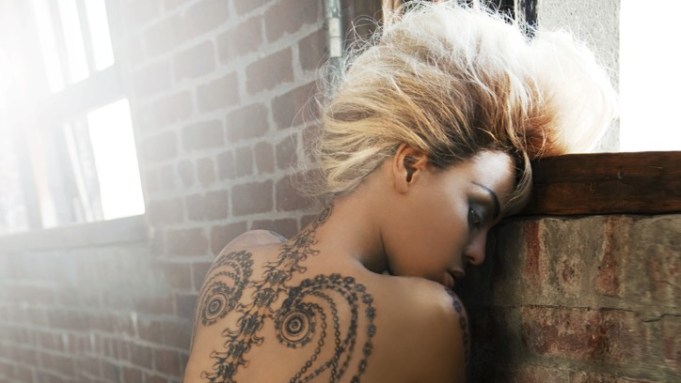 Beyoncé Knowles and Tina Knowles and their licensing arm, Beyond Productions LLC, are teaming up with airbrush makeup firm Temptu to create a limited edition collection of temporary tattoos under the Deréon label.

“With a Sixties-pinup-girl meets-futuristic-biker-chick theme, Beyoncé and I really wanted to give our Deréon fall 2010 campaign a tough edginess,” said Tina Knowles, Deréon’s founder, creative director and designer. “We decided to invite Temptu to help us create custom body art for her to model with our fashions. The resulting images were so strong that we realized consumers might want to re-create the tattoos themselves.” The tattoos are due on Nov. 1, and are available in both deluxe and basic packages. Designs include Deréon’s signature fleur icon, rocker bolts and chains, jewel baubles and spider designs. All are waterproof and designed to last for two to five days.

The basic kits contain eight temporary tattoo transfer sheets with two each of the four designs; 10 tattoo application pads and one of three kit designs, each featuring a different image of Beyoncé, shot for the fall/winter Deréon ad campaign. The deluxe edition includes everything in the basic kit, as well as a signed photo of Beyoncé and a chance to win a trip to New York for a photo shoot.