Beyond Beauty Raises 1.8M for OCD 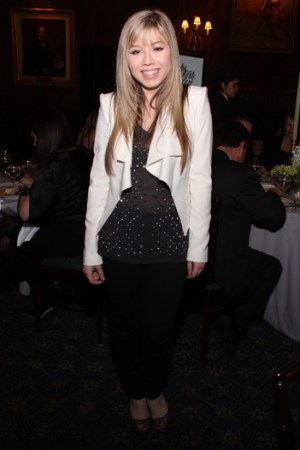 Several weeks prior to Tuesday night’s seventh annual Beyond Beauty dinner to support the foundation, $275,000 had been raised but a last-minute $10,000 came in, and a personal appearance Monday by 18-year-old actress-singer Jennette McCurdy at Lord & Taylor that attracted a crowd of 150 added an additional $3,500.

Finally, funds raised at the dinner itself pushed the total take for this year to $290,000, money that’s earmarked for OCD research.

In fact, Dr. Gerald Nestadt, director of the OCD Clinic at Johns Hopkins Medicine and principal investigator of genetic research, received an oversize check representing the funds. He said “several studies of novel genes” have uncovered a gene that interacts with neurological receptors, a significant aspect of the development of OCD.

“It’s probably the most robust finding we have to date,” he told a crowd of 230 executives.

Aside from McCurdy, another notable at the gala was Morgan Fairchild, who was the evening’s emcee. Taking home honors were Cosimo Policastro, executive vice president of fine fragrance for North America at Givaudan, and Nancy Berger Cardone, vice president and publisher of Marie Claire.

Linda Marshall, whose son James died in 2002 of an eating disorder associated with the disease, is secretary of the foundation and president and owner of Elysée Scientific Cosmetics.

“Linda Marshall and her family epitomize what family means,” Policastro said prior to taking the stage. “They’ve taken that and made it into a strength. She’s an inspiration for all of us.”

Said Marshall, “Cosimo and Givaudan have been supporters from Day One. He’s someone who wants to make a difference.

“Celebrities are starting to bring recognition [to OCD],” Marshall added, noting she had met Jennifer Love Hewitt, who told her she’d like to get involved with the foundation as a result of her own OCD.

Fairchild remarked that the organization has “taken a great tragedy and turned it into something to help others.” Of Hollywood’s nascent involvement with the foundation, Fairchild said there were more disorders in Tinseltown than substance abuse. “It’s Hollywood, but it ain’t all drugs,” she deadpanned. “It’s OCD, it’s AIDS…”

For her part, Cardone said Policastro and she “have bonded by one person — Linda Marshall.” She had an anecdote about Marshall taking a taxi ride to meet her, only to realize Marshall had forgotten her wallet. The driver told her to put the fare toward the foundation.

“I look at Linda with admiration and compassion,” said Cardone.

The festivities wrapped with a four-song send-off by McCurdy, a Californian, who is also Marshall’s cousin.