The brand has unveiled a new product line as well. 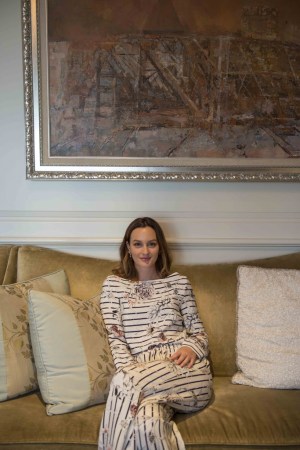 SHANGHAI — As a testament to the growing importance of Asia — in particular, China — for Biotherm, the L’Oréal-owned brand unveiled a new product line as well as introduced its new global brand ambassador, actress Leighton Meester, to an audience of mainly Chinese media and VIPs on Thursday evening here.

Meester joined Patrick Kullenberg, general manager of Biotherm International, and other L’Oréal executives for an event in an art gallery on Shanghai’s historic Bund waterfront to unveil her new campaign with the beauty brand. It was the actress’ second trip to Shanghai. Last year, she attended an event hosted by luxury jeweler Harry Winston.

The central reason for the launch in China “is that the epicenter of the brand has shifted in the last 20 years,” Kullenberg said. “China, in the last two years, has become our number-one market, which was not the case just three or five years ago. It is our number-one country, so it felt right to do our international event here in Shanghai.”

Sales to Chinese consumers, both domestically and overseas, make up roughly 20 percent of Biotherm’s global business, the executive said. The brand is having about 15 percent year-on-year growth, which is in line with the overall growth of the cosmetics market, he said. “When we look at our like-for-like growth, excluding new openings and stores, we are outpacing the market,” Kullenberg said. “I think the Biotherm brand resonates with the Chinese consumer.”

Kullenberg said Biotherm selected Meester as its global brand ambassador because she “is very much in line with our values as a more natural brand.” Meester will first appear in the brand’s campaigns for face-care products, including Aquasource, starting early in 2014.

“She has this glow about her,” Kullenberg said. “We wanted to have one person who was legitimate with our desire to recruit younger customers to the brand. We wanted to move away from just models to people who have real stories and something to say — more texture and more depth to them.”

The executive added: “One of the ways we see of recruiting new customers to the brand is to be a brand that speaks to post-Eighties and post-Nineties consumers.”

Whether calculated or not, the selection of Meester is also strategic for China. The actress is overwhelmingly popular among young women here, primarily for her role as Blair Waldorf in “Gossip Girl.” During the Harry Winston event in 2012, so many fans showed up to see the actress that police threatened to shut it down.

Meester said during an interview on Thursday afternoon in the Waldorf Astoria on the Bund that she was not aware of her popularity in China, mainly because she has been unable to talk to Chinese on Twitter, which is banned on the Mainland. “I have never spoken to people over Twitter from China,” she said. “I get to speak to someone in Argentina or Israel, but I never speak to people from here. It is insular. It is really interesting. It is actually kind of nutty, but we won’t talk about that.”

As for her experience as a brand ambassador, Meester said it starkly contrasts with her work as an actress. “It is so opposite of what I am used to,” she said. “It is more technical, whereas I am very emotional and there is really not a lot of room for that. But it is fun. I get to travel, meet new people and be personal with people, and the fact that I actually like the brand is really wonderful.”

Meester’s selection also perhaps reflects a more concerted effort to reach female consumers in China and the region. China represents the second-largest market for Biotherm’s skin-care products for men behind Korea, Kullenberg said, adding that Biotherm has had particular success in China with its high-end men’s skin-care line, Biotherm Homme.

Thursday’s event placed emphasis on skin care for women. Biotherm unveiled Liquid White, a line of whitening products that are popular in Asia, particularly among females. Liquid White Spot Focus, one of the flagship products, alleviates dark spots using extracts from white lotus and Palmaria P., a red alga. UV Supreme, another featured product, defends against pollution and so-called long ultraviolet rays, which are the most damaging to skin. The whitening range will be released in Asia in February as well as international travel retail locations where there is a high prevalence of Asian consumers, Kullenberg said.

“We have a global strategy on Aquasource and Blue Therapy, and then a regional strategy with opportunities like whitening in Asia and that sort of instant gratification of skin perfection for Western women,” Kullenberg said.

Last year, Biotherm launched its Blue Therapy antiaging line as part of a new “Beauty from the Deep” re-branding campaign aimed at communicating to consumers the more than 60-year-old brand’s connection to water via the sourcing of ingredients from oceans, lakes and springs. Blue Therapy represents 20 percent of Biotherm’s total sales in China. In Europe, it has achieved a 5 percent market share, which, according to Kullenberg, “is the best-ever result for an antiaging range.”

The brand is also embracing digital to reach younger consumers. In 2012, Biotherm revamped its Internet sites. In China, the brand produced a digital film with Peng, its Asia brand ambassador, instead of opting for a television campaign. Also in China, the brand launched a Biotherm Life Internet platform where consumers can learn about products and also receive health and beauty tips.

“It is something that is becoming more important for the brand,” Kullenberg said. “We see that our sales, though small still in e-commerce, are accelerating and far outpacing the classic business model.” The executive added that he sees e-commerce as a particularly important channel for male consumers who would prefer to buy skin-care products in a more discreet environment rather than a “more feminine” department store.

In 2012, Biotherm focused heavily on product innovations and now will shift strategy to communicating a new image of the brand, especially to women. “We have installed the level of expertise, and now we want to focus as well on the image of the Biotherm woman,” Kullenberg said, “to ensure that we make the brand as desirable and appealing as possible and speaking to women’s concerns.”