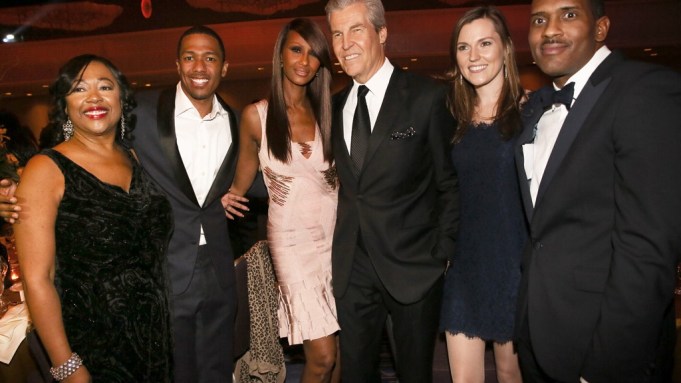 The organization raised its profile by recognizing three industry success stories, and a record amount for student scholarships. Macy’s chairman, president and chief executive officer Terry J. Lundgren, as well as Iman and Alain LaFontant, vice president of business development at Sean John, were the honorees at the black-tie gala at the Marriott Marquis. The 600 guests generated $1 million, which was almost twice the amount raised at the 2012 event. Also, 67 scholarships were distributed, compared with 30 last year.

“Terry and Macy’s have been such true supporters for BRAG and advocates of diversity and inclusion for a very long time,” said Gail Monroe-Perry, BRAG’s president. “Iman was the very first one to address the makeup needs and beauty issues of women of color. She has turned that into a wonderful business, and she is a big campaigner for women and children’s issues.” Iman, 58, is ceo and founder of Iman Cosmetics, Skincare and Fragrances.

“With Alain, this is a special tribute recognizing a past intern in our program,” which opened the door to a career, Monroe-Perry noted. He was an intern in 1996 at Bloomingdale’s, in men’s briefs, and not long after, he landed a job at the store in planning and men’s underwear.

“We have many former BRAG interns that are working for Macy’s or Bloomingdale’s,” Lundgren said. His advice to those interning or starting a new job: “Jump in with both feet. Just learn that job and do it better than anyone else.”

Iman said she got into business because women of color at that time needed to be told they were beautiful. “Women of all tones want to look good — when they rule the world.”

The nonprofit BRAG is run primarily by volunteers, including its top volunteer, Monroe-Perry, and the BRAG board. Monroe-Perry said she’s building the infrastructure and broadening the mission. “BRAG is one of the best-kept secrets out there,” she said. “Some people of color have never heard of us. One of my short- and long-term goals is to change that. It means creating a marketing plan to keep us in the forefront.”

Things are in motion, with BRAG hiring for the first time an operations manager and assistant, as well as a public relations firm and event planner for the gala this year. An executive director is on Monroe-Perry’s wish list. “We would also like to expand beyond our traditional reach. We need to look more at consumer products, hospitality and technology” beyond BRAG’s concentration in retailing and fashion.

The organization promotes the advancement of people of color through student scholarships, 10-week summer internships, college chapters, an executive development program and mentoring. Monroe-Perry said that BRAG practices what it preaches — diversity and inclusion — and she noted that Asians and Latinos participate in the program.

Asked if the retail/fashion industry has become more diverse and inclusive since the inception of BRAG in 1975, Monroe-Perry responded, “It’s sort of a double-edged sword. Everyone has read the numbers on how the demographics are absolutely changing. The smart businesses are those that are reflective of their client base. Some people are being placed in prominent positions, though overall, there appeared to be more merchants, more buyers, more planners, more black models in the past, as opposed to today. I think that with important bottom-line, money-making positions, we have a few at the top. But there’s not enough succession planning and grooming.”

“Diversity is still an issue existing in the fashion industry, and it’s not only about color. There are still issues of gender,” observed LaFontant. “The industry is sustained by its differences, which should be celebrated.”