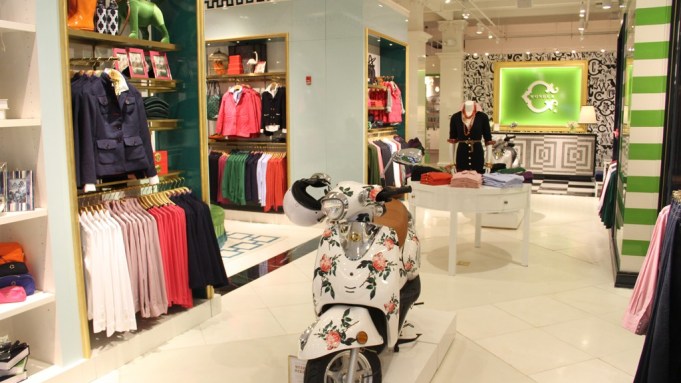 “I’m going to launch one retail concept after the other,” said Burch, displaying some of the restlessness that manifested itself as Attention Deficit Disorder when he was a child.

On Saturday, Burch, 58, will unveil the 5,000-square-foot C. Wonder store at 72 Spring Street in SoHo, the latest in a series of planned retail projects from his venture capital firm, J. Christopher Capital LLC. He’s mainly been known in fashion circles as the ex-husband of Tory Burch and one of the driving forces in her brand’s success. After spending years in the background at Tory Burch as an investor and co-chairman of the board, he is now stepping firmly into the spotlight with a string of high-profile ventures that could, if they all work, establish him as a major force in retailing with up to 1,000 stores nationwide.

Burch has plenty of concepts up his sleeve. In fact, he’s developing at least four other ideas that would launch from next spring into mid-2013 and range from mass to the very high-end.

The opening of C. Wonder follows the launch of the fashion brand Monika Chiang, designed by his girlfriend, which opened its first store earlier this month on Robertson Boulevard in Los Angeles. A “preview” shop will bow in early November at 136 Prince Street between Wooster Street and West Broadway. The permanent store is slated to open early next year, around the corner, on Wooster. The brand will ultimately have 150 stores, Burch said. He has said he plans to invest $15 million to $20 million in the brand over the next four to five years.

Then there’s Electric Love Army, a sportswear line and related boutiques that Burch developed with downtown public relations woman Kelly Cutrone. With an initial investment north of $5 million, the company will open the first of several freestanding stores in 2012. “It’s a look back to the Seventies when everybody was wild and crazy,” Burch said of the line.

“I get really excited about new ideas,” said Burch, who gave his two older daughters, Pookie and Louisa, carte blanche to develop their own brand. “It’s priced similar to Uniqlo but it’s got twists of uniqueness. It will be simple, sophisticated clothes that are a mix of high European style and Americana sportswear, stylish clothes with a utilitarian edge. I’m providing a little bit of adult supervision. It’s their business and vision.”

The as-yet-unnamed concept will launch in fall 2012.

No. 9 Christopher is a concept Burch has been nurturing for six years. The 50,000-square-foot store will feature “the most elegant furniture you’ll ever see,” he said. “You’ll be able to order a custom kitchen and custom library. It’s a comprehensive style that touches every detail of a well-lived life. There isn’t a category that will not be addressed.”

Burch has set the launch for 18 months from now.

There’s also Poppin, an online store devoted to colorful office supplies. Sources said Google was so impressed with the initial products that it ordered all of them for its offices worldwide. “We did beta and are doing our major launch in seven months,” Burch said.

And these are only his retail projects — he has plenty of others on the go, including several in real estate and construction.

Now there’s C. Wonder, for which Burch has high expectations. Offering affordable products in an upscale environment with a high level of service, three more C. Wonder stores with 5,000 square feet of space each will bow in mid-November at Westfield Garden State Plaza mall in Paramus, N.J., The Westchester Mall in White Plains, N.Y., and the Roosevelt Field Mall in Garden City, N.Y. Burch envisions 300 stores worldwide, with 25 to 50 units opening next year, including some possibly overseas. “We want to be extraordinarily special,” Burch said. “There will only be 140 stores in the U.S.”

Burch alluded to a concept that will be launched in two years and will have many more stores than C. Wonder, but declined to discuss it further.

As fascinated with sourcing and technology as he is by product, Burch is test-driving many of his retail ideas at C. Wonder. It’s one of the first stores with totally integrated radio-frequency identification (RFID) and point of sale technology. “We know when a person’s picked up a sweater and when they put it down,” he said. “We can follow a customer through the store. We know when to replenish. We know everything about you. There’s sensors all over the store. We looked at the industry and saw big lines in stores. We didn’t want that.”

He doesn’t think he’ll sell the system, but it could be of use to the industry because “they can see that it actually works. For me, it’s exciting.” Burch is clearly turned on by technology. “I put up all the capital for Powermat, a wireless battery charger. I’m working on all this new technology.

“I’m inspired by change and evolution and revolution,” he added. “People come to me with cool s–t.”

Burch is always looking for that diamond in the rough, and is willing to throw in a few million dollars here and there to get an idea off the ground in hopes that it turns into a hit. He met Cutrone on the street and after talking with her told her he’d back her own fashion line. People who have worked with him say such impulsiveness is both a strength and a weakness — but they admire his willingness to take a chance in an era when caution rules the landscape, and praise his creativity, enthusiasm and energy. Sometimes, that enthusiasm gets the better of him. Not unlike many high-powered executives, Burch’s temper has been known to flare up, resulting in a torrent of expletives.

“I’m leaving for Asia on Saturday for two weeks,” he said. “I’ll walk one million square feet of trade shows. I’m bringing 50 people. I go to factories that are way off the beaten path. I’ll find these shows that no one goes to. I’ll say, ‘How do we work together?’ I bring them an iPod as a gift.”

Burch will be looking for that one product that stands apart from the rest or the one partner he can see eye to eye with. “I start from a sourcing perspective first,” he said. “At shows, something will hit me.”

Amy Schecter, president of C. Wonder, confirmed her boss’ painstaking approach to sourcing. “We drove to factories surrounded by rice paddies that were seven or eight hours outside Shanghai or Beijing or Hong Kong. We saw 150 factories. Chris is in China almost every month.”

Burch used this approach when he started his first business, Eagle’s Eye, as a student at Ithaca College, where he sold sweaters door-to-door. “I spent 20 years on Eagle’s Eye,” he said. “It got up to $120 million in sales. We had stores and outlet stores and wholesale accounts. The apparel at C. Wonder is from what I did back then. I reinterpreted it. We took the Eagle’s Eye merchandise I did in the Seventies and tweaked it and put it back on the floor.”

Only 6 percent of C. Wonder’s assortment is apparel. It’s preppy and classic. A fake fur vest is $149, a cable crewneck sweater with gold buttons, $78, and a quilted jacket with “C” pattern lining, $128.

C. Wonder’s dominant color is apple green, which shows up on floors, striped walls, sofas and two huge front doors with gold “Cs.” The store is divided into rooms with names such as Palm Springs, Hollywood Regency and Aspen. C. Wonder demonstrates Burch’s approach to retailing with a wide variety of merchandise across many categories. Besides apparel, handbags and jewelry, there are reading glasses — he couldn’t abide by the ugly drugstore readers. The large home area includes everything from dishes and glassware to pillows and picture frames. Burch thinks his customers are dog people, so there’s a section devoted to bowls and leashes. The odd “wow” items include a bicycle with leather seats available in blue, purple, green or pink, $249; motorized scooters, and motorized skateboards.

A soft opening exceeded Burch’s wildest expectations. He said he’s committed to making the shopping experience more enjoyable. Returns will be easy, no questions asked. “How can we make women comfortable?” he wonders, especially in the dressing room, that dreaded “black hole.” Burch’s answer is a device that lets shoppers select the type of music they want to hear, adjust the lighting and call a sales associate. He obsessed about the cleanliness of the bathroom, saying he knows that women squat, but hopes that at C. Wonder they’ll be inclined to sit down.

According to employees, Burch is not a micromanager, but he’s very involved. “He loves to roll up his sleeves and be a part of it,” said one staffer. “The company is very entrepreneurial. He allows employees to own their areas and make a mistake and take risks. He funded other people’s brands and now he’s doing his own thing.”

Asked about the other company he helped fund, and rumors that he is looking to exit Tory Burch, Burch declined to discuss his stake in the company. He did say, “My role has been limited to board meetings and an emotional [connection] and wishing them well. I was fortunate to be involved in the beginning. I’ve done other things and I’ve always remained in the background. It’s Tory’s business. I’m so proud of Tory and the company and [Tory Burch president] Brigitte Kleine. The vision Tory provided, I’m in awe of.”

Now it’s his multiple visions — and they’re at five and counting.