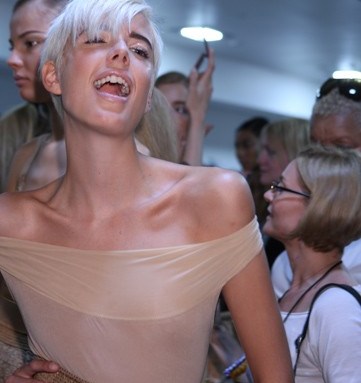 Some of this season’s most in-demand models walked enough catwalks to turn their stilettos into flats. In fact, some agents even began curbing the number of shows their clients could book. But with nothing more than the designer frocks on their backs, the Eight girls listed below were supernovas in their own right.

Name: Agyness Deyn
Hometown: Littleborough, England
Age: 24
Shows booked: 30 (opened: four, closed: six)
“It was great having my parents backstage with me during New York Fashion Week. My mum became mates with all the backstage photographers. She was taking pictures of them.
It was really funny.”

Name: Suvi Koponen
Hometown: Vantaa, Finland
Age: 19
Shows booked: 65 (opened: seven, closed: seven)
“I love the shows, but my favorite moment was the day after when I could get up at 9 a.m. instead of 5 a.m.”

Name: Olga Sherer
Hometown: Minsk, Belarus
Age: 20
Shows booked: 53 (opened: five, closed: eight)
“I was exhausted after the New York shows, but the designers in London were so great to work with, it made me really excited to be on their catwalks.”