The former chairman and ceo of Neiman Marcus Group is raising his industry profile again to tackle some big overseas projects. 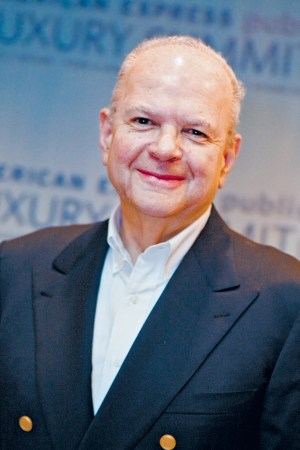 “I am going to be on the board and will be working on a limited extent on a project-by-project basis,” said Tansky, who since March 2011 has been a senior adviser at the company.

Marvin Traub Associates’ founder Marvin Traub, the former Bloomingdale’s chairman and chief executive officer, died in July. The organizational changes disclosed to WWD were portrayed by officials as part of succession and strategic planning triggered by Traub three years ago, along with Mortimer Singer, Traub president and ceo, to guide the company’s future growth, rather than as directly due to Traub’s death.

“To Marvin’s credit, he created the brand and the business foundation which has enabled us to flourish,” said Singer. “His handwriting is on everything we do.”

Among other changes at the company, it is re-branding itself under a new logo that simply says Traub, and Susan Kronick, a former vice chairman of Macy’s Inc., longtime Bloomingdale’s executive and highly regarded retail operator, has joined the firm as an operating partner. Considered a business development and consulting firm, Traub has more than 30 operating partners, including Ken Rood, Laura Hall, Helaine Suval, Stanley Tucker and Ken Walker. They’re tapped on an assignment basis for their expertise in distribution, franchising, licensing, real estate and consumer goods.

“The company is a business development agency,” structured with “in-house deal teams working with best-in-class operating partners,” Singer said. “The company was established on the core belief of two concepts: global and brand.” There is currently no chairman.

Tansky, in his retired state, does wear a few hats. He continues as the non-executive chairman of the Neiman Marcus Group, after retiring as chairman and ceo of the luxury chain in October 2010. He is also on the boards of Donald Pliner and Howard Hughes Corp.

Tansky cited three Traub projects he’s working on, including helping to launch at the end of June an upscale, 8,000-square-foot women’s store called Luminance in Johannesburg. Luminance is owned by Khanyi Dhlomo, a media mogul and one of Africa’s most successful women. The plan is to roll it out in South Africa.

Tansky is helping the U.K.-based Value Retail, operator of nine high-end outlet “villages” in Europe, to develop a 600,000-square-foot outlet center in Suzhou, China, which is 50 miles west of Shanghai. The center, called Suzhou Village, will be opening in three phases beginning in the first quarter of 2014. Tansky said he was “not overly impressed” with the level of outlet center competition that exists in China and that Value Retail will bring its European model to the market, more specifically, the company’s successful Bicester Village, 65 miles northwest of London, which attracts a large number of Chinese tourists.

Tansky, along with Singer and Traub vice president Kelsey Scroggins, is also involved with The Galleria, a 355,000-square-foot luxury shopping and dining development with a waterfront promenade at Sowwah Square, a mixed-use development on Al Maryah Island in Abu Dhabi. The Galleria is expected to open in August.

Sowwah Square connects with Sowwah Central, a larger shopping center, which is expected to have two anchor stores. The Traub group works with Gulf Related, the Mideast unit of Related Urban, in its development of both The Galleria and Sowwah Central. Mubadala Real Estate & Hospitality, an arm of the Abu Dhabi government, is a partner in The Galleria.

Traub Associates has been bringing global brands to clients in the Middle East for the past 12 years, and counts among its clients the Al Tayer Group, an important Middle East retailer. Other clients include Brooks Brothers, DCI Corp./Von Follies by Dita Von Teese, International Textile Group/Cone Denim, Moleskine and numerous private equity firms.

Despite the loss of Traub, West said MTA had accelerated growth in 2012. “As we look ahead with newly added talent across the firm, we are confident that the progression will continue,” he said.

Lurie described his role at the firm as “a roving board member” to different companies to help them maximize their assets and assist on turnarounds. “I am delighted to bring to bear my experience gained from years of dealing with troubled companies, with the exciting world of emerging and growth companies that Traub is so well known for working with,” said Lurie. “Lessons learned from bumps and bruises are invaluable tools as you build your brand.”