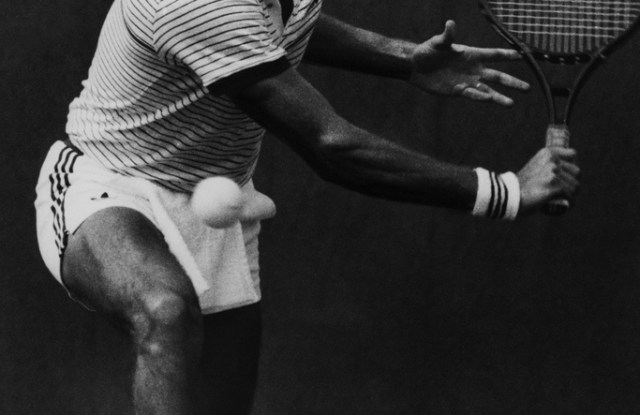 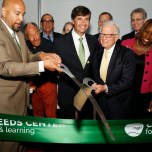 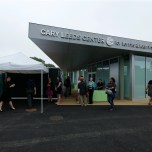 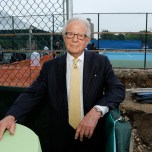 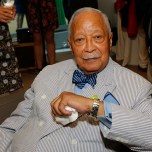 They were among the hundreds of supporters from the worlds of tennis, fashion, government and civic engagement who gathered at the new facility, which has been 15 years in the making. The creation of the $26.5 million center is a public-private partnership, with $16.5 million of public funding, and the remainder from private donors, spearheaded by project campaign co-chairs Leeds and Tory Kiam.

The facility is a tribute to Leeds’ late son Cary, a star on the Yale University tennis team who went on to become a world-ranked player, ranking No. 12 in doubles and competing in six U.S. Open and five Wimbledon tournaments, where in 1981 he reached the semifinals in mixed doubles. After retiring from tennis, Leeds attended business school and then co-founded a software company, while continuing to teach tennis. He died in 2003 at age 45.

“Cary Leeds loved teaching the sport, especially to young players,” said Leeds. “As a place where children of all backgrounds will access tennis and educational opportunities, the center will be a fitting memorial to Cary’s life and will make the world a better place, because he was here.”

The center was designed and constructed by Gluck+, in collaboration with the New York City Department of Parks & Recreation. It houses a two-story, 12,000-square-foot clubhouse and educational facility, with two exhibition courts and 20 outdoor courts, 10 of which will be indoors seasonally under air structures. The center, located in the 127-acre Crotona Park, will serve children in one of the poorest Congressional districts in the U.S. It will offer more than 6,000 free court hours for community use and provide space for teachers to help young people improve their school performance.

“I love it,” said Dinkins, whose name is attached to Court No. 1. “This particular effort is 10 years in the making, and now it’s here. There are 10 schools on the perimeter of the park and others within walking distance. Thirty-thousand kids will have access to it. The beauty of this particular effort is some kids will obtain a degree of proficiency in tennis and will become world-class players like John McEnroe and the Williams sisters, and some will get good enough to get a college scholarship. But tens of thousands will become better people through these efforts,” Dinkins told WWD.

During the ceremony, Deborah Antoine, president and chief executive officer of New York Junior Tennis & Learning, attributed the center to Skip Hartman, founder of the NYJTL. “Without Skip and his relentless effort and undying passion for kids and tennis, this center would have never happened,” said Antoine.

Díaz said, “Welcome to God’s country, the borough of the Bronx. Many of you are not from here. …Here in the Bronx, God’s work is being done every day. Look at the faces of the children in the borough,” he said, referring to the young tennis players on the podium.

“Larry Leeds had a dream with his wife to honor their son in the correct way and this center is nothing short of phenomenal,” said Díaz. “We did not cut corners. This center could be anywhere in the world, but it’s right here in the boogie down Bronx.” The center “is more than just tennis, it is cerebral. It’s an academic exercise as well. It will make sure our kids are reading and prepared to take control of the city of New York. The center means everything to me and the Bronx, and it will be another economic engine,” said Díaz, noting tourism will continue to increase in the borough.

Leeds, who got a standing ovation, said, “We’re proud to see Cary memorialized. Thousands of young boys and girls will have a more successful and fulfilling life.” Leeds thanked Chirico, chief executive officer of PVH Corp., a Bronx native, for his financial donation as well as donating thousands of Izod shirts, and William Ackman, founder and ceo of Pershing Square Capital Management LP, for donating $1 million to the project. “It was an extraordinary example of philanthropy from the heart,” he said.

Bollettieri, one of the most influential people in the world of tennis and the founder of the Nick Bollettieri Tennis Academy, added, “This center will give children an opportunity to develop athletic and academic skills. They will build a word called ‘character’ and can say, ‘My character is not for sale.’”

Finally, Hartman thanked Dinkins, his close friend and tennis partner for 40 years. “When your tennis partner is mayor, it’s much easier to approach people for money,” said Hartman. He also thanked Kiam and Leeds. “They did the lifting and brought in $11 million in donations so this facility can operate debt-free.”

The center is also expected to serve as a place for young tennis players to network. “The young people from every income strata will compete against each other and will form relationships with each other, which will open doors for the rest of their lives,” said Hartman.