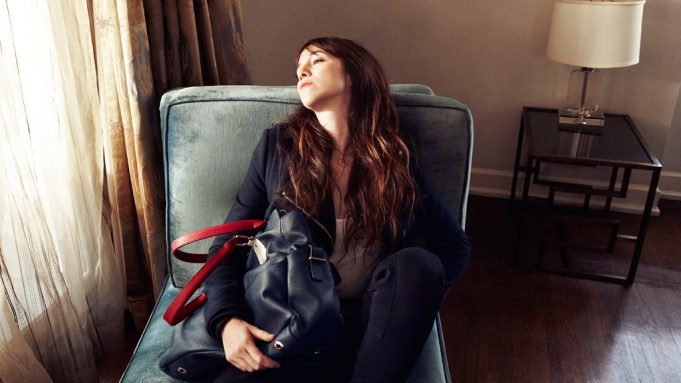 Charlotte Gainsbourg is in the mood to play.

The French actress and singer recently completed her third film with controversial director Lars von Trier, and she is keen to keep pushing her boundaries.

“I feel like dabbling in a bit of everything, whereas before I was more cautious. I used to think there are areas where you can’t improvise. Today, on the other hand, I don’t see why you can’t try your hand at several things,” says Gainsbourg, sitting on a sofa in Tommy Hilfiger’s Paris showroom.

Her train of thought is partly inspired by shooting the advertising campaign for Hilfiger’s handbag to raise awareness and funds for nonprofit organization Breast Health International. Gainsbourg posed for fellow actress Drew Barrymore, who lensed the images at the Chateau Marmont hotel in Los Angeles.

“When I saw her trying her hand at photography, it wasn’t that I thought, Oh, why not me? But I’ve been asked in the past if I would be open to that, and now I’m thinking, Well, yes, why not?” Gainsbourg says. “And directing is not something I think I’m capable of, but it’s on my mind. Maybe I’ll never do it, but I’m thinking about it. It’s no longer something I refuse to even look at,” she adds.

It’s tempting to think of this as the next phase in a cycle that began when Gainsbourg was rushed to a hospital in 2007 with a brain hemorrhage. Though she made a full recovery, she titled her following album “IRM,” the French abbreviation for MRI, and exorcised her fear of death with a no-holds-barred performance in von Trier’s “Antichrist,” which won her the best actress award at the Cannes Film Festival.

Now 41, Gainsbourg credits the experience with giving her more understanding for women facing an illness like breast cancer — including some in her inner circle. For BHI founding chairwoman Shelley Schwartz, the campaign with Hilfiger, now in its sixth year, is a godsend.

“Breast Health International would never be able to afford to buy an ad in a magazine. It would be a foolish, impossible thing. So it puts the word out,” she said.

Priced at $298, this year’s handbag, a navy leather tote with white accents and red handles, is available in a limited edition of 2,000, with $100 from every sale going to the BHI Fund for Living program, which helps cancer patients with practical concerns like child care and transport. The bag has sold out on the company’s Web site, tommy.com, and is fast flying off shelves in the brand’s stores in Europe, the U.S., Canada and the Asia-Pacific region. Tommy Hilfiger celebrated the success of the launch with a dinner attended by Gainsbourg at Caviar Kaspia in Paris last week.

Since her own brush with mortality, Gainsbourg has not stopped testing herself, finally working up the courage to perform her songs in front of a live audience and making increasingly daring film choices. In von Trier’s upcoming “Nymphomaniac,” she plays the title role. Though rumors that the movie will feature real sex scenes are false, it has other disturbing facets — including the fact that Gainsbourg’s character bears the same name as her daughter Joe, born last year.

“It’s a total coincidence, and I wanted him to change it. I didn’t want that link,” says the actress, who nonetheless lost that battle.

Despite von Trier’s reputation for being tough on female actors, and the comments about Nazis that got him barred from the Cannes festival last year, Gainsbourg is unswervingly loyal to the director.

“I adore him as a human being, I really trust him and I enjoy being reunited with him. I don’t know him intimately, he’s not my best friend and we don’t call each other every week, but I feel — and this may be one-sided — I feel very close to him, and I enjoy putting myself in his hands,” she says.

Though Gainsbourg has starred in everything from popular French comedies to gritty art-house fare, she admits to a penchant for the dark parts. “With my laid-back personality, I need roles that jolt me awake,” she laughs.

Indeed, it would have been easy for Gainsbourg, the daughter of musician Serge Gainsbourg and actress-singer Jane Birkin, to coast through life on their genetic coattails. Instead, her heritage has fueled her desire to carve out her own niche.

“There have been times when I’ve found it hard to deal with,” she says. “Sometimes I’m aware of how often people bring up my parents — it’s constant. But I’ve also noticed that if the subject doesn’t come up — especially in interviews — then I’ll start talking about it, as if omitting them is somehow wrong or bizarre. Yet it bothers me.”

Her 15-year-old son, Ben, serves as a potent reminder that it can be hard to escape your parents’ shadow.

“My son is not straightlaced — he’s very tortured. We haven’t produced classic children. I would have liked to provide them with a very solid structure, but that’s not part of who I am. I’m not solid,” she says.

“As much as I would love for my son to be a doctor, I think that when you see around you a photographer, a singer, an actress, it makes you want to follow in their footsteps, because you also see how much fun it is.”