The indie bath and body line is USDA-certified organic and has been sold at Whole Foods since April. 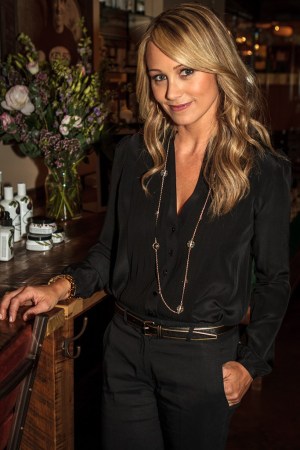 Blonde, beautiful and wife to one of Hollywood’s hottest funny men, Christine Taylor has found a new interest. She is now the first face of Indie-brand Nourish, a USDA-certified organic skin care line sold since April at Whole Foods.

“I’m fascinated by the beauty industry,” said Taylor, who added that she personally sampled each product in the line before accepting her new gig. “It was the most fun week, planting the products in all our bathrooms getting the whole family to try them. I would never sign on to something I didn’t use or didn’t believe in.”

Taylor, who lives in New York with her family, said some of her favorites in the collection include the Organic Body Butter in Fresh Fig, also her preferred scent within the range.

The mom of two and self-proclaimed “beauty girl,” and health enthusiast, said her appointment as brand ambassador for the bath and body line, came at a fortuitous time in her life.

“I had taken some time off to be a mom [to son, Quinlin, seven, and daughter, Ella, 10], but now that my kids are in school full time I think it may be time to get the creative juices flowing again,” said Taylor, also spokesperson for the United States Tennis Association and a founder (along with husband Ben Stiller) of The Stiller Foundation, which provides relief and education for children in Haiti. For the past 12 years, Taylor has also been actively involved with Project A.L.S., which is dedicated to finding a cure for Lou Gehrig’s disease.

On the acting front, Taylor has been getting back into the swing of things. She recently starred in a film for Sundance called “The First Time” (which will be distributed by Sony Pictures later this year) and a Web series called “Burning Love” (which parodies reality TV dating shows), with her husband.

Known for her roles in movies like “Zoolander,” “The Brady Bunch Movie” and “The Wedding Singer,” Taylor reminisced during a call with WWD about her days on Nickelodeon’s “Hey Dude,” her first real role on television.

“It was before cable was big, so it was a big part of my life and no one knows about it,” said Taylor, who was 17 at the time of filming. “In the first season David Lascher (who played on-and-off love interest, Ted, on the show) and I dated offscreen. It was uncomfortable. We didn’t know how to deal with it,” she laughed. “We were kids.”

Nowadays, Taylor said her vegetarian family is focused on living an eco-friendly, healthy and active lifestyle.

“We’ve always been healthy eaters, we exercise,” said Taylor, who dabbled with veganism and said she found a personalized way to incorporate it into her life. “We need a few little treats in our life; I love my latte, Ben craves fish. Strict doesn’t work for us. We both found our own ways to adapt it.”

To that end, Taylor says Nourish is the perfect partner for her, because of its organic positioning and accessibility.

“I was amazed all Nourish products are under $10,” she said. “I support their mission of making healthy, organic products available to the mainstream and not just to those that can afford them.”

When it comes to beauty products, Taylor says her role with Nourish has helped her become more savvy as a consumer.

“I never looked at labels and now I do,” she said. “‘Ignorance is bliss’ only lasts so long and then you want to get educated.”

In her new role, Taylor will represent the brand during events, sharing her personal experiences living a “greener lifestyle” and will serve as the face of the Nourish product line.

“Christine Taylor is an ideal choice to represent the Nourish brand as our ambassador,” said Rick Ruffalo, chief executive officer and president of Sensible Organics Inc., the makers of Nourish. “She is authentic in her beliefs of living a greener, healthier lifestyle and as a busy mother of two young children, Christine can speak to her own personal journey of integrating better beauty, health and wellness solutions into her family’s lifestyle.”