Her focus is makeup, his is hair, but when it comes to beauty, Sonia Kashuk and Daniel Kaner share a common drive to succeed. 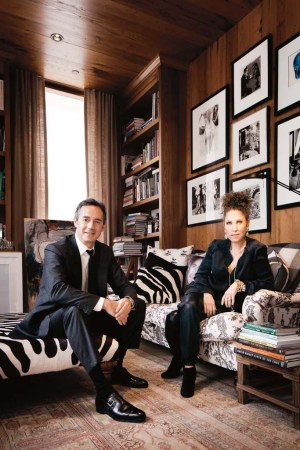 In the loft where Sonia Kashuk and Daniel Kaner live with their son, daughter and toy poodle, Miss Jezebel, every surface is artfully covered with art, photos, books and curios that the couple has amassed over the past 21 years. The objects reflect the shared passions of the couple, both Minnesota natives, and also help trace their route through the beauty industry, where each has made an indelible mark, Kashuk with her namesake cosmetics brand that she created 15 years ago in conjunction with Target Corporation; Kaner in the world of professional hair care, where he has been instrumental in building Aveda, Bumble and bumble and, now, Oribe Hair Care, which he founded in 2009. Here, the couple reflect on their incredible success and show their drive to thrive is stronger than ever.

Do you talk business together a lot?

DANIEL KANER: All the time. 24/7. Even in Connecticut, which is Sonia’s favorite house in the world, we walk for an hour, an hour-and-a-half, and 99 percent of the conversation is not looking at the beauty around us, it is talking business. We get it all out. What do you talk about?

SONIA KASHUK: All of it—issues, long-term goals, aspirations, things that are happening in the industry, things he’s heard or I’ve heard.

D.K.: It’s a private way to air things out, things that may be inappropriate to share with team members, but we keep each other’s confidence very well.

S.K.: Our personal and business are one. Someone said to me once if you can have your business be your hobby, that is pretty incredible. How would you describe Daniel as a businessman?

S.K.: Daniel has impeccable taste, which is why I’m always happy to have his insight and response and feedback. He has also taught me to hire up, hire people better than yourself.

RELATED STORY: In Pursuit of Vanilla >>

How would you describe Sonia?

D.K.: Sonia is a pioneer. I watched Sonia start with this idea, saying “I don’t want to be another prestige brand. This is what I want to do.” Then I watched Sonia go and meet Target Corporation.

Most people would say, “How can an individual without much business background formulate an idea, create a business plan, create a new stream of distribution and go and knock on a door and make it happen?” I watched that happen. I was always impressed with Sonia even before I married her. Even though she is 5 feet tall, I see heras6foot1.

Was there ever any question that it was the right direction?

S.K.: I didn’t have an alternative plan, to be honest. It was like, “I want to do this with Target,” and if Target hadn’t opened the doors to me, I’m not sure what I would have done. When I talk to people and they say, “How did you go after it?” my response is just don’t ever be afraid of getting a no. D.K.: You didn’t have a backup plan.

It was what it was. That’s what was so amazing about watching the journey. Sonia, when you launched 15 years ago, Daniel was building Bumble and bumble. What was your house like at that time?

D.K.: We are both very similar in that we work a lot. We are passionate, and we love what we do creatively. Even in our free time, we might be designing a garden, a house, exercising. We are in motion a lot of the time.

S.K.: We both live and are huge fans of design. We do our own homes. That is a giant playground for us. When I think about what I do, which is deal with color, shape and form, it is applicable to many different areas. Daniel and I have a similar aesthetic, which is lucky for both of us.

D.K.: We’d kill each other otherwise. It would be terrible. Sonia adds that little avant-garde [twist], that quirkiness. We’re in love with the idea of a personal perspective. A lot of people don’t have the guts to show something that might be not quite the mainstream, and Sonia so excels at that. Her first apartment in New York was a jungle of color. All of these things she had found on the street and all these tapestries. It was like you had gone into the tropics.

I don’t know if there were any flowers, but it just felt like this floral cave, with all this art. It was fantastic.

D.K.: I had this little house [in Minnesota]. It was kind of like a Swedish house, with wide-planked floors and lots of light. Sonia and I were starting to date at that point. She would come into town for shoots.

S.K.: I was consulting for Aveda, and that’s when I reconnected with Daniel.

S.K.: I brought Daniel into the beauty business, because at the time he was with a family scrap-metal business and Horst needed someone to get things going in New York, so Daniel started in the beauty business. I always tell him I’m responsible for his whole trajectory.

How do you creatively inspire each other?

S.K.: Daniel has great taste. I so admire his taste level that I feel when he gives me a seal of approval, I’m like, Great! It’s really important for me to have Daniel look at something and be like, Wow, that is really cool.

He is really honest with me. He is very grounded and very—I wouldn’t say I’m pessimistic, but he is always very optimistic. He sees something and he’ll go for it. When someone says, “What is your secret weapon?” It’s Daniel. He’s the lucky charm. I grew up in a conservative Midwestern family. We had five kids. He is much bigger in his scope in where he wants to go, where I’m a little bit like, I can’t believe my life. He is much more go for it. That helps balance me.

Daniel, were you always creative?

D.K.: I was an English major at university and I always thought I’d have my own department store. That’s what I wanted. Retail. I enjoyed that whole idea of display and beautiful goods.

S.K.: I had a display company. That’s what I did for a living when I was in high school and art school.

What’s your assessment of the beauty industry?

S.K.: Competitive. It’s big. You’ve got to have a strong sense of who your brand is and what it’s about and stay the course. In mass, when I first started, nobody paid attention to things like packaging—it was definitely like a second tier to prestige, whereas today the lines are a lot more blurred and most of the brands that I sell against, the national brands, are doing a phenomenal job. It is that much more competitive for me to stay aggressive and innovative and disruptive and to keep an eye very wide open, because there’s always missing pieces and room for a great idea. No matter how big and competitive the landscape is, there are definitely pockets of things that are missing.

D.K.: From my vantage point, professional salons, it is great. What I see as a gift for the greater beauty business is we are all going to be working a great deal longer than we had anticipated. The female client doesn’t see a waxing or nails or hair color as a luxury. She sees it as maintenance. The male customer is going to dye his hair. There’s going to be a point where I’m out there working at 72, and we’re going to want to look young. So the beauty business is fantastic, and it’s going to get even better.

What do you disagree about?

D.K.: Well, if she listened to me we probably wouldn’t have a lot of disagreements. Half the time, I think she’s not listening and then she’ll disagree with something.

D.K.: We’re speaking the same language in most cases. Sometimes I take design a little too far if it’s a personal project, and she’ll say, “Enough already.”

S.K.: If anything, when we disagree, it’s not really disagreeing. Because of the intensity of both of us, of how involved we are with our businesses and the stress level at times, we can both be cohabitating but no one’s at home. He can be so engaged in his world and I’m so engaged in mine. Sonia, you were instrumental in introducing Daniel to Oribe. What was it about Oribe that lent itself to a brand?

S.K.: His visual being. I knew that they could do something beautifully packaged, which was an area of hair care that nobody paid attention to. I thought, why not treat hair care more like cosmetics, make it beautiful. Oribe has such a distinctive style. I felt it lent itself to something that had never been done in hair care.

You’re both seeing a change in service in your retail channels. How is it evolving?

S.K.: The real separation between mass and prestige was the service element. Now, that is blurring the channels more. Over the past 15 years, I’ve watched the evolution at mass—with product, with assortment, with service, even having a voice, via social media or in stores with the beauty concierge program. I personally do trainings with the beauty concierges. To have them understand and touch and feel the product and to understand the person behind the brand gives them so much more insight.

You have two children. Do you see them leaning more towards hair or makeup?

S.K.: Entrepreneur. Our son, Jonah, is at Babson College. He is Daniel and I on steroids. Our daughter is 15. I just worked on videos, and her friends came over and we shot with them. It’s great to have that pulse of her and her friends. Do you ever talk about having a brand together?

D.K.: You can do other things or we just keep focusing on doing what we love and trying to get it right. Or better.

S.K.: I have two mottoes. You can always be better and to think ahead.