He is on a mission to orchestrate one of the biggest mergers in beauty history.

By Pete Born and Molly Prior on November 15, 2015
View Slideshow 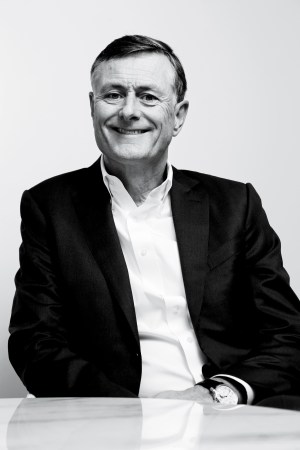 This story first appeared in the November 11, 2015 issue of WWD. Subscribe Today.

The 59-year-old chairman and interim chief executive officer of Coty Inc. has whipped up gale force winds of change since he joined the company four years ago in a bid to transform the group into a leader of the global beauty industry.

Despite the ambition of his agenda — ushered in by a string of acquisitions, including a $12.5 billion deal with Procter & Gamble Co., and resultant plans for a top-to-bottom reorganization to accommodate the incoming 43 P&G brands — Becht appears as a calming presence in the eye of the storm.

Being busy clearly suits him.

Last week is an example. On Monday, Coty revealed it had purchased Brazilian beauty brands from Hypermarcas in a $1 billion deal; on Tuesday, it detailed an executive reorganization and relocation of the group’s executive headquarters to London; on Wednesday, the company held its annual meeting, and on Thursday, the firm reported a steep jump in profits on a 6 percent decline in sales for the first quarter.

Becht sat down with WWD following the company’s first-quarter earnings call. After posing for a photographer for five minutes, he said, “What else have you got?” — a signal for the questions to start.

But his demeanor isn’t hurried. It’s collected, assured and focused. His answers were concise and precise with detail.

In fact, focus is what he aims to bring to Coty even amid the transformational change that the P&G beauty brands will bring. Following the close of the deal, which is expected in the second half of 2016, Coty will be organized into three divisions, each focused on defined business segments.

Becht didn’t wait to put at least one part of the plan into motion. Edgar Huber, who will serve as president of the Coty Luxury division when the P&G deal is done, has for the interim been installed as president of Global Markets, succeeding Jean Mortier, who retired. The other two division heads will be Esi Eggleston Bracey, president of Coty Consumer Beauty, and Sylvie Moreau, president of Coty Professional Beauty.

As for the big picture, Becht made clear what he hopes to accomplish in the long-term.“We want to be a true leader and challenger in beauty,” he asserted, noting that success isn’t found on the balance sheet alone. “A true leader isn’t just somebody who basically creates good financial results, it is somebody who is in the marketplace and is recognized as a leader, and not just by your competitors but also by your consumers. It is a general recognition by the broader community that what we bring into the market are innovative, creative and breakthrough products, which are appreciated by consumers.”

He sketched out his vision for the reorganization, starting with the new London headquarters, even as the group will remain incorporated in Delaware and listed on the New York Stock Exchange. “We are moving only a small group of top executives and a support group,” he said, asserting that it would be a mistake to think Coty was moving the entire staff out of New York.

“The key reason [for the London move] is that we wanted to be closer to the point of gravity of the business. Second, we did not want to be in the divisional headquarters, because each one of these divisions is supposed to run the business really fully end to end. We will have three divisional headquarters — one in Paris, which is really the luxury division, which is fragrance and skin; we will have the consumer beauty division, which is running color cosmetics, retail hair [coloring and styling products plus body care], out of New York, and then ultimately we will have the salon business, which is the professional beauty division run out of Geneva.”

He said, “We didn’t want the top corporate team to be in their backyard. We didn’t think it was fair to them to have daily supervision.

“[The three divisions] will come up with their own visions for the business, their own strategies, what they want to achieve from a financial point of view and what the programs’ priorities are. They are fully in charge of executing against that. You have a divisional president. Below that you have a head of [research and development], you have a global marketing function, you have some global sales people. Then you have regional directors. Each division will have its own regional directors, who in turn will have their country organizations.”

There also will be sales forces servicing local businesses that are under the supervision of a headquarters in another city, he indicated. This structure doesn’t mean, for instance, that “the fragrance business will only be in Paris. We will still have legs in New York and Geneva because that is where we have a lot of our existing people sitting. We are not abandoning all of the existing locations. The center of gravity will sit in Paris. The same for the color cosmetics business. The center of gravity will sit in New York. We have a big color cosmetics business here with brands like Cover Girl, Sally Hansen, etc. At the same time we will retain locations in Europe. We are not taking Rimmel out of London; we are not taking Bourjois out of France.

“But they are calling on different [retail] channels,” Becht pointed out. “Clearly there is no overlap because one calls on, let’s say, Macy’s, the other ones call on the Wal-Marts of the world. The third one calls on the salons. There is some overlap, but it is minor.”

Asked how such a huge and intricate organization can produce growth — which is the point of all of Becht’s wheeling and dealing — the ceo replied, “With the [P&G] transaction, we become a very big force in the beauty space.” He continued, “We will be number one in fragrance globally. We will be the number three in color cosmetics [behind L’Oréal Consumer Products Division and The Estée Lauder Cos. Inc.]; we will be number two in the salon professional hair business [trailing L’Oréal].

“We are going to put together an organization, which is going to excel at both basically doing amazing marketing and innovation in order to drive those brands…and ultimately become an even bigger leader in the beauty space,” Becht continued.

“It would have been very easy not to create three divisions. That would have been more cost-efficient. By having three divisions, we believe we have a very tight, intense focus on what the consumer buys, where she shops and how she buys in specific categories. By doing that, we are going to create a competitive edge. [The organizations] are more intensely focused on fewer things. With that structure, we can become a challenger to some of our competitors.”

Another key benefit of the new structure is that it also will allow for future acquisitions to be added. “You can handle a lot more brands,” he said.

“We have good positions in several [product] segments. We will be looking to expand that. Our footprint is still very much in North America and Europe and we do need to have more of a developing market footprint as well. We’ll be looking at that over time. It’s not just about segments, it’s also about geography.

Coty’s task will be to unlock growth from the 43 acquired P&G brands, many of which are sizable and despite a high level of investment, stuck in a rut. “They are very strong historical brands,” Becht said, adding, “There is a lot of potential which can be unleashed.”

Under the new structure, brands will get all “the nurturing and attention” they need. The staff, freed from the constraints of what Becht described as P&G’s “highly structured organization,” will be able to concentrate on the needs of the business.

“This is why it’s exciting for P&G people, because immediately they do become number one,” he added. “Every portfolio has some challenges from a market-share point of view. We’ll need to work on that, there’s no question about it. Brands have a long, long life. It’s just a matter of putting the right people on it with the right passion to bring back the growth.”

Turning to the Coty business, where sales were driven down by a 14 percent drop in fragrance revenues in the first quarter ended Sept. 30, Becht said, “What we need is a harder focus within Coty in terms of truly building brands, and that goes beyond just pipeline. Pipeline is important but it is much more a focus on how we build brands through communication and proper in-store execution. It’s not like we’re not supporting our brands, but it’s more how we support our brands and how we execute in the field, which can still improve substantially.”

He cited as an example of “where we do a great job” — the Decadence fragrance by Marc Jacobs.