The executive transformed the store into a beauty powerhouse, launching brands ranging from MAC Cosmetics and Shu Uemura to Fenty Beauty in the U.K.

LONDON — Daniela Rinaldi, who helped transform Harvey Nichols into a top destination for beauty, fragrance and cosmetics, is leaving the business after 35 years.

Rinaldi, who was promoted to co-chief operating officer two years ago, working alongside Manju Malhotra, is leaving to take a short break with her family “before considering her next challenge in this sector,” the store said Thursday.

“I have been lucky enough to spend my career in a fantastic organization where I have made lifelong friends and leave with tremendous pride in the brands, partners and businesses that I have supported and helped to create,” Rinaldi said.

Harvey Nichols chairman Sir Dickson Poon thanked Rinaldi for her loyalty and dedication, “and I wish her all the best as she takes a deserved break with her family before moving on to her next career step.”

Malhotra will become sole chief operating officer and continue to work closely with Pearson Poon, executive director of the store, and the rest of the management board. The store declined to say whether it planned to replace Rinaldi. 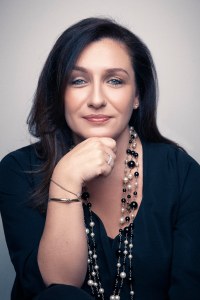 During her long tenure at the store Rinaldi built Harvey Nichols into a beauty powerhouse — launching brands ranging from MAC Cosmetics to Shu Uemura to Fenty Beauty in the U.K. — and oversaw the store’s evolution into a multichannel — and multiservice — business. The exclusive Fenty launch was such a success that for months afterward, Harvey Nichols had to place velvet ropes outside the entrance to keep the crowds in check.

In 2012, she oversaw the opening of Harvey Nichols’ Beauty Bazaar in Liverpool, England, a stand-alone specialty store offering products and services ranging from hair cuts and color to makeovers, injectable treatments, tanning — and Champagne.

She began her Harvey Nichols career on the selling floor and eventually made it to the management board. Asked in 2013 what kept her working for Harvey Nichols, Rinaldi said she loved the brand.

“It’s intimate and has a heritage. It helps to enjoy what you do. My responsibility and area is all-encompassing, so that makes it even more interesting — to look at what’s happening in fashion and apparel and food and wine and beauty. Fundamentally, it’s all here, and it’s pretty similar,” she said.

Rinaldi and Malhotra were appointed co-chief operating officer’s in 2017.