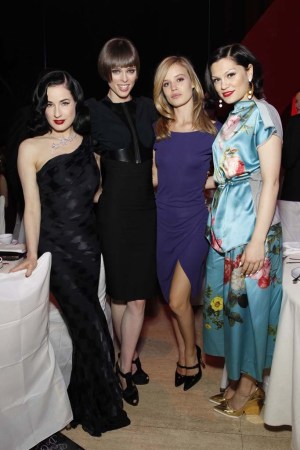 On Wednesday night Cipriani Wall Street was abuzz with black tie-clad industry insiders attending the eighth annual Delete Blood Cancer Gala. This year’s event, the largest and most far-reaching to date, drew approximately 800 attendees and raised over $4 million for the cause, and didn’t disappoint on emotional moments.

“The appeal of it to me is you can really see it working and see how you can be saving someone’s life,” said Georgia May Jagger, the face of Coty brand Rimmel, and the first Coty global ambassador for the cause. “I think another great thing is that social media pushes awareness to places normally people wouldn’t know about charities like this. I will be doing that today and over the next year to get awareness and more donors.”

Emceed by Chris Tucker and hosted by Katharina Harf, the organization’s cofounder and director, there were laughs and tears throughout the evening, which honored Evan Sohn and the Sohn Conference Foundation.

“I was looking at engagement rings, but I’d rather save a life with that money,” Tucker told a crowd that included Rachel Roy, Coco Rocha, Doutzen Kroes and Dita Von Teese. “I want to be one of the guys who saves a life.”

From uniting a 13-year-old patient with his donor to moving performances by LP and Jessie J, who sang under a huge fluorescent “Dream Big Do Good” sign, the evening was meant to increase awareness for the staggering number of deaths each year due to blood cancer.

“For us, the gala is the opportunity to gather all the people that are helping us, all the people supporting us and showing empathy and sympathy for the cause,” said Coty chief executive officer, Michele Scannavini, adding that earlier that day there was a donor drive at the Empire State Building, which was also lit red and white in honor of the cause. “It’s important to physically show people who help save lives. It is very inspirational.”

Scannavini continued, “This goes beyond the financial participation. It’s truly an emotional moment for the organization.”

Delete Blood Cancer, which helped register more than 4.2 million potential donors and facilitate more than 41,000 lifesaving transplants globally since it began, is in expansion mode, according to Scannavini, who added Coty collaborated with the organization in 2006. After entering markets like Germany, Poland, Spain and the U.K. throughout Coty’s partnership, upcoming plans call for expansion next into underserved locations like India. “The idea here is to help recruit as many donors as possible to try and save as many lives as possible,” he said. “The goal is to have more and more people be a part of it.”