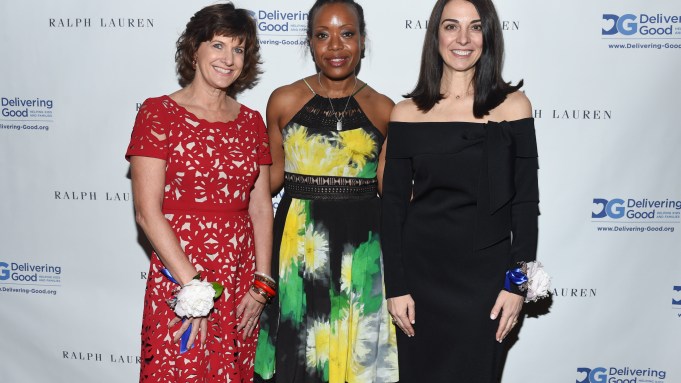 At a sold-out luncheon at The Pierre hotel Wednesday, Delivering Good (formerly known as K.I.D.S./Fashion Delivers), showed through heartfelt examples how the charity has helped to alleviate the effects of poverty and disaster by providing new products to children and families in need.

Delivering Good, which changed its name this spring to better reflect its mission, unites manufacturers, foundations and individuals who provide new merchandise (including clothing, books, footwear and necessities) distributed through a network of agency partners. The charity, headed by Allan Ellinger, board chairman, and Lisa Gurwitch, president and ceo, has donated $1.6 billion in products to children and adults in need for 32 years. The luncheon, which was attended by 460 guests, raised more than $429,000, both record numbers.

Arlene Goldsmith, who founded New Alternatives for Children, which helps children with special health-care needs, described her 23-year relationship with K.I.D.S., now Delivering Good, which has provided toys, winter coats and other necessities to the program’s poor families. At the luncheon, she introduced one of her recipients, Tamara Morgan, now 32, who was born with a severe bone disease called osteogenesis imperfecta and has had numerous surgeries, fractures and severe pain throughout her life. Morgan, who is 3-feet, 2-inches tall, is in a wheelchair and is one of 10 children, has been helped by NAC for years. “NAC reinstated normalcy and confidence to my parents…and had a tremendous impact in my life and my family’s life,” she said. Despite her serious health issues, Morgan, who grew up at New York Foundling Hospital, went on to receive a bachelor of arts at Hunter College and a master’s degree in art therapy at N.Y.U.

In presenting the award to Reese, Stan Herman spoke about the designer’s work as a board member of the CFDA, advocating for HIV charities, and her work for Planned Parenthood, Jackets for Jobs and Bottomless Closet. “The list goes on and is consistent with her life of service,” said Herman.

“This is truly an honor, and Delivering Good has done so much good for so many in need,” said Reese. She said she visited one of the community partners, Room to Grow, which gives parents tools to be the best they can be. Through “wonderful donations,” children get many books and by the end of their time in the program, they have 120 books for their own library. “As a kid, reading was everything for us, she said, describing her childhood in Detroit and how she has been inspired by her 99-year-old grandmother and mother, who were actively involved in their careers and the community.

Target’s Dean spoke about her work for Bike Cops for Kids, which gives free bikes to kids in need and helps establish positive relationships with police officers. She spoke about how her diverse group of girlfriends has inspired her and provided a support system through the ups and downs of her life.

Todorovich, who was introduced by her daughter Emma, described her humanitarian work as the founder of Circle of Hope Children’s Foundation, dedicated to providing need-based aid to underprivileged children from all works of life. Having come to New York from Belgrade, Serbia as an exchange student in 1986, she fell in love with the city, the fashion industry and her husband. She said she’s fortunate to work at Ralph Lauren, a company that exemplifies what it means to give back. In the late Nineties, when war broke out in the former Yugoslavia, she visited a refugee camp and a five-year-old girl, who had lost both her parents, climbed in her lap and gave her a hug. “It was huge and warm and bright and very intense. It was love for a complete stranger and humanity. It motivated my family to start this organization, which has helped hundreds of thousands of people around the world the last 10 years. Delivering Good is driven by the same kind of love,” she said.