Diversity and Inclusion in the Workplace: How Long Will It Take?

A few months? A few generations? H.r. experts debate the challenges of building a diverse — and inclusive — workforce, and believe it’s ultimately up to the brands to make changes.

Campaigners outside Oriel College at Oxford University, where they are calling for the removal of a statue of Cecil Rhodes.

LONDON — Many will recall tuning into Princess Diana’s funeral in September 1997 when Elton John performed “Candle In the Wind,” which he’d rewritten in her honor with lyrics that began, “Goodbye, England’s rose.”

John and his longtime lyricist Bernie Taupin drew on a long-standing cultural trope to honor the late princess who’d done her country proud: The Tudor rose is England’s national flower, while an “English rose” refers to a woman with a fair complexion, pink cheeks and wholesome appeal.

What with all the wet, cloudy weather, there are millions of pale and rosy-cheeked women here in Britain, and that was exactly the type that Tacita Small was tasked to find during one of her many searches.

Small is English, Black and has worked in senior h.r. roles at companies including BBC Worldwide, Apple, Ralph & Russo and Westfield. She is the founder of The Small HR Co., and the irony of that particular request — from a company chief — was not lost on her.

She said her client was convinced that customers were more likely to buy products from an English rose. “People talk about wanting a diverse workforce. While they may hire someone like me, they will still ask me to go and hire somebody else. They put their own prejudice in, and say, ‘Well, actually, I think I want my clients to buy from an English rose.’”

Companies, Small said, often want to appeal to a certain, non-inclusive demographic believing it to be their key customer base, but often they’re mistaken. “They think that the way to make money is to hire someone who looks like them, but in doing so, they are servicing a very small demographic.” 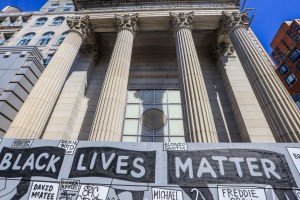 Black Lives Matter protest in New York. The protests have led to a groundswell of support for diversity in the workplace.  Vanessa Carvalho/Shutterstock

Small added these businesses need to take a harder look at a lot of things, including the data. “When you do have an inclusive workforce, your bottom line can go up by a minimum of 20 percent just by having a high mix of diversity in various areas of the business, especially in senior roles,” she said, adding there is  a wealth of talent out there.

Well before Black Lives Matter came into being and before the surge of anti-racism protests following the killing of George Floyd — and numerous other Black Americans — at the hands of police, h.r. professionals, consultants, executive recruiters and headhunters were battling to make workplaces, in fashion and the creative industries, more inclusive.

Fashion Roundtable, the fashion-focused consultancy, events business and industry advocate, is currently preparing a white paper on representation and inclusion, and is surveying members of the industry about their experiences.

As part of its white paper research, Fashion Roundtable has been looking at U.K. government data which shows that 8.7 percent of people employed in design and designer fashion classify as Equality Act Disabled, compared to 12.4 percent of the U.K. workforce.

The U.K. has a Black, Asian and minority ethnic population of 14 percent, while design and designer fashion has a 10.6 percent employment representation of that cohort. It’s a particularly low figure considering that most fashion jobs are based in London, and more than 40 percent of London’s population is of those ethnic origins.

Recruiters are on the front lines, finding the talent and convincing the brands their candidates are the ones for the job. They’re also fighting in the candidates’ corner, scouring the globe for new faces, promoting unconventional talents, working with charities or founding their own organizations aimed at exposing underprivileged kids to careers in the creative industries.

Their challenges are many: Every day they deal with unconscious biases; brands and companies with good intentions but bad habits; difficulty finding diverse talent, and the power of entrenched white, middle-class “old boy” networks. 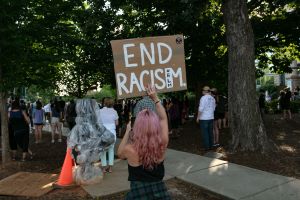 Atlanta protesters participate in “Take it down” rally against the confederate memorial obelisk in Decatur square. The anti-racism protests have spurred companies in the U.S. and worldwide to examine just how diverse their workforces are.  MohammadJavad Jahangir/Shutterstock

Yet they persist, and insist that the onus, ultimately, is on the brands and companies themselves to break down the barriers to workplace diversity and to create inclusive cultures.

Recruiters — and others concerned with diversity in the workplace — would also argue that companies need to act early in the career cycle; market themselves harder and better to more diverse communities and networks; and take the long view when cultivating talent.

These recruiters would argue that companies cannot seek graduates only from Oxford, Cambridge, the Ivy League or Central Saint Martins if they want to build a diverse bank of talent. They have to look to high schools and technical schools, create internships, apprenticeships, train people and invest in them.

They also have to look inward at their own biases and then look outward, and accept diversity as a positive challenge — rather than a chore.

Caroline Pill, vice president, global executive search at Kirk Palmer Associates, works with a range of luxury and beauty companies, filling top management roles on both sides of the Atlantic.

She believes that companies need to offer access to promising talents from a variety of backgrounds early on — not just when these people get to management level. “Grow talent from within, and give people equal opportunities,” she said.

Pill also believes the old system of working family and friendship connections to get internships has got to stop. “All of that needs to disappear. Merit needs to be at the top of the agenda, and in order to have merit you need equal opportunity. That shouldn’t happen 15 years into someone’s career, that should happen way before. That is what needs to be fixed.”

Like Tacita Small, Pill argues that the more diverse the workforce, the more powerful, and lucrative, the company. “Companies have to address different demographics, and the only way to do that is to ensure your senior management team is the voice of the customer,” she said.

Rhiannon Bail, an associate in the employment department at Mishcon de Reya, the international law firm, said in order to attract a more diverse pool, recruiters and employers need to cast a critical eye over “where they are looking for candidates, how they are advertising roles, and what they themselves are saying and doing in relation to diversity and inclusion.”

Vanessa Belleau, an executive coach and consultant who works with fashion and media brands on inclusion in the workplace via her London-based company High Fifteen, added that organizations need to understand they are built on the shoulders of people, not robots.

“Companies need to look at the array of strengths that a team can have, and then try to fill the gaps,” said Belleau, adding that she’s a big believer in psychometric testing and promoting talented people who are often ignored or sidelined in the professional space.

“Dyslexic people in the creative industry are a gift because they think differently — but a lot of people don’t understand that. Those guys will be some of the most creative individuals in a company,” she said.

She also believes that companies and recruiters should engage in “nuanced” searches. She said if companies are looking for Black, indigenous and other people of color candidates with top grades from universities like Oxford, Cambridge or Exeter, that pool will exist — but it’s going to be small.

“You have to be mindful about the techniques you are using, and recruitment interviews need to change. We need to start asking people different questions, testing them differently,” she said.

Emma Davidson, the managing director of Denza, which places design and nondesign talent in fashion and luxury businesses around the world, said she tries to put herself into her candidates’ shoes.

“I don’t want to send my candidates to a company that wants to get rid of someone who is pregnant, dyslexic or ‘different,’” said Davidson, adding that she always tries to have a diverse bank of candidates on her books.

“I think clients know me as someone who will go anywhere to look for talent. I don’t just stick to the best-known schools or candidates who have only worked at the ‘right companies.’ I honestly don’t care about that stuff. I am interested in meeting people and reviewing their profile on a case-by-case basis,” she said.

“Getting out into the world, rather than doing our job from behind our desk, or visiting Mexico, Sri Lanka or Hong Kong and listening to students explain their concepts and design process, is really a key part of our process,” Davidson added. 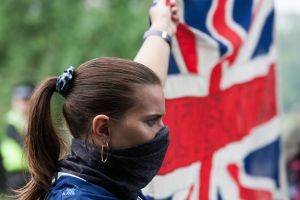 Recruiters and h.r. professionals also say that creating a culture of inclusion is key: It’s no good building a diverse workforce if the company culture remains stuck in its old ways.

Vivian Murinde recalls working with an architectural firm that had hired members of staff, some of whom were Black and gay.

“They wanted ethnic and gender diversity, and we helped them with that. They hired quite a few new candidates — which was brilliant,” said Murinde who, as senior regeneration manager of Queen Elizabeth Olympic Park, is helping to build the 2012 Olympics site in East London into a cultural, creative, and tech hub, with the local communities at its heart.

She soon heard back from the new hires at the (mostly white, mostly male) architecture practice, but the news wasn’t so good: One Black male said he was greeted with a fist bump on his first day at work; another was asked about how his family had adjusted to his coming out as gay. One fielded questions about his culture which he’d found mildly offensive.

“Even where a company has been proactive and delivers results, their culture may still not be ready for change,” said Murinde.

Belleau of High Fifteen believes that companies really need to focus on the endgame, “which is not diversity, but inclusion. There needs to be a culture of celebrating difference, an approach that says, ‘We want you to feel good about working here.’ It has to be an intentional, and conscious, effort.”

Bail of Mishcon de Reya said changing a culture is not something that companies can magic up overnight.

“It’s much deeper than that. However, I have seen more appetite for organizations to take action and change in the last few weeks than I’ve seen for a long time: This is definitely a positive sign and much credit for this goes to the Black Lives Matter movement and others around the world fighting for equality.”

Tacita Small believes that cultural change in the workplace can — and should — happen soon.

“We need to see speedy change, immediate change. The talent exists to make that change today. It isn’t about swapping some people out, or giving other people special treatment. The roles are there, the people are there and it’s not very difficult to match them — it’s not. This exercise should not take two years. We could live in a very different world by December,” she said.