By Julie Naughton on May 6, 2011
View Slideshow 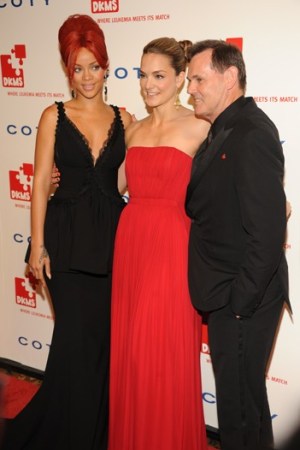 Cipriani Wall Street in Manhattan was the stage for the fifth annual DKMS Gala, which drew stars ranging from Mary J. Blige, Iman and Rihanna to Pharrell Williams, David Bowie and Cyndi Lauper, and raised a record $2.5 million to support the fight against leukemia and other blood-related cancers.

“Tonight is about raising awareness for something that is ailing so many people,” Williams, who emceed the evening, told WWD. “I lost two grandmothers to leukemia, so I know what it’s like to lose a family member like this.”

Blige performed three tunes, including “One Love,” drawing the room — including Bowie and Rihanna — to their feet. Rihanna dedicated her award to Shannon Tavarez, an 11-year-old actress who lost her battle with leukemia last November.

The evening was an emotional one for DKMS chief operating officer Katharina Harf, who lost her mother to leukemia at 14. At the time, only 3,000 unrelated bone marrow donors were registered, none a match. Since DKMS’ inception, the organization has registered 2.7 million donors, two of whom met for the first time at the gala. Harf noted that the monies raised from the gala would allow the organization to register an additional 40,000 donors. Harf also encouraged attendees to visit getswabbed.org and consider donating their own bone marrow.

Coty Inc. became formally involved with DKMS in 2006, and since that time the company has leveraged its celebrity partnerships to help raise awareness for the cause, said Bernd Beetz, chief executive officer of Coty Inc.

Before the event, Rihanna dished about her new fragrance, Reb’l Fleur. “I didn’t really know what to expect, but I knew I wanted to be very hands-on, and they let me have a lot of control from scratch. My mom was a perfumer, and I was very much into that kind of stuff growing up — but when I had to do it, I had to figure out every type of scent, what I wanted to put together, what worked and didn’t work. It was really an enjoyable experience, down to designing the bottle. Having fans smell like me — that’s the best part.”

Lauper, who just did an OPI shoot with Coty, was traveling with Firmenich’s Theo Spilka, a matchmaker between celebrities and beauty companies — and admitted she’d like to do a fragrance of her own. “That’s why I’m not wearing one tonight — I don’t have one of my own,” said Lauper. “I would like a very elegant fragrance that has a touch of dark chocolate, a touch of burnt orange and a touch of bergamot in it — and maybe a tiny bit of tobacco.” Lauper is also currently writing the music for a new Broadway play, “Kinky Boots.” “Harvey Fierstein is writing the book, and I’m writing the music,” said Lauper, who is also writing an autobiography and will start a new reality series by Mark Burnett in September “about my crazy life.”

Leighton Meester arrived with Vera Wang; the actress is the face of Wang’s new Lovestruck fragrance and was coming from a press event at Wang’s apartment. “I couldn’t get over her kitchen,” said Meester. “I was like, my God, this is the size of my apartment! I would cook a dinner like you would not believe in there!”