The event raised money for the Look Good…Feel Better program that provides emotional support to women with cancer. 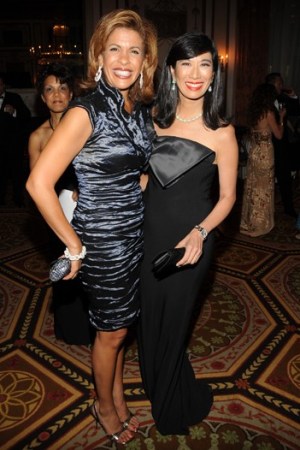 Beauty sales may be stalling because of the recession, but the economic downturn hasn’t derailed the industry’s philanthropic drive. The 25th annual Dream Ball, held Thursday evening at the Waldorf-Astoria in Manhattan, raised $1.8 million for Look Good…Feel Better. While the total was below last year’s take, the organizers appeared grateful for the continued support.

“Today we’re facing a crisis of a different sort and now more than ever philanthropic organizations need support,” said Jung, who was slated to be the organization’s honoree in 2001.But the event was cancelled because of the 9/11 terrorist attacks that happened only days before. Jung did not get her night on the podium until last week, when she — like the following speakers — was greeted with a standing ovation.

“The industry stepped up tonight,” she continued, adding that over one million women have benefited from the Look Good…Feel Better program since its inception 20 years ago. “We have redefined hope in a bottle into hope for living longer and hope for a cure for cancer,” she asserted. Jung closed with a call to action: “On this special milestone of our 20th anniversary celebration, I am asking us as an industry to recommit to our cause with renewed passion and dedication. Now more than ever, women need our support. And I’m not just talking about the transformative power of a little lipstick and blush. I’m talking about the power of hope…the power of optimism. I’m talking about the courage to believe…the courage to fight…the courage to overcome.”

Policastro recalled the profound impact of visiting a LGFB session, naming the eight women he met and introducing one who was his guest for the evening. “I know something about amazing women,” he said, noting his mother, sister and wife were all in the audience, “and they were all amazing.”

Policastro also tipped his hat to those who made donations at a time when the recession has put a crimp on fund-raising. “Each of you made a difficult choice this year in looking past the state of the economy and its effect on business and seeing the importance of giving.”

After noting that Walgreens’ 250,000 employees had collectively raised over $17 million for breast cancer research over the last 11 years, Wasson emphasized the retailer’s commitment to health and beauty. “When it comes to living with cancer, we know how heavy the toll can be,” he said, “but knowing that you still look like yourself helps people stay with their treatment.”

Kotb added levity to the evening, revealing that after her diagnosis, a doctor asked her how attached to her breasts she was. “I said, ‘I like them, but I’m all about my hair,’” she laughed.

Look Good…Feel Better is a joint program between the Personal Care Products Council, the American Cancer Society and the and the National Cosmetology Association that helps women with cancer deal with the side effects of chemotherapy and radiation, by schooling them in beauty techniques and providing them with makeup.