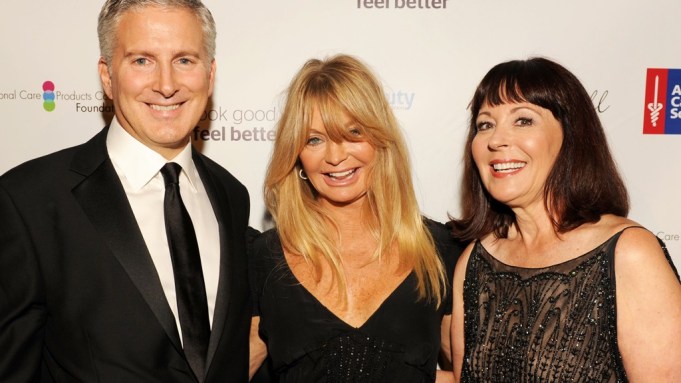 The menu of the 29th annual DreamBall, which raised more than $2 million, was inspired by the taste buds of its honorees. From the baked tagliolini and ham appetizer, a favorite of Dior’s Pamela Baxter, to the main course of branzino al forno, meant to pay homage to Firmenich’s Jerry Vittoria’s Italian roots, the event, held at Cipriani 42nd Street Sept. 26, was all about giving the fight against cancer a personal touch.

“I wanted to stop by and show my support. This is my duty,” said Goldie Hawn, who spoke to WWD about her personal connection to the crusade to find a cure. “My mom had breast cancer and this is an organization doing incredible work.” Hawn also discussed her “Mind Up” program, which is now in six countries and helps children to understand their emotions, with a focus on creating optimism and mental stability.

“I go to the schools. It’s what gives me the juice because when these kids sit quietly three times a day and they learn about how their brains work and they learn how to regulate anger and when bullying goes down on the playground, I cry,” said Hawn, in Prada, who is writing her second book on happiness. When asked if she’d be reentering the entertainment business, Hawn said, “I don’t know. I’ll let you know. I’m looking in television, I’m looking at movies, I’m looking at producing things I’m not in. I’m missing my world a little bit, to tell you the truth.”

Ever the proud mom and grandmother, Hawn also spoke about her star-studded brood. “Working with the family really has been fun,” she said. “We’ve got a pretty hot family now. Wyatt [Russell, her son] got a very big role in ‘22 Jump Street’ so he’s on his way and Oliver [Hudson, her son] is on ‘Nashville’ and he’s written and created a TV series called ‘The Lord of Venice,’ and it is funny, and Kurt [partner Kurt Russell] is making a movie. There’s a lot going on.”

When it came time to acknowledge the honorees, Michael Gould, Bloomingdale’s chairman and chief executive officer, presented Baxter’s award, calling her “a light in this industry.” After taking the stage, Baxter, president and chief executive officer, LVMH Perfume & Cosmetics, North America and president of Christian Dior Couture said, “those of you who know me know how much this organization means to me that we help thousands and thousands of women who are going through a very difficult time.”

She then “put [her] old chairman hat on” and asked the 535 audience members to “dig deep into their wallets” in order to reach the evening’s $2 million goal. Of Vittoria, presenter Camille McDonald, Bath and Body Works executive vice president, said, “he gets women, he’s got four gorgeous women at home [his wife and three daughters],” adding, with a laugh that Vittoria is “the first ‘Yaley’ I ever liked.” Upon the receipt of his award, Vittoria, president of fine fragrances at Firmenich, North America, took a moment to reflect, telling the audience to always be thankful. “Live life to its fullest because one day you will face a day of reckoning,” he said. “I thank God I’m here with all these blessings.” Vittoria then called the race to cure cancer “a fight we must win. We must do the best we can so all the little boys and girls can get to be my age and cancer can be just a memory,” he said.

Next to be honored was 2013 Dream Girl Colleen Williams, who shared how Look Good Feel Better helped her navigate her personal journey through a breast cancer diagnosis. “You’re not just giving makeup, you’re also giving hope and energy,” said Williams of the organization. “They pushed us not to give up on ourselves.”

A spirited auction followed in which charity auctioneer CK Swett with the help of Woodruff and Darland helped cajole audience members to contribute to the cause, with offerings like Grammy tickets and the opportunity to create a one-of-a-kind fragrance with Firmenich. The silent auction, live auction and make-a-pledge options, raised more than $115,000.

At the conclusion of the evening, 300 people attended the third annual after party, DreamBall After Dark, which aims to connect young professionals.

Among the notables in attendance were Nicole Miller, Robert Verdi, Carmen Marc Valvo and Roblé Ali, aka Chef Roblé.