Flower, which she co-owns with design and manufacturing firm Maesa Group, will enter 1,509 Wal-Mart doors in January. 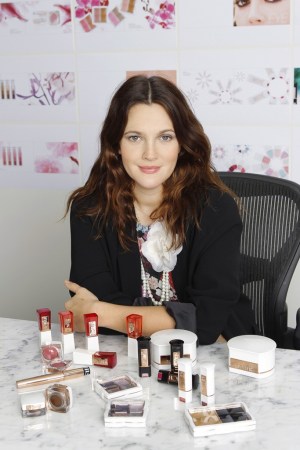 In a Hollywood career spanning more than three decades, Barrymore wasn’t content to stay in front of the camera, but progressed to producing and directing, piling up behind-the-scenes credits under the mantle of her production company Flower Films — and she’s following the same trajectory in the beauty business. After a stint from 2004 to 2005 as a spokeswoman for Lancôme, Barrymore enlarged her role in beauty at Procter & Gamble Co.’s Cover Girl, where she’s been a face and co-creative director since 2007, and is now taking it a step further by launching Flower, a color cosmetics brand she co-owns with design and manufacturing firm Maesa Group that will enter 1,509 Wal-Mart doors in January.

“I think, if you really care about things, then you just naturally get involved. I don’t want to sit there and hope it works out. I want to be in the middle, in the mix, making sure it works out,” said Barrymore. “It is almost an uncontrollable desire to be one of the people who is creating. Maybe it is just a type of personality. I can’t sleep at night. I care.”

Barrymore may have lots of sleepless nights ahead — and they won’t only be due to her two-month-old daughter Olive Kopelman, who has already made a splash in the tabloid world. She and her mother are pictured on the cover of the latest issue of People magazine.

With Flower, Maesa and Barrymore have committed to transforming the landscape of the beauty industry by offering what Scott Oshry, president, partner and board member at Maesa, described as “true luxury at mass. Once we identified this white space, we thought to ourselves, you know what, we should tackle this. We should build the best color cosmetics brand that we can,” he said.

Wal-Mart would be the ideal platform for the Flower concept. Barrymore summed up Flower’s reason for the relationship with the world’s largest beauty retailer in a single sentence: “We want it to be in people’s hands.” Oshry pointed to another: Carmen Bauza, vice president of beauty and personal care at Wal-Mart Stores Inc. He believed she’d understand Flower’s goal to elevate mass beauty aisles. “Knowing what Carmen has been doing at Wal-Mart for so many years, we knew that she’s a rebel. She’s a free thinker,” he said.

Of course, Bauza did understand. She’s made it her mission to address what she said had been “the biggest miss” in Wal-Mart’s assortment: “aspirational, prestige product. Mass has pretty much been doing the same thing over and over again,” she said. Flower could be different. “What a great marriage for all these three businesses to come together and put something out there that’s so accessible and so great for customers. The formulas are absolutely incredible. The packaging is incredible,” said Bauza.

Flower will be housed in four-foot sections and endcaps at Wal-Mart stores exclusively. It will be available online at walmart.com, too. Although Maesa and Wal-Mart wouldn’t divulge the terms of their exclusivity arrangement, both parties said they have a multiyear deal. Industry sources estimate Flower will generate $50 million in first-year retail sales.

Flower will sell 181 stockkeeping units priced from $4.98 to $13.98, including 70 in the face category, 44 in eye, 51 in lip and 16 in nail. The face products contain a proprietary botanical-driven “soft focus complex” to amplify skin’s glow. Maesa emphasized that the formulas are custom-made at the same price as those used in luxury products, meaning the firm spends two to three times what a typical mass beauty marketer does on each product.

If Maesa operated with a standard mass beauty brand business model, Gregory Mager, founder and chief executive officer of the firm — which is financing Flower — said producing the brand would have been impossible. The standard business model is to hire an extensive sales force, but exclusive distribution at Wal-Mart has eliminated the need for it. The standard business model is to shell out millions for ads to raise consumer awareness, but Flower will rely on Barrymore’s popularity, social media, in-store imagery and Wal-Mart’s reach to spread its message.

“The business model is actually reversed from the typical P&G or L’Oréal business model, where instead of spending 20 or 30 percent of our revenue in advertising, it goes into the formula,” said Mager. “At the end of the day, what we are able to spend for our formula is strictly equivalent to what prestige brands are spending.”

The packaging is above grade as well, chimed in Oshry. The majority of Flower’s products are encased in white and rose gold. The white was chosen because its happy, clean and unintimidating, unlike the army of black packaging at prestige retailers. The rose gold adds a sumptuous touch. “It’s so luxurious, but also approachable,” said Oshry of the packaging.

Asked what the star products in Flower’s lineup are, Petra Tucker-Moss, senior director, product development and marketing at Maesa, declined to pick favorites. “We are a line of star products. There is not one item we compromised on,” she said. However, she and Barrymore did go on to extoll the attributes of Flower’s Ultimate Mascara, Powder Up loose powder and its BB cream.

Tucker-Moss said Flower’s BB cream is a “true BB cream.” “It is not the new version, which is really a marketing twist. They are tinted moisturizers,” she said. “Ours is an actual treatment cream that addresses everything from blemishes to enlarged pores.” Talking about Powder Up, she continued, “Our loose powder is quadruple milled. Only one factory — ours — has the machine to physically do it. It’s only been at prestige. It’s never been seen at mass before.”

Barrymore elucidated that Ultimate Mascara is a modern take on Maybelline Dial-a-Lash, a favorite makeup product of hers from the Eighties that allowed users to adjust how much mascara they wanted to put on. Ultimate Mascara has three settings for the brush, so users can choose to enhance lashes’ length, thickness or curl — or all three. “If you are feeling thickening one day, just leave it [the brush] scrunched. If you just want lengthening, leave it long, but if you want that amazing, grab it, clump it, thicken it, brush-out quality, you move the wand around,” she said.

The timing of Flower’s prestige positioning at mass couldn’t have been better. Bauza indicated Wal-Mart customers are hungry to get their hands on quality products at prices that don’t break the bank. “Based on the current economic conditions, we’ve seen that the customer does have concerns. There’s a new normal out there, but, with that new normal, she still wants to feel beautiful. She still wants to be able to spend on herself, and we want to allow her to be able to still do that and not feel guilty,” she said.

The timing of Flower also couldn’t have been better for Barrymore. When Maesa approached her about a year ago, Barrymore was at the tail end of her contract with Cover Girl that is up in January and, with a baby then soon to arrive, had decided to push the pause button on her busy movie-making schedule. She was filling her freed up schedule with cooking because, she explains, “I didn’t want to be the kind of mom who didn’t know how to cook.

“This last year when I’ve been developing this, there wasn’t any films, there wasn’t anything else,” she said. “This was something that we really dedicated ourselves to, and we couldn’t have pulled it off in this way otherwise in this amount of time. It was really my sole project, and I don’t want to do things where I am just checking in and out. I really do everything at infinite percent.”

In Barrymore, Maesa had found a proven cosmetics player ready to take on her next challenge in the beauty arena. “This is not a celebrity brand,” said Oshry. “This is a brand that was built by business people that have a passion for this particular segment of the market. Drew is an owner and one of the founders of a new color cosmetics line.” To Wal-Mart’s Bauza, that involvement is key. “We have not seen success when you have celebrities just put a name on something,” she said.

While Barrymore isn’t sure what her filmmaking future holds, she is certain she will remain devoted to Flower. “I’m going to see, especially as a new mom, where my life is headed. It is an interesting precipice for me of how do I want to live the rest of my life. I know what I’ve done up until this point. If you look, I haven’t been working at the same pace recently because I’ve been doing it for 36 years. Your priorities continue to shift and change,” she said “All other things come and go. This is real right now. It really does have my time and focus.”