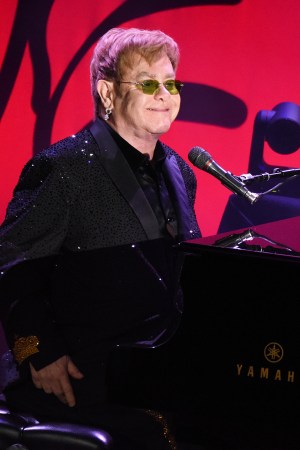 Emotions were still running high around 10:20 p.m. Tuesday, toward the end of the Breast Cancer Research Foundation gala at the Waldorf Astoria in New York.

“Life goes on,” said Leonard Lauder, chairman emeritus of the Estée Lauder Cos. Inc. and honorary chairman of the BCRF. “Evelyn is the one that founded this, and we were worried that when she passed away we would lose momentum. We’re gaining momentum, so it shows you the power of a great idea to go on if you believe in it. Never stop at an idea because the ideas build this nation and build this world.”

The late Evelyn Lauder started BCRF 23 years ago in 1993. Tuesday was the organization’s 16th annual gala, emceed by Elizabeth Hurley, with musical guest Elton John, who dedicated part of his performance to Leonard.

“I’ve learned so much from [the Lauders] about generosity and philanthropy and humility and kindness,” John said. “This song is about New York City, and I want to dedicate it to Leonard. He also dedicated a song to his late best friend, Ingrid Sischy, who died from breast cancer in 2015.

Other attendees included Vera Wang, Misty Copeland, Tracy Anderson, Bethenny Frankel and Donna Karan, an originator of the see-now-buy-now philosophy. “I believe that fall should be in fall, and spring and summer should be in spring and summer. I do not want to see winter clothes when it is 100 degrees outside,” she said. “What’s happening because of Instagram and technology, [the customer] is seeing everything immediately, and by the time they are selling it six months later at retail, they’re bored.”

The event raised more than $6.8 million for breast cancer research. “We’re here because one phenomenal woman had a vision, and that was that one day we will live in a world where women no longer die of breast cancer, and as I look around this room I know that Evelyn Lauder would have really loved tonight,” Hurley said.