Nordstrom's co-president started working at age 12 in the stockroom. 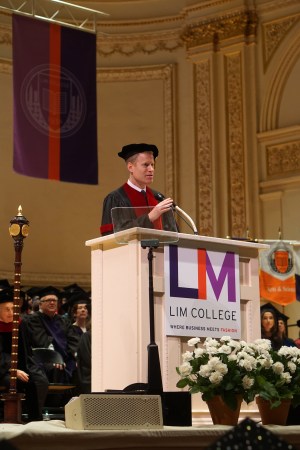 Even if you’re a Nordstrom working at Nordstrom Inc., there’s no escaping retailing’s hard knocks.

Erik Nordstrom, co-president of Nordstrom, keynoting the 77th Commencement of LIM College Wednesday night at Carnegie Hall in Manhattan, spoke from the heart when he said he started working at age 12 in the stockroom of the Seattle store; that there was no master plan mapping his future at the family-controlled business, and that once as a store manager he was called a “buffoon” by an irate, dissatisfied customer.

“Wow. It’s quite an honor for a simple retailer from Seattle to be here, and at Carnegie Hall, with you,” Nordstrom told the 479 graduates, after the procession to “Pomp and Circumstance” amid cheers and whistles from friends and family. “By the way, if you have jobs on your mind, Seattle is a great place. Love to have ya,” said Nordstrom, who received LIM’s Distinguished Achievement Award and an honorary Doctor of Commercial Science Degree.

Nordstrom said he felt strange doing a commencement speech, and that he dug into his file of correspondences to share a 1994 letter when he was the manager of Nordstrom’s Mall of America store sent from a customer to his father Bruce, co-chairman of the company then. Ironically, for a company known for strong service, the customer wrote that one cosmetic salesperson was “condescending and rude” and that after reporting the incident, he was “shocked and dismayed” at the response from Erik, who said he was sorry and offered to wait on the customer himself but that was all, and that Erik was a buffoon.

“That letter was sent to my Dad — the greatest retailer I have ever known. The greatest person I have ever known. I was devastated, of course. I thought the customer was way off base and just completely wrong. But now looking back on it, I think the customer was right and I was a buffoon.…One of the great things I have always enjoyed about this business is the pure objectivity of it. Yes, the customer is always right and that makes things very clear for those of us in our business. Our goal is to make customers feel good.”

Recalling his youth, Nordstrom acknowledged, “I did not grow up as a teenage boy with a particular passion about women’s footwear. But I did start at age 12 in the stockroom. There was no master plan. My Dad’s deal was about work ethic. When you turn 12, you get a job. More accurately, my Dad’s deal was if you want to live at home, you get a job.”

“What I loved from day one was being part of a team, that was better than I could be on my own. That team comprised different people with different backgrounds and different experiences. The first of many lessons that this business has taught me is the power of diversity.”

Eventually, he was promoted to buyer/manager of the women’s shoe department in the Tacoma, Wash., store. “Most of you probably haven’t been to Tacoma and may not think that’s a big promotion. But it was huge promotion for me. I was pretty happy with myself.”

Until, maybe, the first day when he met the number-one sales person in the company at that store, David Butler. “He was earning well more than double what I was making; it struck me as a little odd.” Nordstrom complained to his father who responded, “No, nothing is wrong. He’s worth more than double what you are. Now go out and try to sell some shoes.”

“Ego bruised but still intact, I go out on my floor. I am going to greet my customers and it’s going to be awesome. It quickly became clear that they weren’t coming in to see me [or] coming to Nordstrom to shop. They were coming to see David,” the star salesperson. “He would have two, three, four, five customers waiting, and I was standing there doing nothing. He was the best I’ve ever seen. I learned some things very quickly. I learned how great our company could be. How great the customer experience could be. The customer thinks of our company not as a faceless corporation, but as a real person.”

Then Nordstrom imparted some “life lessons,” telling the graduates:

“Embrace failure. It’s OK to be a buffoon sometimes. Don’t make it a habit. Failure is not defining. How one responds to it is.”

“Keep learning from others. Control is overrated.”

“Enjoy the ride. Just get in the game.”

“Be surrounded by people you can learn from which is usually more important than whatever you are doing at that moment.”

“Take a moment to reflect and appreciate the good fortune you have had…The story is all yours. It has not been written yet.”