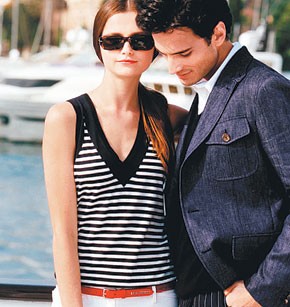 “I will be replacing Mark straight away,” said Maher Mikati, ceo of M1Fashion and an executive director of M1 Group, the Beirut, Lebanon-based entity that bought Façonnable from Nordstrom for $210 million last year. “I will be fully present in Nice [Façonnable’s headquarters in France] after Easter. We have a budget we’re going to stick to and expansion plans that we will stick to.”

Brashear could not be reached for comment. “There was no conflict,” Mikati said. “It was all of a sudden. It was a decision he decided to make.”

M1 hired Interbrand, a London-based brand consultancy, to “refresh” Façonnable, which had estimated worldwide sales of $220 million in 2007. Mikati said he’s not looking for a radical change, but rather an organic evolution of the brand. “We’re not shifting our strategy,” he said. “We would like to build on Façonnable’s heritage of sport chic and French Riviera lifestyle.”

“This is not a brand that’s in distress,” said Simon Stacey, the Interbrand executive leading the project. “The store environments are clearly tired and they’re not clearly differentiated [from other brands]. They’re dark and quite traditional and represent a moment in time. We have to move forward. But we’re not going to become Prada or a minimalist white box.”

Mikati said that pilot stores based on the new concept will be introduced in July in the U.S. and Europe, with a finalized retail concept ready for rollout in September.

M1 will take Façonnable into “new markets and to new customers,” Stacey said. “There is quite an ambitious expansion program. It’s clear that M1 acquired the brand because it saw great potential in what was an underinvested brand.”

Façonnable will open three stores in the U.S. and three in Europe this year. Six new units are planned for the U.S. and six for Europe in 2009, with the same number slated for 2010. The company is targeting Chicago and Las Vegas and considers downtown New York interesting at some point. “We would like to open stores in European cities like London and Milan, cities where we’ll have to have a presence,” Mikati said. “We’d also like to expand into Japan, China and Southeast Asia.”

Façonnable’s exclusive French image is one of its key selling points, but some found the brand somewhat unapproachable. “The product is beautifully presented, but you can’t touch,” Stacey said, adding his job is to figure out “how to make this brand more accessible.”

The company may have entered too many categories for the size of its stores. Stacey said he’d prefer a clearer, more edited product offer.

Nordstrom remains Façonnable’s biggest wholesale customer. “We would definitely like to expand our wholesale network, but Façonnable won’t be in mass distribution,” said Mikati. “We want to maintain our position as a French luxury brand.”