Going forward, she plans each year to do a different beauty product to benefit the organization. 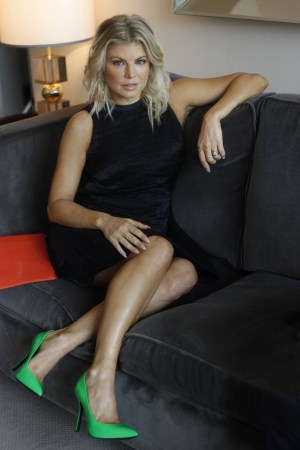 Roughly 50 cents of each $3.49 shimmery sheer pink lip color, part of Ferguson’s CenterStage color collection, will benefit amfAR — a cause that has long been dear to her heart, even before she signed on as Wet ‘n’ Wild’s global beauty ambassador in March 2012.

“For me, it was really important to have a charitable component to my cosmetics line,” Ferguson told WWD in a phone interview before boarding a plane to New York. “I did the MAC Viva Glam campaign [in 2008], and I was very inspired by the cause and motivated to do something myself. Wet ‘n’ Wild has been amazing, and we’ve really pushed this forward and embraced it with open arms.”

Going forward, she plans each year to do a different beauty product to benefit amfAR, à la MAC Cosmetics. “I want to pay homage to MAC Viva Glam,” she said. She will also be honored at the third annual amfAR Inspiration Gala in Brazil on April 5, during which she will receive the amfAR Award of Inspiration. At press time, Ferguson — who will celebrate her 38th birthday on March 27 — had 652,186 followers on Twitter, and she invited all of them to Times Square Thursday, where she will play beauty fairy godmother. “We really wanted to include social media with this,” she said. “We’ll select three winners and feature the makeovers on live television and on social media. [This cause is] very close to my heart.”

Also very close to her heart is her most personal production yet: the child she and husband Josh Duhamel will welcome in September. “I knew I had to get off tour to be pregnant — I wasn’t going to be one of those girls touring with a bun in the oven,” said Ferguson, who nevertheless is keeping quite busy with her makeup line, her fragrances with Avon (she notes that her latest, Viva, is “very fresh, clean and crisp”), her footwear collection with Brown Shoe Co., smartphone and tablet cases with Case Mate, her part ownership in the Miami Dolphins and her partnership with Voli Vodka. “I knew I had to get home to make this happen. I have my hands and plate full now,” she said, noting that new product categories aren’t imminent. “Being pregnant, it’s great to do a lot of work from home. I do it being comfortable and not worrying about hair and makeup. As far as what I’m going to do when the child comes? I have no idea what I’m going to tell you,” she said with a rueful laugh.

As far as children go, Ferguson noted that while Duhamel initially wanted five, they finally settled on two. “It’s important that you want the same thing, if you’re going to go on this path together,” she said.