A week after a fire devastated a Valentino shoe manufacturing plant in Tuscany, the company revealed a plan to help resume production — also thanks to Prada CEO Patrizio Bertelli's solidarity.

MILAN — A devastating fire burned a Valentino manufacturing plant in Tuscany to the ground, but on Friday the company said an action plan has been developed in collaboration with the national unions and elaborated together immediately after the fire.

The fire spread the night of April 1 and 2, ravaging the VSL — Valentino Shoes Lab — in Bucine, near the town of Arezzo, destroying 90 percent of the site.

Investigations into the causes of the fire are ongoing, but there were no casualties and no one was injured because the plant was empty when the fire started.

VSL produced 1,300 pairs of shoes a day, including the brand’s signature Rockstuds, and employed 160 individuals.

In addition to machinery, installations and properties, 38,000 pairs of shoes between finished and semi-finished were destroyed resulting in a loss of several million euros, in addition to more general damages, which have not been quantified yet.

While a temporary solution, the action plan will allow the employees of the shoe factory to return to work and restart production. The Rome-based house in the meantime will continue to manage the emergency situation within at least a one-year time frame.

“I’m touched and moved by the solidarity that was formed within our company, and not only, as an immediate consequence after the devastating fire which has destroyed one of our manufacturing excellences,” said Jacopo Venturini, chief executive officer of Valentino. “The swiftness with which we were able to develop an effective plan of action is an evident consequence of the love that the Valentino employees nurture for our company. Our ambition is to return to produce and manufacture more or less at the same pace that we sustained before the incident, starting next month. This objective has become possible due to various initiatives which, implemented together, will allow us to regularly produce a good part of the seasonal orders.”

Next month, Valentino plans to reboot its production. A number of employees in the VFS site of Montelupo Fiorentino will schedule a double work shift, planning a new organization of the artisanal skills and industrial processes to continue to guarantee the brand’s luxury quality.

“I would also like to thank from the bottom of my heart Patrizio Bertelli, Prada CEO, who immediately contacted us to express his solidarity and by making available one of his factories located a few kilometers away from our production site,” Venturini said.

A number of employees will be able to work in the nearby Prada facility, which was made available to Valentino. The site will host various processes including development, manual craftsmanship and finishing of the women’s shoe collections.

A small number of employees will be relocated in the Logistic VSL hub near the previous structure.

Venturini emphasized his goal from day one to “protect and enhance the value of people,” and said “we are comforted in the knowledge that nobody was hurt” in the fire.  He said the company is focused on managing the situation “in the best possible way, also to reprogram the production activities of the production site in order to minimize the social and economic impact.” 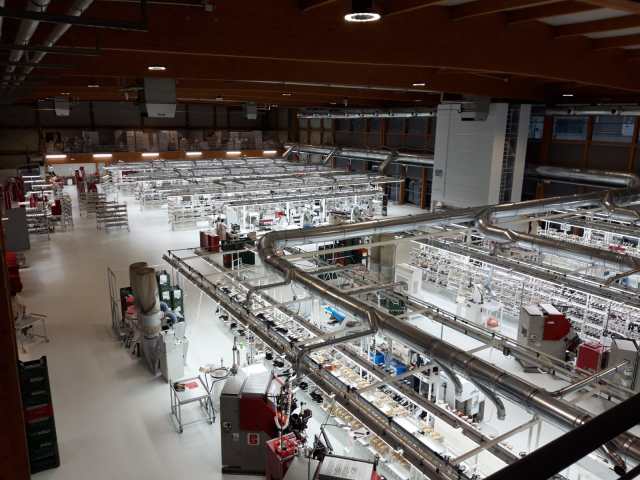 The Valentino Shoes Lab before the fire.  courtesy image