The 10th annual WWD Beauty Inc Awards breakfast reflected the emotional heart of the industry, as top execs gathered to celebrate the best in beauty. 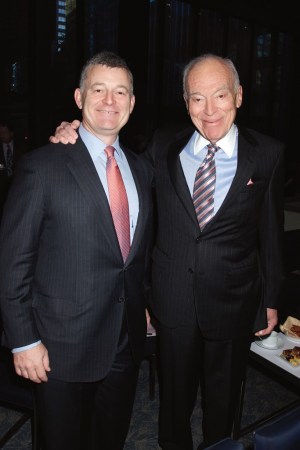 The 10th annual WWD Beauty Inc Awards breakfast reflected the emotional heart of the industry, as top execs gathered to celebrate the best in beauty. Evelyn Lauder was honored posthumously with the first Corporate Social Responsibility award for her work in eradicating breast cancer. “This is a bittersweet honor,” said William Lauder, executive chairman of the Estée Lauder Cos., as he accepted. “My mother was a great influence to many of us.” The crowd, including Terry Lundgren, Fabrizio Freda, Frédéric Rozé, Pamela Baxter and Ingrid Jackel, rose to give Lauder a standing ovation as he took his seat next to his father, Leonard. Also there was Celeste Owen-Jones, the daughter of L’Oréal legend Sir Lindsay Owen-Jones who was honored with the 2011 Visionary Award. “My father is extremely passionate about what he does,” said Celeste, accepting on her father’s behalf. “When he believes in something, he will do everything he can to make it happen.”