A staunch advocate for women's rights and equal rights, Ford spoke publicly in favor of abortion and federally-funded daycare. 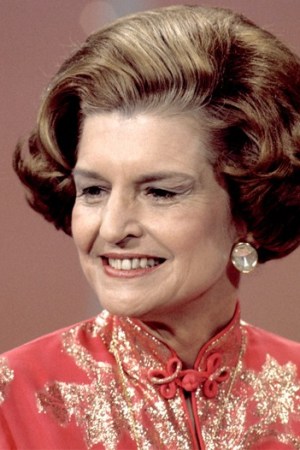 Former first lady Betty Ford very well may be remembered for her actions more than her personal style. But those who her knew her said she always left an impression.

Ford, who championed women’s rights, equal rights, substance abuse treatment, breast cancer and a myriad of other taboo subjects in the Seventies, died Friday at the age of 93.

A former model and accomplished dancer with a sharp mind and wicked sense of humor, Ford ushered in an unprecedented sense of openness to the White House, by welcoming an array of personalities to American-themed state dinners and giving the media all-access coverage. The Michigan native was also unguarded about her own personal strife whether that be against alcoholism or prescription pain killers.

The daughter of a U.S. Rubber salesman who sold conveyer belts to factories, Ford grew up in the furniture capital of the world, Grand Rapids, Mich. In an exclusive interview with WWD in 1974, she said, “I’m just a plain normal gal who was happy that she married someone she thought was going to be a lawyer.”

So at ease with the media as she was, Ford was known as just plain “Betty” by the press corps. And her press secretary, Nancy Howe, was beyond being on a first-name basis, preferring to call the sunny and diminutive first lady “Petunia.”

But friends noted how the keenly intelligent and size 8 ex-model and former Martha Graham dancer took to her new station in life with “Pat Nixon-perfect poise and posture” and the advantage of being a good hand-shaker. The artist Andrew Wyeth’s son Jamie described her as “quite beautiful in a regal way.” But apparently she never lost her bearings. One longtime pal said of Ford in 1974, “I like her modesty, the fact that none of this has changed her one bit. She’s plain as an old shoe, but sharp as a tack.”

Former social secretary Maria Downs said Sunday, “I told her, ‘In your position now, you’re probably one of the most influential nonelected people in not only Washington but also in America. And she said to me, ‘Well, don’t tell anyone.’ She did realize what she could accomplish and influence by using the White House for entertaining and how that played into all that was being done with the administration and the presidential dealings.”

Self-deprecating as that sounds, Ford was shrewd about advancing women and U.S.-made goods. State dinners called for round tables so that women did not feel as though their designated seating was determined by their husband’s profession. Ford made a point of giving each state dinner an Americana theme to draw attention to the country’s finery by customizing centerpieces with Steuben glass or the candlesticks made from spools used in New England textile mills.

At the first lady’s request, Downs was always on the alert to make any guests who appeared in awe — as was once the case with Clint Eastwood — feel more at home in the White House. Heavily involved with every last detail that fell under her watch, Ford gave great consideration to guest lists, ensuring that Willie Mays met Queen Elizabeth at the white-tie dinner that was held in honor of Her Royal Highness. Halston, Martha Graham and Andy Warhol were among the numerous visitors who dined and danced the night away with the Fords, who liked nothing better than tearing up the rug. (She even did the disco move “The Bump” with the comedian Marty Allen at a White House dinner-dance.)

A former department store model and fashion coordinator, Ford saw to it that her gatherings called for long white gloves. Downs, who works in the White House archives, said, “Now the dress at the White House is so relaxed. In those days, there was a very good line about how one dressed when they came to the White House, whether it was for a social event or work. It’s not a criticism. It’s just the way it is.”

As for Ford, she was “extremely interested in fashion” and liked such designers as Halston, Bill Blass, Albert Capraro, Oscar de la Renta, Christian Dior, Geoffrey Beene, Pierre Cardin, Kasper and Jim Baldwin. Ford once told WWD, “I always try to wear something outstanding and as becoming a dress as I can find. I don’t believe in the dumb dress.”

Arnold Scaasi, who met Ford a few times in Washington, described her Sunday as someone with “enormous charm who always handled herself very well.” As for her fashion sense, the designer said, “She dressed very well but was quite conservative. She always looked like the head of an office and I guess she was. She didn’t ever wear anything outlandish. She never wore anything to shock the public.”

While Ford was not known to make waves by the way she dressed, she wasn’t afraid to be seen with those who did. For a night at the opera in New York in the Seventies, the first lady stepped out in delicate diamonds and a chiffon gown, but her escort, Woody Allen, opted for a tux with Converse Chuck Taylors — a high-low combo so unseen that photos of their arrival was beamed all over the world. Ford was pictured around that time looking equally cozy with Liza Minelli at Studio 54, seated on the top of a banquette near Halston. But unlike Minelli, who partied in a breast-baring glittery pantsuit, Ford stuck with an evening gown, albeit a metallic and tastefully sheer one. Her day-to-day signature look often meant a casual chic scarf and masses of family jewelry, including an onyx men’s ring with diamond chips from her mother-in-law, a gold presidential pin surrounded by seeded pearls and four gold bracelets, including one with honey bee charm, a wink at her husband’s nickname. “I call him ‘Honey,’” she said.

A big proponent of American fashion, the former first lady knew that such cheerleading could stoke criticism, especially as inflation and the energy crisis gripped the nation. Ford clued in voters to the first family’s cost-cutting ways for food bills and entertaining. She didn’t hide the fact she would rather dye old shoes than buy new ones for special events, or that buying cosmetics in bulk saved money. And in 1974, she let it be known that she had signed a consumer’s pledge, vowing to buy only products and services that were at or below existing costs. (A decade earlier, the Fords showed their thriftiness by having their four children pitch in for a condo in Vail, Colo., by pooling their money.)

One of only three first ladies to have been divorced before becoming a presidential wife, Ford had the distinction of becoming the first to appear in a sitcom by making a cameo on “The Mary Tyler Moore Show.” And when her husband was silenced by laryngitis on election night in 1976, Ford reached another first by giving his concession speech. Regardless of the circumstances, Ford rarely shied away from making her points — and there were many — known to the public. In an exclusive interview with WWD in 1973, she said she approved of abortion, especially “for some high school girls who are forced to marry, have their babies and end up in marriages that are fiascoes.”

Despite having been besieged with hate mail for her remarks, Ford told WWD a year later, “Maybe I shouldn’t have said it, but I couldn’t lie. That’s the way I feel.”

She was just as candid with this newspaper about undergoing psychotherapy (“because I was having a hard time getting Jerry out of politics”) and her habit of taking tranquilizers, namely Valium three times a day, to ease the pain of a pinched nerve in her neck. And when that practice became problematic, Ford shared the ordeal of addiction in a very public fashion. In fact, during the course of her husband’s administration and in the years that ensued, she also spoke out about women’s rights, equal rights, abortion, federally funded day care and the arts. In a statement released Friday Bill and Hillary Rodham Clinton said, “As a staunch advocate for women’s and equal rights, Betty paved the way for generations of women to follow. Her courage, compassion, and commitment to helping our nation deal with drug and alcohol abuse and addiction helped thousands of people to a successful recovery and in the process she helped to save countless families.”

Her own personal battles with alcoholism, prescription drug addiction and breast cancer helped encourage others to seek treatment. Since that time, thousands of people have fought substance abuse at The Betty Ford Center, which she established in Rancho Mirage, Calif., in 1982.

Ford was also candid about how her first marriage ended in divorce and the benefits of psychotherapy, other topics of conversation that were not warmly accepted in the Seventies. She also told WWD that unlike most of their predecessors, she and her husband would share a presidential bed. “We’ve been doing it for 25 years and we’re not going to stop now.”

More recently, Ford wrote a warm letter to Michelle Obama when she took residence at the White House. Ford reportedly told her daughter Susan, “I don’t know if she knows what she has gotten into. She is really going to be busy.”