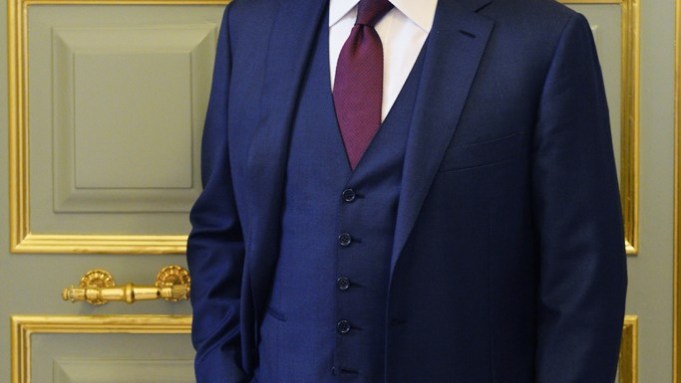 After spending 17 years at Brioni and steering the brand’s integration into the Kering Group, Francesco Pesci has acquired the necessary skill set to build an international brand. And it’s those skills that he’s bringing to Peuterey Group SpA, the outerwear brand he joined as chief executive officer at the end of January.

In March 2014, the Tuscany-based company — which owns the Peuterey, Post Card, Geospirit and Aiguille Noire labels — hired Deloitte as an adviser to help find a partner to fund its international growth. A big first step came after Pesci joined the family-owned business, succeeding Francesca Lusini, daughter of the founder, who remains president. Her brother, Giovanni Lusini, oversees marketing and advertising.

The Peuterey brand is seen as the company’s primary growth vehicle and Pesci plans to significantly expand its wholesale exposure in the U.S. and its retail presence in the Far East.

Pesci’s first task was to develop a six-year business plan, he said during a visit to New York. That plan “aims at growing our company outside of Italy, which accounts for 72 percent of our sales,” he said. In 2014, the company had volume of 80 million euros, or $89.6 million at current exchange, down 11 percent from the previous year.

Pesci said that, outside of Italy, the company’s strongest market is Germany, which accounts for 10 percent of sales. “But we’ve identified two of our biggest markets for growth: China and the U.S.,” he said.

In the American market, only the Post Card and Peuterey women’s wear are currently sold. The Post Card brand is women’s only and its “DNA is connected to the ski world,” he said, adding that it is inspired by luxury mountain resorts.

Peuterey is dual gender and its women’s collection is sold in the U.S. at retailers including Neiman Marcus and Bergdorf Goodman.

Pesci said the higher-priced Post Card label “will remain as a niche brand,” and the company does not expect to aggressively market it. But Peuterey is a different story. “Peuterey is our global brand,” he said. “And we’re focusing on building that brand for next fall.”

The Peuterey name is “very well known in Italy and Germany, but not in the U.S. We see enormous potential for it in the U.S., but it needs to become better-known,” he admitted.

This is especially true of the men’s product. “The female consumer is more open to experimenting,” Pesci said. But he’s confident that once the male shopper becomes familiar with the modern aesthetic of the product and its technologically advanced materials and detailing, he’ll give it a try.

In the U.S., Pesci is hoping to launch the men’s wear at high-end department and specialty stores.

Beyond the wholesale plan, Pesci revealed the company is also planning to open a Peuterey shop in Manhattan, possibly as early as the fall. “If we want to put the brand on the mental map of consumers, we need a store,” he explained.

In Europe, the company operates 10 flagships, and there are an additional 15 stores in the Middle and Far East.

Pesci said the company is also looking for space in New York for a showroom. “We can’t succeed here without a local presence,” he said.

Peuterey, which is named for a mountain peak in Italy, was started in 2002. Its logo includes three red dots in the shape of a triangle, a symbol that references the three peaks of the mountain. It was conceived as a technical ski brand and Riccardo Coppola serves as the brand’s creative director. The fall collection is inspired by photojournalists and includes parkas and field jackets in pin-striped wools, plain wools and technological fabrics.

Pesci said Coppola, who has been with the brand for 13-plus years, “had the idea of using technical performance features that characterize the ski market for the urban market.” The strategy was successful, and today, Peuterey’s slogan is “technical outerwear for urban explorers,” Pesci said.

Its primary competition is Moncler and Canada Goose — two of the fastest-growing brands in fashion — but Pesci said “while we play in the same league, we’re different taste-wise.”

Pesci said the plan over the next six years is to grow sales six to seven times its current volume, with the bulk coming from the U.S.

“We don’t expect to overtake Italy in the next three to five years,” he said. “But we expect the U.S. to grow the most.”