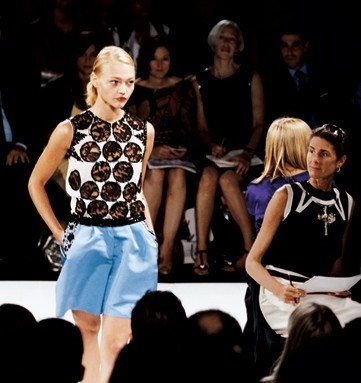 Sasha Pivovarova’s life is one dreams are made of. The catwalk superstar was discovered a scant two years ago, when her then-fiance, now-husband Igor sent pictures of her to the modeling agency IMG. Two weeks later, she opened the Prada show. two years later, the Moscow native is the face of Prada and Giorgio Armani Cosmetics, among others, and has appeared on countless magazine covers, including American, Italian and British Vogue. For those who have wondered what life is like for one of fashion’s hottest faces, Pivovarova gave us an all-access pass for one hurly-burly day during New York Fashion Week. Let the mayhem ensue.

“The most important part is the feeling of satisfaction when it’s over,” says Pivovarova, who on this day, Monday, Sept. 10, wolfed down a coffee and pastry near her Williamsburg, Brooklyn, home before heading into town for a day that would end about 14 hours later. She walked in the Carolina Herrera, Anna Sui and Oscar de la Renta shows, while squeezing in fittings at Zac Posen and Donna Karan. Though her sculptural bone structure and icy blue eyes give Pivovarova a fierce mien, in person she’s irrepressibly sprightly. No surprise then that when asked what’s going through her mind as she stalks the runway, her answer is immediate. “I just think happy thoughts.”

“The fashion shows are the most dynamic part of my life,” says Pivovarova, who heads to the beach for a month to marshal her energy before fashion season kicks off. Moving from city to city, working
16 to 18 hours a day, walking in four to five shows a day — it’s like the Olympics of modeling.”