She has combined an uncanny ability to identify white space with an insatiable appetite for learning and a true passion for products. 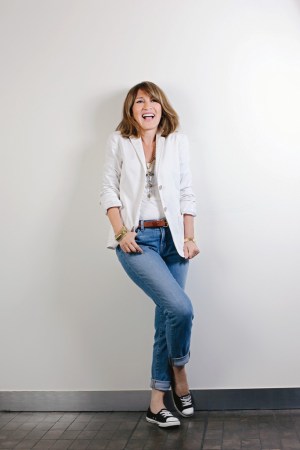 This story first appeared in the October 7, 2013 issue of WWD. Subscribe Today.

With no advertising money to rely on, Federici housed the serum in a dropper bottle designed to send the message that Frizz-Ease was a prescriptive approach to a problem.

“Our whole message was right there,” says Federici. “If you were looking, you got it.” A lot of people got the message: In 2002, the pair sold John Frieda to Kao Corp. for $450 million. Facing a non-compete, Federici, who is married to musician James Smith, turned her attention to the music industry. But soon she was struck with another aha moment—unsightly gray roots—and the concept for Color Wow Root Cover Up was born. The solid powder pigment, which looks like an eye shadow palette, is part of her new Color Wow line available at Ulta and on QVC. Federici and Frieda reunited to create the brand to address problems common with color-treated hair, including roots, brassiness and dull texture.

“We identify a problem that is pervasive and our whole objective is to fix it,” she says. “We deal with specific issues… I am analytical to a fault, which is why I think we have the success that we have.”

What inspires you when you’re developing products?
Necessity is the mother of innovation. It started with Frizz-Ease. I have really frizzy hair. It was a problem and I thought there had to be a solution. When you are starting a company, you have to figure out where you fit in the whole arena. I said to John, “We’ll never outspend P&G and L’Oréal, so we’re going to have to outthink them. What do we have that they don’t have? We have to be true to our professional heritage and we need to be a problem–solution brand.” That was how we started. We identified problems and found real solutions. With Frizz-Ease, it occurred to me that skin-care companies have a whole range of products for different types of skin. Hair-care companies never did that. Every single styling product on the market was to add body to hair, with alcohol and resins that were not good on dry, frizzy hair. We needed to develop products for this hair type. I called it a blinding glimpse of the obvious—BGO. There was a hole in the marketplace, and it was easy to come up with a solution.

Your bio refers to you as a “serial entrepreneur.” What drives you to create new products?
I don’t want to not do something. My mind would go to a bad place if I didn’t. Somebody once said I’m the type of person who needs a home for her mind. In the music business, I like thinking about artists and how to position them. That’s why I’d like to work on a political campaign. It’s all strategic. In business, the things that helped me were reading about strategic minds, particularly political campaigns. It’s very interesting to see how campaigns are run. [In beauty] sometimes marketing people can be in their own world. They never ask enough about the sales and how the public relations is translating. In a [political] campaign, every morning they try to determine how many votes will they get in a certain state. What’s the count? What did we do there and what was the impact?

I told [my marketing team] I want you to think of products as little political people. They are your candidates. And every day I want you to think about how many votes do we have. The fun to me is knowing if that copy worked or didn’t. It’s getting there that I really like, the process. For John Frieda Sheer Blonde, we put together a product package that we thought was genius. We went down the street to CVS and put it on the shelves. For a few hours we watched every blonde walk right by it one after the other. I realized that because the words Sheer and Blonde were in the same block you almost didn’t read Blonde. We went back and made the Sheer small and the Blonde bigger, and then went back to the store and every single blonde stopped. I’m not a believer in focus groups. You have to want the bad news. People want their idea to work, and they want positive input. And that’s a downfall for a lot of people. It’s important to look for the bad news.

What does it take to be a successful entrepreneur in beauty today?
It’s harder in a lot of ways because you are spread so thin. When we started there were countless number of [mass retail] chains. If a big chain didn’t take you, you could go somewhere else. When there are only a couple of players in town, they say, “Jump.” You say, “How high?” We could negotiate. We never paid a listing fee. If they want you out and there are only a couple of retailers, you are in trouble. And then there is the Internet, which isn’t easy to figure out. I haven’t been the biggest fan of Facebook. Because the pages are so messy it’s hard to get your image across or give a sense of who you are. I love Instagram, and I was a huge fan of MySpace for the music business.

I loved doing ads, but now people aren’t buying magazines like they used to. And on TV, people are flipping right by them. Our TV ads worked so well, we could literally put our feet up afterward. It was really fun trying to figure out the best way to do it. For the first Frizz-Ease ad, I said to John, “Let’s just do a rough video ourselves before we film. Let’s do one where we see you doing hair and one where we just see hands and then we see your face.” We did it both ways. There was no question that the [latter] was the way to go. He seemed like the authority. Not just some hairdresser in a salon showing you about some product. I love to figure those things out.

How do you approach product creation?
It starts with what isn’t working out there. What would I like? Does this have a big market? In music, I wanted to work in pop. I didn’t care about left of center because that doesn’t sell as much. I didn’t want an alternative band. I wanted it straight down the middle for the masses because if I am going to work hard, I want it to have the biggest payoff. I felt that way with Frizz-Ease, too. People said “It’s niche.” And I said, “Okay, you keep thinking it’s niche.” It’s not niche. Millions of people out there have frizz.

How do you balance intuition with analytics and consumer research?
I don’t really believe in the word intuition. It’s not intuition. It’s me analyzing a behavior, or what is going on. Women grow up analyzing dates: “He said this. I said that. What do you think this means?” Men come back from a date and flip the sports on [the TV]. I understand human nature. With trends, I use information to figure out strategies. I love numbers—the more I can get the better.

Why do you think there is so much sameness across the industry?
The reason we did what we did with Frizz-Ease is that we weren’t marketing cereal the week before. We live and breathe what we do. We know it inside and out. We really understand the issues. I don’t follow trends because that’s not fun for me. I want to make a difference. Everyone is saying we need to make a dry shampoo for Color Wow. My response is that there are enough out there and they do the trick. If we could do something way better, I would do it. When you are a big public company and you have your quarterly [numbers] to meet it’s a different mind-set. When you are that big you kind of lose touch with consumers, because a lot of people are making decisions. There’s almost no cohesion— it’s easy to lose your way.

As a brand creator, when do you know it’s time to move on and sell your brand?
We were offered a lot of money about four years in. I said, “No way, we’re just starting here.” And John agreed. Other people would come along and we would talk to them to buy more time before they tried to knock us off. At the very end, it began to take up a lot of our time. We didn’t really want to sell at all. We had told potential buyers unless they gave us something close to $500 million don’t bother us. We got an offer of $350 million. And I said to John, “We still have a path here,” so we told them $500 million. I called the lawyer back directly to decline and asked to part as friends. Almost the next day, the phone rang and [Kao] offered $450 million. I hung up and said to John, “It would be irresponsible to our families not to take this.” You couldn’t push it any further.

What are the parallels, if any, between the music industry and beauty?
For me, it’s always about the creative process. It has to do with being able to identify talent. It wasn’t me who was responsible for everything by a long shot. We had such amazingly good people. I like dealing with really smart people. They can be crazy. People say, “How do you put up with that?” I put up with it because they are so gifted. People aren’t all perfect.

How do you unwind?
I like to travel. I love to read. That is my favorite time—going into my books. If I’m reading history, which I almost always am, I have a pen in my hand. I’m reading The Last Lion, about Winston Churchill, and I’m reading the last book in the trilogy. I just read four fabulous books about Teddy Roosevelt.

I became a big fan. I read [Zappos’ chief executive officer] Tony Hsieh’s Delivering Happiness. I’ll read business books because I learn from them. When Jack Welch’s books came out years ago I’d read them and assign different chapters [to people in the organization]. I like to learn enough so that I’m not going to be blindsided.

In Brief
By the time Gail Federici met John Frieda, she was well entrenched in the hair-care industry. She began her career in 1979 at Zotos, while attending University of Bridgeport Law School (which is now Quinnipiac University School of Law) in the evenings. Zotos was purchased by Conair Corp. in 1983, and Federici stayed on as corporate vice president of creative, marketing and public relations until 1989, when she left to develop the John Frieda brand. After selling the company to Kao Corp. in 2002, she plunged into the music world, reentering the beauty sector in 2007 as president and chief executive officer of Federici Brands with Time Bomb skin care. Her latest endeavor is Color Wow, which launched this year.