The executive, a former top designer at H&M, sat down for an exclusive interview with WWD on Monday. 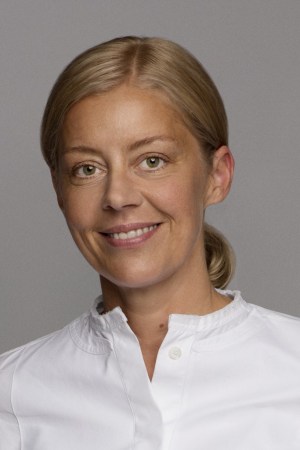 Gap, the all-American casual brand, has decided that its vision for the future should be filtered through a European designer with a Scandinavian aesthetic.

Nevertheless, Rebekka Bay, a former top designer at H&M who on Monday was named creative director and executive vice president for Gap Global Design, said in an exclusive interview with WWD on Monday that her mission will be to build upon the heritage of the brand. “Gap has great potential as a lifestyle brand,” said Bay, who was born and schooled in design in Denmark. But she emphasized that with Gap, “It’s important to continue to [build upon] the product’s American heritage. Gap is the brand that owns casual fashion. It can take more ownership over casual.”

She sees the opportunity to introduce a more sophisticated range of colors to Gap, more prints, more washes, and said that, long term, the company will be able to add lines to broaden the range of styles. She said the mission will be to deliver high-quality, well-priced products, not just seasonally but trans-seasonally. Gap, while recently performing well, has for about a decade found it difficult to deliver consistent, stylish, quality product.

“I am superexcited about joining Gap and I don’t know if I fully understand the size of the task,” Bay said.

The stock market applauded Bay’s appointment, though, sending Gap Inc’s shares up 2.4 percent to $36.05 in a generally tough day for retail shares.

Over the next few weeks, Bay will relocate to New York with her husband and seven-year-old son, and will be based at Gap’s Global Creative Center on Thomas Street in lower Manhattan. Her impact on the Gap collection will first be felt in the second half of 2013.

Asked what is working at the brand right now, she said the company has great khakis and great denim, as examples, but potentially could “own more product categories.”

Bay succeeds Patrick Robinson, who left in 2011, but actually has a bigger role since she will be creative director, a title Robinson didn’t have. She will develop the vision for the entire Gap brand, including working on the marketing and communications, and, as executive vice president, will have global responsibility for Gap women’s, men’s, 1969, accessories and body lines.

She will report to Art Peck, president of the brand’s North American division, and Stephen Sunnucks, president of Gap Inc. International. She will also work closely with Pam Wallack, who leads the Gap Global Creative Center; Seth Farbman, who leads Gap’s marketing team, and Jennifer Giangualano, head designer for kids and baby. Gap said Tracy Gardner will continue as a creative adviser to Gap.

Like Robinson, Bay will be high profile at the Gap, particularly with the media at fashion shows and presentations, and to convey the brand message, though she is not as gregarious as Robinson tended to be.

“I am very hands on,” Bay said during the interview. “I like the behind-the-scenes work. My main focus will be developing the product. That’s what I came here for,” though she added that she is “more than happy” to communicate the vision and serve as a voice for the brand.

She joins Gap Inc. at a relative good time for the $14.5 billion company, which has experienced two positive quarters and seems to be gaining momentum, though it is too soon to say that, after years of negative comparable-store sales and declining traffic, it has been turned around. The Gap brand last month saw comparable-store sales rise 9 percent.

“We’re confident that Rebekka’s approach to design, along with her considerable international experience, will allow her to help us build upon the momentum we’re delivering in the business today,” said Sunnucks.

The 42-year-old Bay, according to Gap, was selected because she has had more than two decades in design and can articulate a vision. In 2006, she conceptualized and developed COS, the higher-priced line of H&M that sells in Europe, Asia and the Middle East and is expected to make its way to H&M in the U.S. Since 2011, she has been with the Danish brand Bruuns Bazaar as creative director, overseeing the design of women’s and men’s wear. Gap said that at Bruuns Bazaar, Bay was instrumental in creating a strong signature for the BZR and Bruuns Bazaar collections and built upon the strong Scandinavian heritage of the brand.

The Danish aesthetic, she said, is in her DNA, and will, to some degree, affect her work and the taste level she brings to Gap. She defined it as “very functional and modern and based on great craftsmanship and design. The approach to design is very craft based. The material itself can carry a good part of the design.”