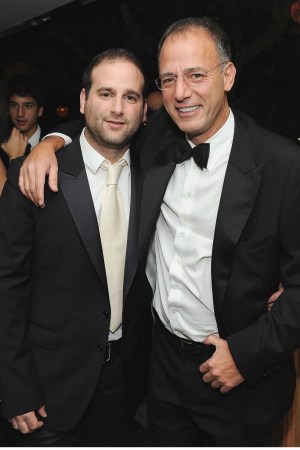 Surrounded by fashion veterans including Guez’s brothers, Paul and Hubert, and celebrities such as James Gandolfini and Vanna White, Guez received the Spirit of Life Award at the Soho House in West Hollywood. Befitting a charity that sits at the nexus of Tinseltown and trend-obsessed Los Angeles, City of Hope featured a silent auction that included items such as a walk-on role in ABC’s breakout hit “Revenge,” a guitar autographed by Richie Sambora and a $1,000 gift card for William Rast, which was founded by Guez’s nephew, Danny Guez. The gala raised more than $1 million.

Guez accepted the award as he marked his fourth decade in the apparel business. Now 55, he started working in fashion when he was 15 in Lyon, France. In the early Eighties, he started Sasson Jeans with his brothers and went on to found Tarrant Apparel Group. After Tarrant went private in 2008 and changed its name to Sunrise Brands, it began launching new brands such as Dylan George, another Danny Guez project, and Abbot + Main to offset its private label business. The branded business now makes up about half of Sunrise’s sales.

“We’ve been growing at a 30 to 40 percent clip for the past three years,” Guez said. Although he didn’t disclose Sunrise’s annual sales, he said one option for the future is taking the branded business public.

Among Guez’s new ventures are opening eight to 10 additional stores in New York, Las Vegas and San Francisco next year for Superdry, a men’s and women’s contemporary brand that already operates 10 stores. He also plans to introduce casual sportswear under license for an as yet unidentified American designer in the fall 2012 season.